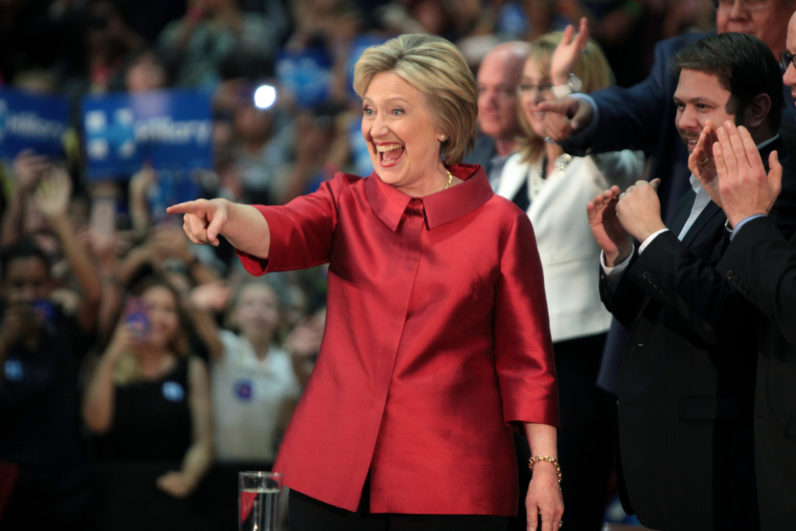 After Hillary Clinton’s shock election defeat last year, the left began a prolonged period of soul-searching. It thought about the nature of Internet filter bubbles, and why its message ceased to resonate with white working-class voters, which once was a core part of the Democratic base. It swore to never repeat the mistakes that catapulted a dangerous, unbalanced, thoroughly unqualified reality TV star into the the Oval Office.

No, they haven’t learned a thing. Just eight days before the release of Hillary Clinton’s tell-all memoirs of the 2016 campaign, the former Secretary of State has taken time out from her busy schedule to endorse a little-known media startup, called Verrit.

I'm excited to sign up for @Verrit, a media platform for the 65.8 million! Will you join me and sign up too? https://t.co/bOLSMyk6bG

Verrit essentially packages factoids – but not just facts, quotes too – into sharable little images you can blast your Facebook and Twitter with. These come with an authentication code, allowing you to ostensibly check the veracity of the text, in case it’s been doctored.

In an interview, Peter Daou, who advised the Kerry 04 and Clinton 08 campaigns, said that these images are “information you can take out to social media when you’re having debates on key issues people are discussing.”

Generally, I’m in favor of anything that aims to elevate the standard of debate. God knows it’s necessary. But Verrit isn’t the silver bullet we’ve been looking for.

For starters, the phrase “a media platform for the 65.8 percent” should give you pause. It refers to the number of people who voted for Clinton, which immediately undermines its credibility, particularly in a country that is increasingly polarized between its two political extremes.

From the get-go, it’s apparent that Verrit isn’t about building bridges or creating understanding, but rather pushing a particular narrative. Daou himself has said as much.

4. @Verrit is necessary because if you're #StillWithHer, you endure constant harassment and bullying from the radical right and fringe left.

Yeesh. Moving on, can we talk about the medium? Yes, image macros play an unfortunate role in online political debate. They allow you to cram more text than you otherwise would in the confines of a 140-character tweet, and use more eye-catching styling.

But there’s also the problem that most of them are, in some way, utter bullshit.

One example that comes to mind is Trump’s bogus (and utterly debunked) tweet about the rates of violence perpetrated by African Americans. I’ve seen plenty of obviously fake nonsense from the left, too. Both sides are guilty.

Ultimately, the medium has as much a credibility problem as the platform itself. And Daou wants us to pepper our online debates with these pictures? Does he not realize that will make reasonable people – both on the left and the right – immediately switch off, just like they do when they get an email that starts with RE:FWD:FWD:RE:RE:RE:RE?

And isn’t there something just incredibly obnoxious about dropping someone else’s content in the middle of a conversation? It’s just so smug and gross, and again, it’ll make people switch off.

I’m also not entirely convinced by the concept of the authentication code, which seems like a White Elephant. By-and-large, people share first, and check later (or never). How many people do you think fact-checked the story that said Pope Francis endorsed Trump? Or the story that Sanders said the election was ‘rigged’ and unendorsed Clinton? It seems unrealistic that anybody will use this feature.

Confession time: I’ve got a dog in this race. Personally speaking, I lean towards the center-left, just like Clinton, and I’m a big fan of the former first lady. Moreover, my wife is American, and I visit the U.S. several times a year. Who knows, maybe one day I’ll build a life out there. I think I’d like that. The U.S. is a great country, in literally every sense of the word.

That just amplifies my sense of disappointment with Verrit. It’s just so disheartening. Is this the best we’ve got? Is this our best idea, and that’s why Secretary Clinton used her influence to endorse it?

Read next: KFC lets you pay for meals with your smile in China