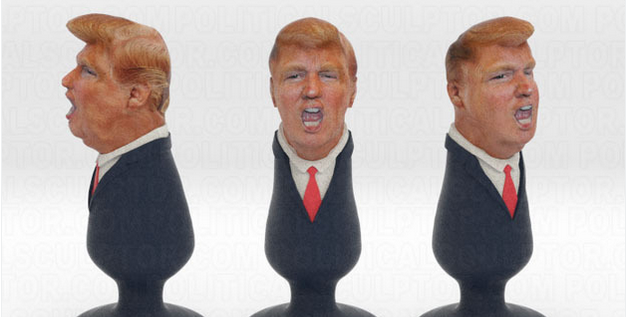 Donald Trump is running for president with all the grace of a three-legged dog chasing a ball and with absolutely none of the cuteness. One of the many unpleasant jibes in his campaign announcement last month was about Mexico:

Fernando Sosa, a Mexican-born US citizen, has the perfect response. He specializes in using 3D printing for political satire and has previously made caricatures of Hillary Clinton, Vladimir Putin and Kim Jong Un.

His take on Trump sums up ‘the Donald’ more directly than a late night monologue or ‘Daily Show’ spot: It’s a butt plug.

Sosa passionately explains his reasons for creating the object on his Shapeways page, where it is available to buy for $27.99:

[This is my] response to Donald Trump’s remarks…I say screw you and your Republican Party. I was not sent here by the Mexican government. I came here with my family thanks to my step-father, who is also an immigrant from Finland. We came here looking for the American Dream and my parents worked their butts off so my brothers and I could go to college or serve in the armed forces.

I’m no rapist and no drug dealer. I have a college degree in 3D animation and run my own 3D printing business and guess what? I can make you into any shape I want and 3D print you and sell you to others who share their dislike of you.

…You are a public figure and me making you into a butt plug is freedom of speech. Welcome to America, motherfucker!

It’s an eloquent disavowal of Trump’s claims and politics, but in the end, a satirical butt plug is worth more than a thousand words.

Here’s how TNW HQ responded to seeing the TrumpPlug:

Follow us on Snapchat for more of this kind of stuff:

Read next: Watch an incredible 3D-printed Batman suit in action