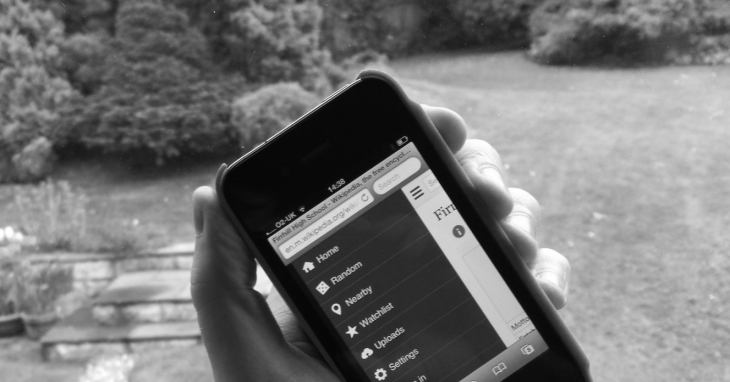 Wikimedia Foundation, the charitable organization behind Wikipedia and other online collaborative projects, has introduced a new Nearby page as it looks to surface articles based on a user’s location.

Back in January, the Wikimedia Foundation announced a new GeoData extension for MediaWiki, which promised to provide a “structured way to store geo-coordinates for articles,” this was in addition to an API so developers could build tools based on this data.

In real terms, this means that location coordinates associated with articles are stored separately in the Wikipedia database which makes it easier to ‘query’ the coordinates of a particular Wikipedia page. It’s all about mining and mapping.

One of the first uses of this data was in the experimental mode of the Wikipedia mobile site, which allowed opt-in beta users to see a list of articles based on their location – this was particularly useful for those looking to read more about places nearby. But also, it could help encourage users to contribute to Wikipedia with photos taken on their smartphones.

“We’d like to be able to show users a map of articles needing images near their location, so that they can easily take and upload photos of subjects around them missing an illustration,” explained Max Semenik, a Wikimedia Foundation Software Engineer.

To help facilitate this, Wikipedia was enabled with photo uploads via the mobile Web back in March, though the bigger vision here isn’t necessarily restricted to locations ‘nearby’. It’s just that you’re more likely to upload photos of places near where you are. The Wikipedia Nearby feature is currently available as a beta feature, though it’s no longer restricted to experimental mode. Oh, and the good folks behind it are actively seeking your photos too.

“Thanks to the terrific work of our editor community, Wikipedia has accumulated a massive amount of location data associated with its millions of articles; until now we have not fully taken advantage of this information,” says Jon Robson, Software Engineer, Mobile at the Wikimedia Foundation.

“We are happy to announce that the Wikimedia Foundation mobile team has been working on a Nearby page to surface this information,” he continues. “Along with the goal of bringing awareness of the surrounding areas to our existing readers, we hope that this simple tool can attract new editors to these articles, whether it is to update the information on the exhibits in a local museum, or simply to add a photo of a nearby park that is in severe need of a properly licensed lead image.”

This Nearby page is accessible via the main menu in the mobile Web version of Wikipedia. Click on it, give your permission for it to access your location, then you’ll see a list of Wikipedia articles based on where you are located.

As noted, this can be a useful way to read about places close to home, but you can also see at a glance articles that have no illustrative content. When you access these pages, you’ll see an ‘Add an image to this article’ button – but only if you’re logged in.

Robson adds that they are specifically looking to surface articles without images, but this number will obviously vary depending on where you live – if you’re in the heart of London, there’s probably less need for your input than in the middle of the country.

Though there are native Wikipedia apps available, developing countries have been particularly instrumental in the rise of the Wikipedia mobile Web through feature-phones. Earlier this year, it announced 3 billion monthly mobile page views via the Web, and was aiming or for 4 billion by June.

Although it’s designed for mobile, Wikipedia Nearby is also accessible from your computer. “In the future, we envision this as a useful step in the editing onboarding process, helping new users learn about editing by encouraging them to improve an article on a topic nearby,” adds Robson.