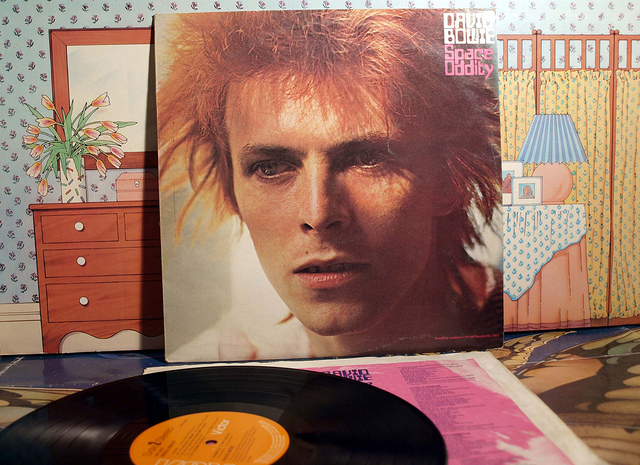 Musician David Bowie is known for a lot of things, namely his music and choice of wardrobe. On Sunday, the man who turned himself into “Ziggy Stardust” turned 65. Ten years ago, Bowie made a bold prediction about copyright and the music industry that has recently resurfaced.

In an interview with the New York Times, the man who has sold 140 million albums suggested that he soon wouldn’t want to be on a label because copyright would be dead by 2012. It’s 2012 and copyright isn’t dead, but he’s not far off with his predictions:

I don’t even know why I would want to be on a label in a few years, because I don’t think it’s going to work by labels and by distribution systems in the same way. The absolute transformation of everything that we ever thought about music will take place within 10 years, and nothing is going to be able to stop it. I see absolutely no point in pretending that it’s not going to happen. I’m fully confident that copyright, for instance, will no longer exist in 10 years, and authorship and intellectual property is in for such a bashing.

Music itself is going to become like running water or electricity. So it’s like, just take advantage of these last few years because none of this is ever going to happen again. You’d better be prepared for doing a lot of touring because that’s really the only unique situation that’s going to be left. It’s terribly exciting. But on the other hand it doesn’t matter if you think it’s exciting or not; it’s what’s going to happen.

If you take out the bit about copyright not existing, Bowie is right on target. Everything about the music industry has indeed changed, and he called it way back in 2002. With services like Spotify and Rdio allowing listeners to wade through massive databases of music, the idea of purchasing an album is becoming extinct. Of course Apple’s iTunes isn’t suffering at all, but I’d bet that complete album sales are showing signs of fatigue over the past few years.

Not all musicians are embracing new technologies, as we learned with Coldplay’s stance against streaming music. The band wants to control its own distribution and doesn’t allow its music to be streamed. With digital music sales surpassing physical last year, we’re not done with the evolution of music yet.

For new artists who are trying to gain a following, touring is the best option to get in front of fans. No longer do you need a label to get you a spot on MTV or Radio, the Internet can easily turn you into a star if you have the chops. Just ask Justin Bieber.