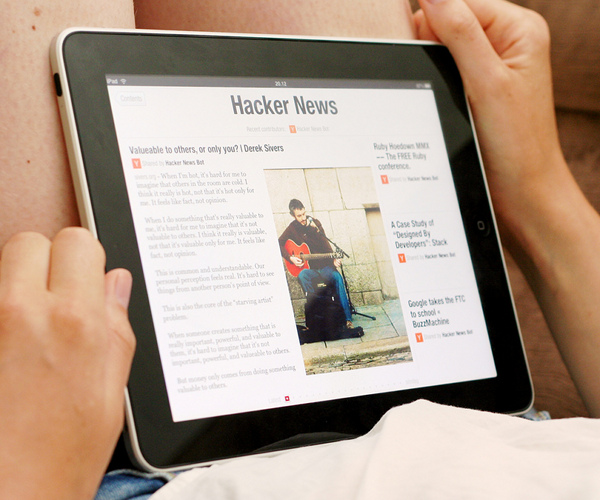 News is changing – quickly. The way it’s researched, the way it’s reported and the way we access it are all evolving rapidly. 2010 could well be remembered as a key year in the history of online news. Here are the key reasons why. When Steve Jobs unveiled the iPad in January, it kickstarted a year of rapid experimentation as news publishers hunted for a way to capitalise on this fresh take on tablet computing.

Many newspapers were quick to launch dedicated iPad apps, sometimes at prices higher than print subscriptions. There was evidence that publishers were charging much higher rates to advertise on tablet devices, too. In some cases, such as The Financial Times, the gamble seemed to pay off handsomely.

Meanwhile, Apple seemed a little more lenient in its taste and decency rules as it looked to accommodate major news publishers’ content in the app store. Some apps, including the UKs The Sun, were allowed to feature photos of topless women – usually a real no-no in the ultra-clean world of Apple.

The iPad was such a hit with news publishers that as the year drew towards its close, Rupert Murdoch was staffing up an iPad-only newspaper called The Daily to launch in early 2011. However, the idea drew criticism from some for its “Old Media” way of thinking. The Daily will reportedly update once per day like a paper newspaper, so don’t go expecting to get late breaking news for your expected 99 cents per issue.

In the magazine world, iPad editions ranged from little more than PDF versions of print magazines to interactive extravaganzas like the app from Wired. Towards the end of the year, Richard Branson launched an iPad-only magazine while independent publication TRVL points towards future success for independent publishers in the field. After years of offering open access to content, declining revenues forced some news publishers to act in 2010, with paywalls being the most popular option for monetising their online news.

The most high profile paywall launches of the year came from Rupert Murdoch’s News International in the UK. First The Times and Sunday Times, then The News of the World began to charge for access. At the same time, Murdoch waged a war against news aggregators like NewsNow and accused search engines like Google of “Taking stories for nothing”. Seemingly Murdoch doesn’t know how the Internet works.

Expect more paywalls in 2011. The New York Times website is expected to start charging for access to its content early in the new year. Let’s hope it’s a little more successful than fellow Big Apple publication Newsday, which revealed this year that it had sold just 35 subscriptions to its paywalled site in three months. Ouch. Wikileaks didn’t just provide news gatherers with near endless stories from its leaked documents and drama from the private life of founder Julian Assange, it demonstrated a change in the way journalism worked.

US media watcher Jay Rosen went so far as to call Wikileaks “The first stateless news organisation”. Why? It’s shown that documents don’t have to be leaked to a single journalist; they can be spread far and wide, potentially expanding their impact a thousandfold. While Wikileaks worked with traditional news outlets to identify headline grabbing stories from the mass of data it had in the US diplomatic cables and Iraq and Afghanistan war logs, anyone could do their own research and identify their own stories from the data.

While Wikileaks’ own future hangs in the balance at the end of 2010, Openleaks is a project that may take the idea to the next level in 2011. Created by defectors from Wikileaks, the service will be a platform that will allow anyone to securely send a leak to someone who will find it useful – not just to those in the media. This not only changes the future direction of news gathering, it potentially changes the way we communicate forever. Twitter continued to develop as both a place to make and break news during 2010. Every day of the year seemed to bring more stories sourced from tweets. While much of it was celebrity tittle-tattle, Twitter became an important outlet for official statements. Wikileaks’ account was one of the most famous examples, being the main daily mouthpiece of the organisation. Meanwhile, we saw more politicians join the service as the importance of tweeting became increasingly recognised.

As the year drew to a close, tweeting from the courtroom became an officially acceptable way of reporting on court proceedings in the UK. However, journalists tweeting their own opinions from their personal accounts faced trouble in some quarters. For example, a CNN reporter in the Middle East was fired for expressing her own feelings in a tweet.

Twitter itself launched a special guide to Twitter for the media this year and its founders stated that Twitter isn’t a social network but is instead for sharing news, content and information. All this helped lead us to conclude that Twitter is gearing itself up to become the defining media company of the new decade. “Hyperlocal” news sites expanded rapidly in 2010, both small-scale independent blogs and corporate networks like AOL’s Patch. Sitting somewhere in the middle, Neighborhoodr is a blog network built using Tumblr. Blogs are set up for sixty NYC neighborhoods and local residents can freely submit news stories from their area to be approved by a team of moderators.

Questions remain over whether hyperlocal news can work as a viable business. Reports of sweatshop-style 70-hour working weeks and entrepreneurial journalists struggling to make money mean that the future is far from certain for current approaches to the idea.

Experiments in online news in 2010 The great thing about online news is that it allows a ‘playground’ approach, with publishers and developers able to experiment with new ways of presenting the stories we consume.

The Guardian’s API bore some interesting fruit this year. Today’s Guardian is a website that re-imagines the newspaper’s stories in a “frictionless” format. Displaying a story at a time, it’s a refreshingly simple way of consuming online news. Your only decision on each page is “Should I read this or move on?”, with none of the distracting bells and whistles of a normal news website.

The idea of sharing news stories in real time as you read them was toyed with a couple of times during the year. UK startup Readness excited us with its “Last.fm for news” service but sadly it couldn’t get the funding it needed to continue. Another Guardian API project has developed the idea in a slightly different direction with The Social Guardian, which allows you to see what people you follow on Twitter are reading on the site in real time.

Read next: 4Chan goes down, "temporarily unavailable due to DDoS"