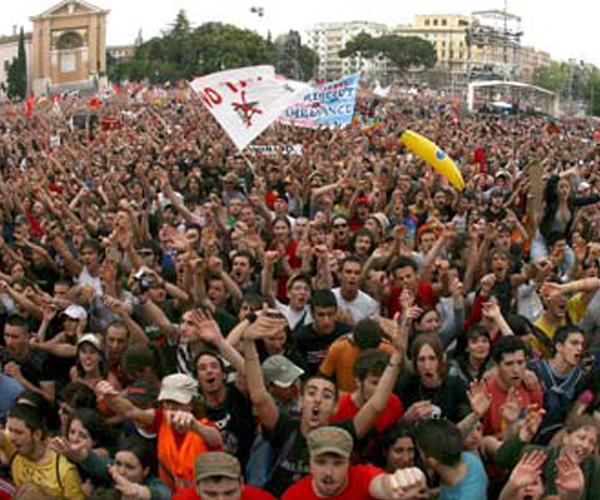 Mawaly.com is probably the largest legal online music service in the region providing both independent and signed artists’ music to it’s 1.2 million users from the Arab world, and their based in the Ukraine.

Mawal which is a popular form of Arabic singing often used in music to express agony and display the singer’s ability (or lack of) powerful and capable vocals. The ‘y’ in Mawal(y) adds the first person ‘my’ to the term making it translate to ‘My Mawal’.

If we were to present Mawaly to you in strict numbers it would sound something like this:
Mawaly successfully provides a selection of 2,691 Artist to choose from boasting a whopping 5,916 albums that contain 70,000 songs to a 1,278,023 fan base that’s growing by the day. But we won’t do it like that, cause there’s more to it than just numbers.

Their Beta labeled service is provides Music, Videos, Statistics and the ever so popular ‘Pop News’.

Foraoon the company behind Mawaly is an Arab development firm based out of the Ukraine that has provided some interesting services to the region such as Egyptian Facebook spin-off Banady.com, Iraqi classifieds service Mredy.com, and gaming platform elGame and many more.

So instead of a standard review of the service, we thought we’d head to Mawaly.com’s Ukranian (with Egyptian roots) founder Sherif Amin and ask him a couple of questions about Mawaly.com to understand how it works, and how these people make money.

TNW: What does Mawaly mean?
In Mawaly (موالي) we believe that everybody has the choice to listen to what he/she likes, so everyone has their own Mawal.
TNW: How much traffic does Mawaly.com get?

SA:  Mawaly.com gets 21 million plays per month from 5.5 millions visitors. We are hosting around 100 000 tracks but only 70 000 tracks are available online at the moment.

TNW: You provide a video service, how’s that going?
SA: Our video service now is on a developing stage. It will be in a new interface to be called Mawaly Video, a service are for artist’s promotions videos. At the moment all videos are from Youtube, 100 000 views per month.

TNW: When did it all start, and how has the development been coming along?
SA: Mawaly.com was launched in March 2007 with a simple interface, in September 2007 we updated the service interface and all contents were available to comment. Our current version was launched in August 2009. Continuously we are daily updating and adding more features, and we still in a developing stage. At the last version we changed the interface design, we went more socially by allowing users to create their own music profiles when they have their music libraries, play lists, friends and more. In the last version also any user can be a part of creating the music community by allowing them to add and edit photos and artists wikis and so on. We have also done a lot of work to provide music makers and our users by a detailed statistics concerning all music works and owners per week.

TNW: How much would does it cost to run a service like Mawaly? And what does the Rotana logo on your homepage mean?
SA: Mawaly.com is financed by Sherif Amin and its private group of owners, we run Mawaly.com with a fund of $360 000 per year, this finance is growing according to the service growth (Users, traffic, team) and developing new services.
Rotana is one of our music partners, so our relations are on art only.

TNW: How do you people make money, legally?
SA: Regarding legality, we have a warm relation with all music makers (labels and artists). They have the rights to make their music available for download or only streaming or both. For the music makers their real Yield comes from concerts, to be booked you must be famous enough, so music makers are using Mawaly.com to promote to their work online through our music community, they also use our platform to evaluate their work (albums, tracks) and to know how much is it popular.
Our business model is based on artist’s promotions and online advertising. We are working on offering paid services to our community users.

So there you have it, with some persistence, talent and about USD $360,000/year it appears there IS a legit online music industry in the region that isn’t run by record labels. We also found it impressive that a service like Mawaly is finally showcasing a new model to the region, in which a smart service with the right tools can give music lovers a voice, and make some money while they’re at it. Legally.