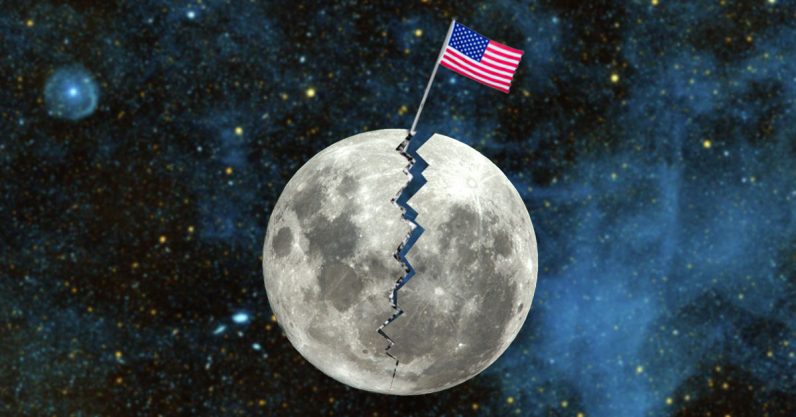 US Vice President Mike Pence yesterday gave a speech at NASA’s Langley research center in Virginia where he told employees that President Donald Trump was committed to putting humans back on the Moon by 2024 through “any means necessary.”

We’re not sure exactly what that means. It was likely intended to be an inspirational quip indicating that the employees of NASA have the President‘s full support. But it feels a bit ominous coming from the administration that had to be convinced that we should figure out how to safely get humans back to the Moon before we shoot them off towards Mars.

In order to succeed, we are going to continue to focus on the mission over the means. We want to challenge each one of you here at Langley: Consider every available option and platform to meet our goals, including industry, government — the entire American space enterprise.

That’s some damn fine space-race-rhetoric there, but to what end? There are plenty of reasons for the US to send humans back to the Moon. We stand to gain untold amounts of scientific knowledge from such missions and it’s imperative to the advancement of our functioning knowledge of the universe that we set up a permanent research base on the Moon.

But there’s absolutely no good reason to rush the project. What happens if we’re not so lucky this time around as we were in 1969? There weren’t any black box algorithms making grand-scale decisions when the Apollo missions were underway and they weren’t planning on setting up shop and mining the surface for resources.

We need to get back to the Moon, but we need to understand the impact we’re going to have once we’re there because, let’s face it: We fucked up the Earth. It might actually be fubar. Let’s not make the same mistake twice.

There’s a million ways that things could go wrong on the Moon, but luckily there isn’t an atmosphere for us to screw up on Luna. Unfortunately, we still have one here on Earth (albeit a brittle one) and if we break the Moon we’re even more screwed.

Scenario One: We break the Moon

Lets say we use all our scientific knowledge to pinpoint the perfect place to drill for chemical deposits that we can turn into drinking water, oxygen, and metal for building things and, whoops, we drill into the wrong place and literally “break” the Moon.

By break, I mean the Moon is still there… it’s just not very Moon-shaped anymore and has become significantly smaller in overall mass. If, for example, we super-nuked the Moon or drilled into a pocket of explosive Moon gas (hey, anything’s possible), it would probably explode into a bunch of giant Moon chunks. But those chunks would probably smash back together and form a sort of copy of the original Moon.

Keeping this in mind, it’d be hard to accidentally break the Moon because even a barrage of coordinated explosions across it’s entire surface would just crack it at best. But, if we imagine that there’s things our scientists don’t know, and posit the possibility that a bunch of astronauts in a hurry might not have all the information they need to start building things on the Moon, it becomes clear that we should at least consider that we could end up with a mutant Moon wobbling around in our night sky.

Poof, the Moon is gone. If we manage to set off some horrific chain events by which lunar subsurface explosions resulted in a perpetuated chemical reaction and… well, the point is nobody knows how this would happen because we haven’t taken the time to research the impact humans will have once they start building on the Moon. So let’s assume the worst and say we’ll find a way to completely destroy the Moon like rock stars in a hotel room.

In both scenarios the Earth will get a rain of fire and brimstone from the sky straight out of the pages of the Christian Bible. With what little luck our species has left, we might just get a really pretty show as trillions of tiny pieces of our vanquished Moon burn up in atmosphere.

But, chances are, there’ll be larger chunks that superheat as they scream through the atmosphere before slamming into the surface below. The damage could be apocalyptic. And if we don’t all die immediately, there’s little chance we’ll survive as a civilization for much longer.

If the Moon‘s just broken, the Earth could be knocked off its axis by up to 45 degrees. If it’s blown up entirely: we’re talking up to 90 degrees. That means entire swaths of the planet would exist in perpetual darkness. Earthquakes, tsunamis, tidal waves, hurricanes, tornadoes, and floods would completely eradicate most life on the planet and transform Earth’s surface into something unrecognizable.

And if any of us somehow managed to survive all of that, perhaps by huddling in a tiny corner of sunlit Earth, we still have to contend with the fact that any moment could be our last because Luna wasn’t just our Moon: it was our guardian shield against rogue asteroids. How do you think it got all those craters?

On the bright side, if we totally obliterate the Moon, we’ll probably get a really cool halo around the Earth to stare at as we all die. This would occur as some debris gets caught in the Earth‘s gravity outside of its atmosphere. This gorgeous debris field would probably send showers of moon rock towards the Earth’s surface as a constant, global meteor shower.

No matter how you look at it, sending humans to the Moon is important. But does it have to be done with the kind of urgency that has the Vice President of the United States personally directing NASA employees to achieve the 2024 goal “by any means necessary?”

There’s a lot on the line, and our record as a species is 0-1 when it comes to taking care of the places we’ve occupied. Pence’s insistence that we prioritize the “mission over the means” is irresponsible. That kind of thinking is what caused the Earth‘s current climate crisis.

Read next: Apple reportedly 'considering' allowing you to set your own default apps