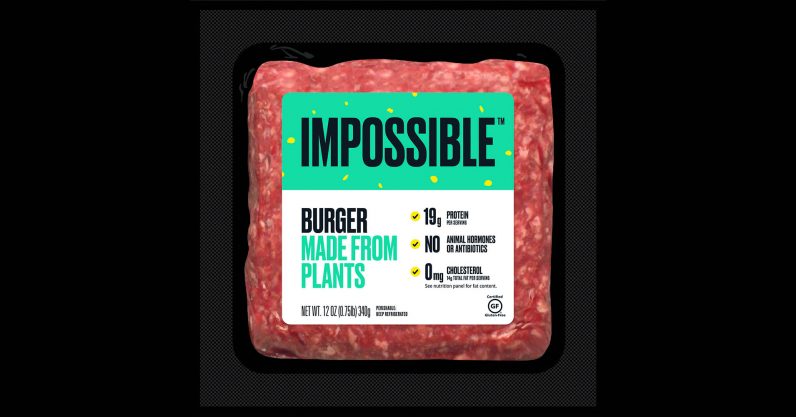 The Impossible Burger, a burger made from plants that comes eerily close to the real thing, is finally landing in stores. Until now, it’s been exclusive to select restaurants, but starting tomorrow, it will pop up in 27 Gelson’s Markets in California. It’ll show up on the east coast later this month, and the company plans to make it available in further regions throughout the country by early 2020.

Impossible Foods has made a big mark on bringing plant-based meat alternatives to a wider audience, with a burger that’s convincing enough to trick some hardcore meat-eaters. The key ingredient to its formula is something called heme, which is a crucial part of why meat tastes like meat (it exists in plants too, but more so in animals). The heme in the Impossible Burger is made through genetically engineered yeast, but the final compound is identical to the one in meat.

The Impossible burger has become so popular that even Burger King now carries the it at its locations nationwide, making it perhaps the only plant-based meat substitute readily available at a nationwide food chain.

While I wasn’t a huge fan of the first version of the burger, version 2.0 introduced earlier this year was revelatory. For all practical purposes, it tastes like a burger. Sure, people who are really picky about their meat will be able to spot the differences. I can tell it’s not the real thing when I’m paying attention, but the point is that it’s close enough and the differences are more ‘different’ than ‘worse’. I reckon the difference between the regular Whopper and Impossible Whopper is smaller than the difference between different types of hamburger beef.


Note that I’ve said ‘plant-based’ and not ‘vegan’ so far. It’s the term Impossible Foods uses, and in the colloquial sense, it’s vegan. There’s no dairy, eggs, or other animal-sourced product in the burger. However, Impossible Foods tested the heme ingredient on nearly 200 rats which died in the process, in a study that was not required to get its food on the market.

Impossible Foods’ CEO provided an explanation here, suggesting that the study was made in order to secure FDA approval and wider distribution. The company “designed the study rigorously so that it would never have to be done again.”

Basically, it made a choice for the greater good. I suspect most vegans can understand that, but it’s something to be aware of depending on your take on food ethics. Still, the major benefit is not so much convincing people to go vegan as letting meat-lovers to at least consider reducing their meat consumption. People don’t eat meat because they like the idea of animals dying (hopefully). They eat it because it tastes good. Give them an alternative that tastes just as good, and we make things better. Animal ethics aside, scientists have told us time and time again that eating less meat is one of the best choices we can make to help the environment.

It’s a good time to be a vegan and vegetarian in the states. There are more choices than ever before, and signs suggest options are only increasing.

Read next: Here's what we like about iOS 13 (and one thing we don't)