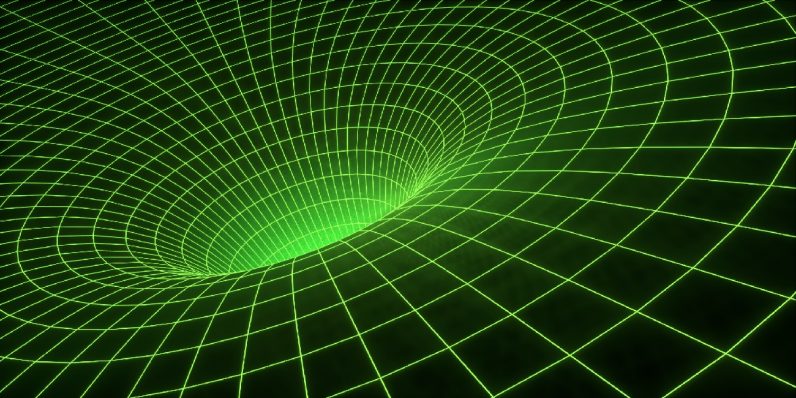 Wolfram’s a household name in the science community. He’s responsible for Wolfram Alpha, the search engine that AskJeeves wished it was, and the creation of a math-based programming language called Wolfram Language used to power the popular Mathematica system and, now, the creation of the Wolfram Physics Project. His contributions go back to his formative years where, by age 14, he’d written three books on the subject of physics.

It’s important to understand that Wolfram’s considered a respected scientific mind because his new theory, which is represented as simply “A Class of Models with the Potential to Represent Fundamental Physics,” come straight out of left field with a pretty wacky approach.

Read: Our universe may be part of a giant quantum computer

Now, of course, “wacky” is a relevant term when it comes to physics. Wofram’s attempting to do what Einstein and Stephen Hawking have tried before him: create an explanation for the universe that makes sense. To this end, physicists and other scientists have come up with theories that range from multiple worlds (as in, more than one universe) to “we’re all living in a computer simulation” (which just begs the question, what’s the universe that the computer is in made of?). So calling a physics theory “wacky” implies an entirely different level of weirdness.

I never expected this: finally we may have a path to the fundamental theory of physics…and it's beautifulhttps://t.co/1zNCYDMxhM pic.twitter.com/IVvx8F97SQ

Let’s start at the beginning. According to a blog post from Wolfram, he had a sort-of “eureka” moment a few months back that gave him insight into the inner workings of the universe. The post begins with the ominous phrase “I never expected this.”

Then Wolfram’s fervor immediately paints the picture of a scientist in semi-“mad” mode:

It’s unexpected, surprising—and for me incredibly exciting. To be fair, at some level I’ve been working towards this for nearly 50 years. But it’s just in the last few months that it’s finally come together. And it’s much more wonderful, and beautiful, than I’d ever imagined.

In many ways it’s the ultimate question in natural science: How does our universe work? Is there a fundamental theory? An incredible amount has been figured out about physics over the past few hundred years. But even with everything that’s been done—and it’s very impressive—we still, after all this time, don’t have a truly fundamental theory of physics.

This all adds up. We do have quantum mechanics, but despite being a very, very successful theory it doesn’t quite explain everything. Then there’s string theory, which has taken a bit of a beating in recent years. So yeah, maybe we do need a new kind of physics.

What makes Wolfram‘s theory different is that, well, it’s not really a theory. It’s more like the frame-work of a theory. It seems like he’s just saying the universe is made of a 3D mesh with enough point-to-point lines added in to create a physical topography. In other words, it feels like Wolfram‘s proposing that the universe works exactly like a 3D computer model.

This seems like just the kind of thing someone who specializes in creating computer languages would say. Much like how Einstein and Hawking, scientists who specialized in nuclear and astrophysics, decided that gravity and black holes were the key to understanding the universe’s true nature.

Folks. I do not live under a rock. Have I heard of Stephen Wolfram's physics project? How could I not given that his PR people rammed it down my inbox. Why do I not comment on it? I looked at it and don't think it's interesting, that's why. Now please move on.

Yes, I agree. It's an interesting phenomenon that people today think the universe works like a computer like they once thought it works like a clockwork.

Wolfram describes the basics of his new concept as thus:

In the early 1980s, when I started studying the computational universe of simple programs, I made what was for me a very surprising and important discovery: that even when the underlying rules for a system are extremely simple, the behavior of the system as a whole can be essentially arbitrarily rich and complex.

What he then proposes is that everything in the universe can be explained by imagining it all as a series of interconnected points. He explains the topography and physical structure of the universe as a series of unfolding events that follow precise mathematical rules. This seemingly allows Wolfram to explain the concept of “time,” which Einstein side-steps by combining it with space, as a sort of backdoor math modifier to rationalize expansion.

So what then is time? In effect it’s much as we experience it: the inexorable process of things happening and leading to other things. But in our models it’s something much more precise: it’s the progressive application of rules, that continually modify the abstract structure that defines the contents of the universe.

Wolfram‘s offering a set of math-based rules that he believes could eventually become the foundation for a unified theory of everything. But there’s a catch: he’s asking for the science community at large to help him prove it. Like many big theories – especially those that come along to challenge quantum mechanics or string-theory – this one has all the answers, but it hasn’t worked out which questions make them relevant quite yet.

Perhaps the biggest criticism of Wolfram‘s work is that it’s a bit dense. The technical explanation alone weighs in at over 400 pages. It’s going to take a few months for all of his ideas to see peer-review. That makes it a bit odd that he’s already publishing a book, running a project website, and soliciting partnerships to move the work forward. What’s the rush? The universe will still need explaining after everyone’s had a glance at the paper.

At the end of the day, one has to wonder how much chance a unified theory of the universe that cribs from both the arcade gaming era and Nick Bostrom’s simulation hypothesis has against M-theory, relativity, or other long-standing remedies.

Still, a rising tide lifts all vessels and Wolfram‘s current passion is bound to yield some interesting mathematical results.

Are you a physicist or physics enthusiast? Let me know what you think about Wolfram‘s new project on Twitter @mrgreene1977.