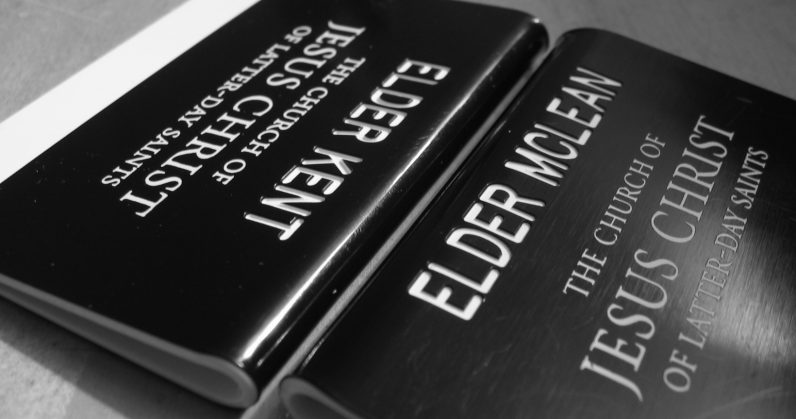 Temple Square sits at the heart of Salt Lake City’s downtown. The ten-acre complex is the closest thing to the Vatican City for the Latter-Day Saint (LDS) faith. Within its lush surroundings, it houses the world’s most prominent Mormon temple. Visitors are welcome to visit the grounds, and as you walk through the immaculately groomed facility, you’ll inevitably catch the eye of a young missionary.

Mormonism is a famously proselytizing faith. A common rite of passage for young Mormon men (and women, albeit to a lesser extent) is to embark upon a mission, where they dedicate as much as two years of their life to spread their faith, often thousands of miles from home. But what happens when their mission ends and they return to secular life?

In many cases, they’re finding success in Utah’s burgeoning technology sector, either working on the front-line of sales or software development, or even founding innovative companies themselves. Indeed, one could even make a compelling case that returned LDS missionaries are the “secret sauce” behind the frenetic growth of the Silicon Slopes scene.

“Silicon Slopes” refers to two things; the first is a geographical area that encompasses Salt Lake City and many of the surrounding towns, including Lehi, Provo, and Orem. The second is a 501(c) non-profit organization that advocates for technology companies in this area.

Outside of the state, Utah isn’t especially well-known for its startup scene. It’s undeniably overshadowed by San Francisco and New York, both of which house most of America’s leading technology companies. These two cities attract the lion’s share of venture capital money, and therefore command most of the media attention.

Despite that relative obscurity, Utah has produced some astounding success stories. The most well-known is arguably the Farmington-based Pluralsight, which runs a training platform designed for technology professionals. Last year it went public, raising $310.5 million and cementing the company’s rightful place in “unicorn” territory.

Beyond Pluralsight, there’s at least three other unicorn-level technology companies operating within the state of Utah. The customer experience firm Qualtrics, for example, was acquired by SAP in 2018 for a cool $8 billion. Another startup, Domo, creates cloud analytics software and was valued at $2 billion when it went public last year. InsideSales is also believed to be worth over a billion dollars, although the precise figure isn’t exactly known.

But if you really want to measure the success of Utah’s startup scene, you don’t need to read TechCrunch or The Wall Street Journal. You just need to fly to Salt Lake City and look out of your window as the plane makes its descent. The picturesque mountains that surround the state’s capital are quite pockmarked with massive, high-tech office buildings that house an army of developers and assorted technologists. And a great many of these workers are returned missionaries.

It’s entirely possible you’ve encountered a Mormon missionary before. They might have stopped you in the street or knocked on your door. Perhaps you’ve even invited one into your home to perform a bible reading, or so you can ask more probing questions about the faith. But most of us don’t actually know what the day-to-day life of a smartly dressed Mormon missionary is like.

Suffice to say, it’s a remarkable departure from everyday life. As one missionary I spoke to in Temple Square explained, it’s a life of discipline and ascetism, where choices are made on your behalf by other senior officials in the church. When you put on your suit and name badge, you effectively relinquish your free will.

Missionaries get no choice of where they serve, nor who they serve with. They are always supposed to remain within reach of their companions, except for when using the shower or restroom. Privacy simply isn’t a thing.

Six days a week, LDS missionaries perform their duties. On their sole day off, they’re allowed to email or write (and, as of February this year, call) home. They are commanded to refrain from secular entertainment. They avoid popular music, instead listening to hymns or EFYs (which stands for “especially for youth,” and is a subgenre of contemporary music that’s firmly rooted in Mormon theology).

And crucially, missionaries need an unbelievably thick skin. They routinely deal with rejection. Sometimes this is manifested in a polite “no.” Sometimes it isn’t. Faith, after all, is perhaps the most personal thing there is.

Heading to the slopes

After a young Mormon concludes their mission, they began their return into secular life. Having discharged their solemn duties to their church and their God, they’re able to pursue more worldly goals, like family, education, and a career.

And inevitably, many find their way into local technology companies, where they become a valuable resource. As Pluralsight CEO Aaron Skonnard explained, much of this value derives from the experiences and skills gained during missions.

“I do think there’s something transformative about that experience that produces leadership qualities, selling skills, and high EQ [emotional quotient],” he told me.

“It’s an incubator for those skills, because you’ve got to live with people you’ve never met before. You’re assigned a companion who you’re with 24/7 until you get changed. And you’re constantly being rotated between different companions – which you have no choice or input into. And then you go out and sell the hardest thing it is to sell, which is religion.”

Religion isn’t just deeply personal. To the faithful, it’s the fundamental basis of how they understand the world. Scripture provides a rulebook for life, and addresses the questions of “where did I come from” and “where will I go?” As Skonnard points out, talking about this with absolute strangers requires a level of emotional intelligence.

“Being a missionary requires a deep ability to relate with people. To understand what their motivations are, where they are in their lives, and why they’d consider making a change of something as big as their religion. In that whole process you make those whole EQ sills, and learn how to ‘close the deal’,” Skonnard said.

This is arguably why Utah’s economy (and not merely the technology sector) is heavily dominated by sales companies. This culture, plus a cheap and youthful labor pool, has attracted large blue-chip companies like Home Depot and Esurance to open call centers within the state.

Utah is also the birthplace of countless multi-level marketing (MLM) companies, the top nine of which collectively earned $7.6 billion in revenue during 2017 alone. This proliferation of questionable network marketing schemes has resulted in a cruel joke that states the acronym “MLM” actually stands for “Mormons losing money.”

And then there’s the language factor. Although the LDS faith originated in the United States, it’s since spread globally, with missionaries working across the world. One missionary told me about a friend who was transplanted from Australia to Hong Kong, and therefore had to learn Cantonese. Another former missionary, 2012 presidential candidate Mitt Romney, speaks fluent French thanks to his time in Paris.

Missionaries carry these language skills into later life, making them even more valuable to Utah’s technology companies, which are increasingly outward looking.

Of course, Utah’s recent technological success is the product of several factors, with the prevalence of former missionaries being just one. It benefits from several highly regarded universities, all with excellent Computer Science programs that pump out talented (and often entrepreneurial) developers.

There’s also an important cultural factor. Utah’s companies are more conservative than their Californian counterparts. VC capital is comparatively harder to obtain than in Silicon Valley, so companies must achieve profitability early. This creates companies that are ultimately more sustainable, and based on long-term aspirations.

And maybe it’s Utah itself.

I spoke to Clint Betts, co-founder of the Silicon Slopes advocacy group, who argues that the success of the local startup scene is largely because Utah is a good place to live.

Salt Lake City has a low cost of living. It’s clean and safe. The schools are good. It’s got a reliable and affordable public transport system. If you want to start a family, you can easily afford to buy or rent a house. People are friendly. The city is surrounded by gorgeous, rugged countryside.

These factors keep talent within the state, while also attracting skilled developers and entrepreneurs from other major cities.

Silicon Slopes might not be on everyone’s tongue, but with San Francisco’s housing crisis showing no sign of abating, I wouldn’t be surprised to see Utah’s relevance increase in the coming years.