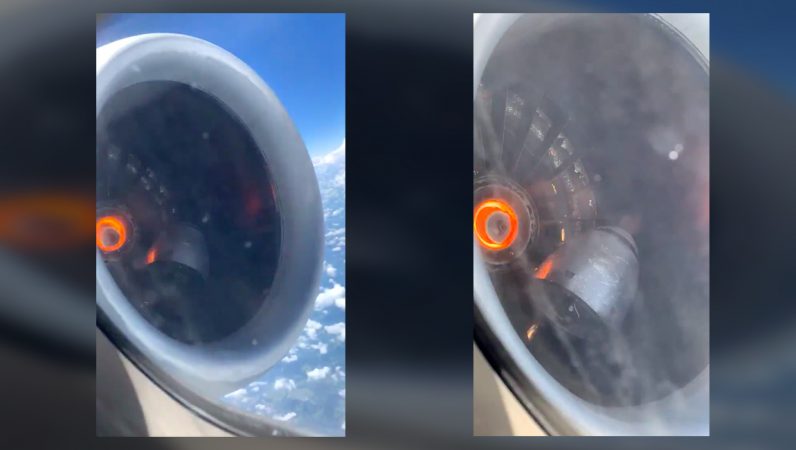 In a terrifying incident on Monday, a Delta airplane was forced to make an emergency landing after one of its engines malfunctioned mid-flight. The crew was able to safely land the plane with its 148 passengers, all of whom made it home without a scratch. Now all that’s left is a gnarly video of the faulty engine.

The footage, shared on Twitter by a passenger by the name of Logan Webb, shows the plane’s spinner bouncing around the shaft of the engine. Deeper inside the turbine, you can notice a fiery orange glow – perhaps from the heat generated by the spinning.

Here is the clip:

Video I took from my seat on my flight from Atlanta to Baltimore yesterday! Thanks @Delta for the silly smooth emergency landing! #perfect #execution To use this video in a commercial player or in broadcasts, please email [email protected] pic.twitter.com/TUFzREl0Lc

“The flight crew of Delta flight 1425 from Atlanta to Baltimore elected to divert to Raleigh, NC after receiving an indication of an issue with one of the aircraft’s engines,” a Delta spokesperson told TNW. “The flight landed without incident and customers were reaccommodated on an alternate aircraft.”

The video has since gone viral, attracting chatter from tons of spooked out commenters and – more notably – a small number of aircraft professionals, who took to Reddit to share more background on engine failures and emergency landing protocols.

Here are some of the most noteworthy tidbits from Reddit’s airline personnel.

“Although less than ideal, all commercial jets will fly fine on one engine,” said Redditor WearyMatter who claims to be an airline pilot. “If you are higher up, you will need to descend, as one engine likely won’t allow you to maintain cruise altitude. You would probably get down near 10,000 ft [about 3,000 meters].”

The Redditor further noted that although such malfunctions are rare, pilots routinely drill landing damaged aircrafts in simulations. Indeed, some of these simulations focus on even more dangerous situations, including scenarios in which both engines break down.

“Engine failures are very very [sic] rare but we practice them every year in the simulator,” the Redditor continued. “We actually practice a dual engine failure in the [simulator] as well.”

“You start at 35,000 feet [over 10,000 meters], they cut both engines, pick a piece of pavement, glide for 10 plus [sic] minutes, and hope you averaged everything out right and you make the runway,” the self-identified pilot added. “You are also running checklists trying to get the engines back going. (They never come back in the [simulator]).”

“It’s kind of fun to do in the simulator,” the Redditor said. “Not so much in real life.” WearyMatter also congratulated the pilots for keeping their cool, commending them for their “outstanding job” landing the plane.

In the meanwhile, Delta has said the engine has already been replaced and sent back to the airline’s maintenance team for further inspection. The affected plane is expected to be back in transit on Wednesday afternoon.

Hopefully, its next voyage goes smoother.

Read next: Google contractors are secretly listening to your Assistant recordings