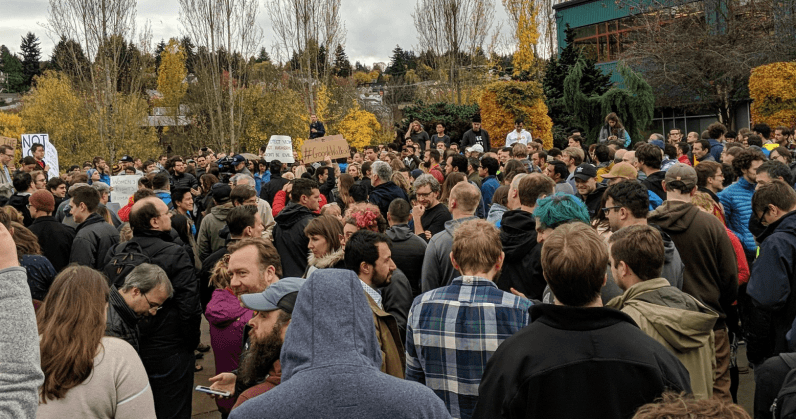 Two of the women who helped organize last year’s global Google Walkout have accused the tech giant of retaliating against them, reports Wired.

Last November, more than 20,000 Google employees around the world took part in a mass walkout to protest the company’s handling of sexual harassment allegations against senior executives at the company.

Dubbed Google Walkout, the coordinated event was in response to a report by The New York Times that found two top executives to have been paid millions of dollars in exit packages despite having been accused of sexual misconduct.

According to an internal memo, the march drew support from CEO Sundar Pichai who issued a mandate to ensure that employees have the “support” they need. But two women, Meredith Whittaker and Claire Stapleton, who spearheaded the movement say they have faced blowback from the company for their actions in the intervening months.

In a letter shared internally with co-workers, and obtained by Wired, Ms. Stapleton, who is a marketing manager at YouTube and has been with the company for the past 12 years, wrote that two months after the walkout, she was demoted, lost half of the people who reported to her, and was “told to go on medical leave, even though I’m not sick”.

Only after she hired a lawyer did Google conduct an investigation and reversed its decision to demote her. “While my work has been restored, the environment remains hostile and I consider quitting nearly every day,” she wrote.

Whittaker, who heads Google’s Open Research Group and also co-founded the AI Now research institute at New York University to help understand the social implications of artificial intelligence, wrote that, in order to stay at the company, she was told she would have to “abandon my work on AI ethics and the AI Now Institute.”

While the walkout resulted in Google ending its practice of forced arbitration for claims related to sexual harassment at workplace, the letter goes on to say that more than 300 employees have faced retaliation since then, suggesting these are more than isolated incidents.

“Google has a culture of retaliation, which too often works to silence women, people of color, and gender minorities,” they wrote, adding, “Retaliation isn’t always obvious. It’s often confusing and drawn out, consisting of icy conversations, gaslighting, project cancellations, transition rejections, or demotions.”

Google, however, has responded stating it had already investigated the cases and found there was no retaliation.

“We prohibit retaliation in the workplace, and investigate all allegations,” a Google spokesperson said in a statement to Wired. “Employees and teams are regularly and commonly given new assignments, or reorganized, to keep pace with evolving business needs. There has been no retaliation here.”

Stapleton and Whittaker also wrote in their email they’ll be hosting a “retaliation town hall” on April 26 to “share our stories, and strategize.”

A week after the walkout, Pichai wrote that Google would “double down on our commitment to be a representative, equitable, and respectful workplace.” But by pushing back against employees who speak out, its actions paint a different picture and does nothing to help its cause.