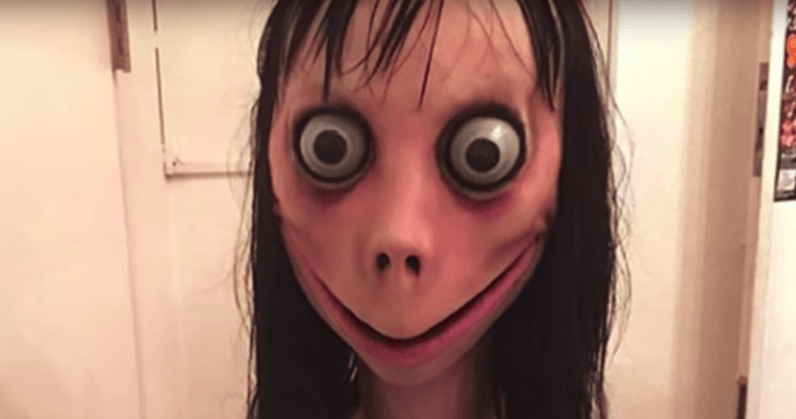 It starts with a single message. Hours later, if at all, the WhatsApp, Messenger, or YouTube account gets a disturbing reply, typically including violent imagery. And then the instructions start. They often start as a form of compliance testing before moving on to more disturbing instructions involving self-harm and, ultimately suicide.

It’s called “The Momo Challenge,” and it’s a hoax.

Debunked for the first time in 2018, the Momo Challenge is again making the rounds, mostly on local news affiliates. The story hopped between smaller affiliate networks on Wednesday, mostly warning of the dangers posed to children. By the end of the day, the swell of news stories had become a tsunami after Kim Kardashian-West shared a message about the dangers of Momo to her 129 million followers.

It was a good-natured attempt, one that involved leveraging a massive social following into forcing action from YouTube in removing the accounts.

YouTube responded by noting that these types of videos would be removed in accordance with its terms of service, although it hadn’t seen a single example of them on the platform. Just today, YouTube doubled down on the sentiment, stating it would no longer allow monetization on videos featuring Momo — the same videos that don’t exist, according to its previous statement.

Representatives from YouTube could not be reached to clarify the statement.

For YouTube, Momo is little more than an internet hoax, news cycle fodder spun by clueless pundits insistent on driving cheap clicks with sensationalist headlines. For the rest of the tech press, this is equally true. Momo isn’t a topic of great consideration in these types of newsrooms, as it wasn’t a real story in 2018, and it still isn’t today. There has been zero corroborated evidence of any child ever taking his or her own life after taking part in the challenge.

Momo was the creation of a Japanese artist Keisuke Aisawa in 2016. The real title of the work is “Mother Bird,” and it’s unclear how it came to be associated with the name Momo, or the Latin American social media accounts perpetrating the hoax.

It’s been a predictable trope in recent years that nonsensical stories would turn into sensationalist headlines about the epidemic of kids falling ill after eating Tide Pods, dying while snorting condoms on YouTube, or asphyxiating on spoonfuls of cinnamon. For media, it’s the shock and awe reaction that drives its predictable response to barely-there trends — which sometimes become self-fulfilling prophecy later.

The Tide Pod challenge, for example, led to zero deaths, and fewer than 50 reported harmful exposures by 13- to 19-year-olds, according to the American Association of Poison Control Centers.

On YouTube, the bulk of Momo videos are those explaining the hoax itself — videos that should remain monetized. Those deserving of de-monetization are videos that purport to show conversations between the creators and Momo, videos that are largely fictional representations.

The true danger of Momo videos is that of unethical creators willing to spin the hype wheel and further the hoax in an effort to monetize these videos. YouTube, though, seems to be about as concerned with the spread of misinformation pertaining to Momo as it is about flat-earth theories, 9/11 hoaxes, and misrepresenting dead children from Sandy Hook Elementary. It took Kim Kardashian, after all, to force the platform to take action on Momo — a debunked hoax.

If you’re looking for an internet challenge to be afraid of, this isn’t it. Media should instead look to The Blue Whale Challenge. Unlike Momo, this challenge has been linked to 150 suicides since its inception, mostly by Russian teens.

The challenge gets its name from blue whales, who are known to beach themselves in an apparent effort to end their own life. It takes place over 50 days and in order to play users must join an online community sometimes referred to as the “Sea of Whales.” Once there, you’ll be locked into an agreement with an administrator who guides you through the game. Players must complete a task each day, with the final task being to end their own life.

In February of 2017, two girls teenage girls, 15 and 16, held hands and walked off the top of a 14-story building in Siberia. The pair left messages on their social network accounts on day 50 saying “end,” perhaps to signify they had reached the end of the game. They were just two of more than 130 separate cases of suicide in Russia linked to the “game.”

YouTube still plays host to numerous Blue Whale Challenge videos, complete with ads to signify that they are being monetized. There’s also little in the way of concern from the same frantic luddite’s on the local news who embarked on a mission to freak out parents in exchange for views. And while tragic, Blue Whale Challenge suicides reflect an infinitesimally small percentage of teen internet users. Is it worth a conversation with your kids about mental health, and the dark corners of the internet? Absolutely. Is it worthy of prime time headlines and fear-mongering? Of course not. Though you could certainly make the argument that video creators shouldn’t be profiting from uploading these types of videos: Paging Kim Kardashian…

For parents, it’s the internet’s conventional wisdom that still holds true. The web is a wonderful place, but it also happens to contain some of the darkest themes of the human condition. It’s not where you’d send your kids for an unsupervised playdate. It certainly isn’t a place where teens should be given unfettered access. Momo, in this case, tells us more about the state of parenting in the digital age than it does about the internet’s darkest corners.

It begs the question whether it’s really the internet that parents fear, or their children if they start limiting access to it.

Read next: What TikTok’s Chinese predecessor can reveal about its future