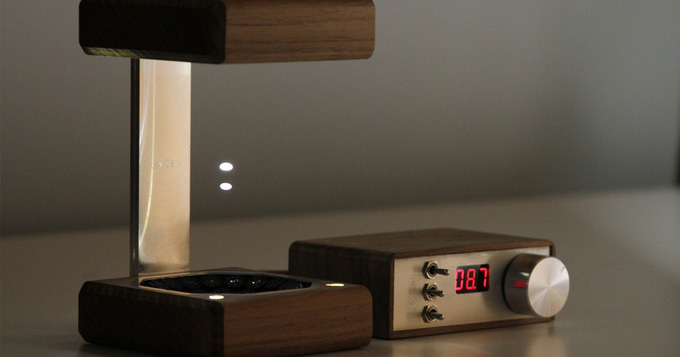 Kickstarter is always a mixed bag. On the one hand, there are some of the most innovative products on Earth, all in one place. But on the other, we’ve got gadgets for taking better dog selfies, Nike-like trainers for horses, and this odd brush that makes it more fun to lick your cat.

But if you can get past the oddball items, some of which are, presumably, genuinely useful, there are real gems to be found. We just hope they actually deliver, unlike the Coolest Cooler, which we’re still waiting on. Sigh.

Wakē solves a problem anyone that shares a bed will instantly relate to: alarm clocks suck. When the morning alarm goes off, it’ll inevitably wake your partner too, there’s just no getting around it.

Wakē, though, solves the problem by mounting a light to your headboard that uses infrared temperature tracking to determine where you are in the bed, and then rotate toward the person who needs to wake up. Once it finds them, it directs a burst of light at their face to aid in awakening the user. Better, there’s a set of parametric speakers that be beams sound directly at one person, resulting in an audible tone only they can hear.

While we’re in bed, let’s stay there for a minute and explore a product that seems like it hasn’t been updated in decades: the pillow.

Podoon created a pillow that automatically adjusts its height as you move around tonight, expanding and contracting as you move from your stomach, to your side, and your back. In doing so, your head is always at the perfect height, ensuring your spine is properly aligned.

LeviZen is one of those things that we absolutely don’t need. But that doesn’t keep us from wanting it.

The super minimal desk accessory is crafted out of a luxurious-looking walnut wood, and brings a zero gravity experience to your workspace. Not for you, of course, but for water. LeviZen is a liquid levitator that suspends water droplets between to surfaces using inaudible frequency sound waves. And, it’s impossible not to want one.

Rhino’s Arc II is a robotic camera assistant that features full joystick (or automated) motion control, including 4-axis rotation, and slider functionality. It’s the perfect tool for interviews, time-lapse photography, and shooting much-needed b-roll without a bunch of pricy accessories.

For tight spaces, you can even use the Arc II with your iOS device rather than the larger joysticks.

Silo is a one-touch connected food storage system that claims to keep food fresher up to five times longer. At its core Silo is a simple vacuum-sealing food system that uses one-touch to remove the air from any of its included containers.

While it’s 2018, and vacuum storage isn’t exactly revolutionary, what sets Silo apart is the degree at which its connected (Alexa included), and in using something more akin to a Tupperware container rather than throwaway plastic bags — which also don’t stack very well in your fridge.

I tried my best not to include the most badass water gun in the history of water guns, but I just couldn’t do it — journalistic ethics and all that.

Spyra is an auto-refilling water gun that doesn’t rely on the pump-n-spray methods of water guns past. Instead, you just dip it in water, wait about 14 seconds for a complete fill-up, and start pestering your friends and loved ones with a 30ml (about the size of a shot glass) spray of water. Rather than the large streams of water sent out by the Super Soaker, for example, this is a single, controlled blast more akin to a bullet than a spray.

Oh, and it can pepper your nemesis with a quick blast from about 7.5 meters (24 feet), without a loss of accuracy.

This is another cool desktop accessory. The Universe Sphere packs more than 200,000 stars into an 8cm glass orb, forming a replica Milky Way on top of your workspace.

The Universe Sphere’s creators packed a ton of research into the tiny orb, including researching early European Space Agency (ESA) measurements for proper scale, and consulting with a professor of astrophysics in Rotterdam, Holland.

While it’s cool as-is, you can even customize the base and the colors inside by consulting the website, here.

According to the product page, the first mask was introduced more than 9,000 years ago and used to disguise or reveal a personality trait. This mask wants to the opposite, and enhance the artistic qualities of each and every person who wears one.

The masks are wearable, foldable, and fully adjustable. Each uses a sound sensitive lithium modulator to control a layer of phosphorous ink that continually changes to create some really cool effects.

Winner of a CES 2019 innovation award, the FT Aviator Drone Flight Controller is the answer to the lack of precision and control offered by most drone controllers. It was designed by an astronaut, and based on the flight joystick inside hobby and commercial aircraft, bringing the joy of flying one-handed to anyone with a drone.

Designed to be fully compatible with nearly all DJI drones, the flight controller works natively with DJI radio, and the Fluidity app for Android and iOS.

Last, but not least, we have one of my favorite Kickstarter campaigns of 2018.

Pivo is like an interactive smart assistant for smartphone photographers and videographers. Each system comes with a rotating base that holds your smartphone and pans to keep you in the frame. Whereas selfie sticks and gymbals require the user to operate the camera (or hold the selfie stick) with one hand, Pivo offers a better way to film yourself by allowing the rotating base to follow you when you move out of frame. It’s like having a camera man with you at all times.

Read next: End of year crypto roundup: How did NEO perform in 2018?