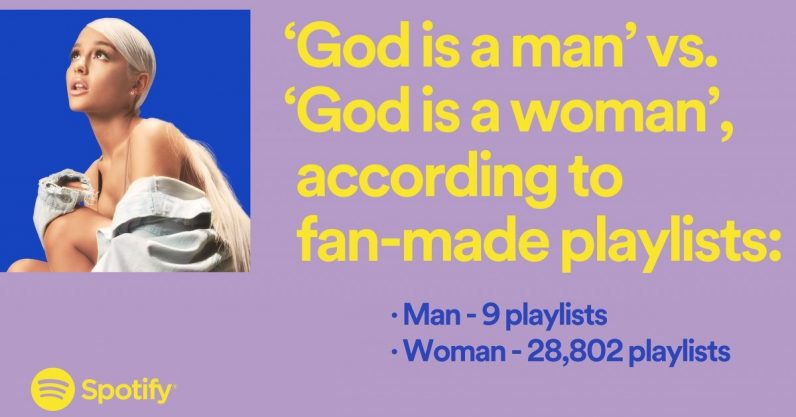 Spotify started rolling out its Wrapped year-end billboards, where it blasts out trivia about its users and occasionally calls out the stranger ones. Most of the facts are hilarious, though it does remain a bit creepy just how much the company is willing to reveal.

spotify used their data to create some very weird holiday ads and they're incredible pic.twitter.com/NfoCDov7OC

This will be the company‘s third year doing the Wrapped campaign, and it gets weirder and funnier each year. The most relatable one, for me, reads, “The fan-made ‘I don’t give a s*** what the calendar says, it’s christmas’ playlist is about to be correct for the first time in 2018.”

In fact, several of the ads center around playlists and podcasts. Another reads “My Favorite Murder was the favorite podcast of 327,676 people on Spotify this year. Careful, one of them might be behind you.” And the one that made me laugh the hardest? “22 fan-made Engagement Party playlists featured Florida Georgia Line’s ‘Talk You Out of It.’ Umm…”

In total, the Wrapped billboards will appear in 12 countries and feature up to 50 artists, including Ariana Grande and Post Malone. As always, the ads will show local favorites in whatever region they’re put up. Spotify’s global creative director, Alex Bodman, told Wired:

In previous years we were building up the campaign. This year, we’re treating it less like a campaign and more almost like an editorial platform, for us to come out with our totally distinctive voice and let people have a moment of celebration, laughter, and levity at the end of a long year.

I’m sure, to a certain extent, users wouldn’t be thrilled to know how much Spotify knows about them. Remember last December, when Netflix users were creeped by the company tweeting the number of users who watched a specific Christmas special every day for over two weeks? So I’m sure there’s someone waiting in the wings to accuse Spotify of the same thing.

Like 💚 to get a reminder for your #2018Wrapped from @Spotify on December 6th. pic.twitter.com/3hANiMIWrM

The rest of the Wrapped event, in which users receive personal stats about the music they’ve listened to, will begin on December 6.

Read next: DJI's Osmo Pocket is a tiny gimbal camera you can take anywhere