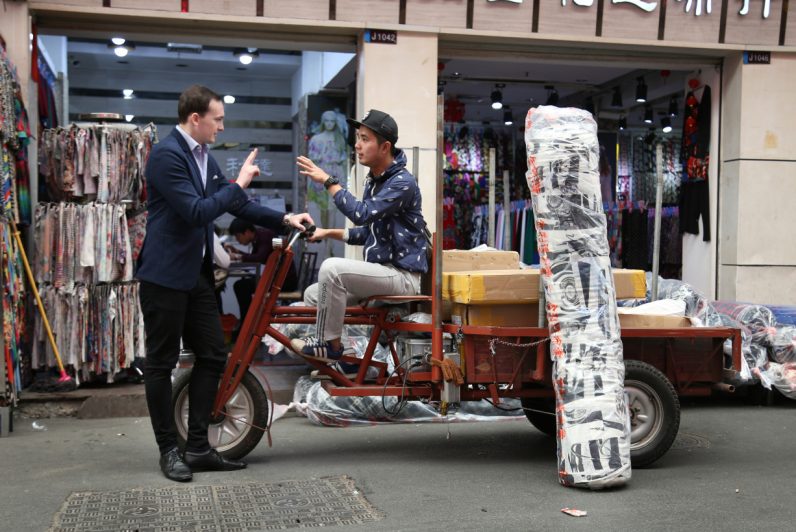 Last week, we discussed About You, a German startup that wants to become the “Netflix of fashion.” This week’s growth story is about another German company that’s in the same business, Lesara.  However, Lesara differentiates itself from About you in that it doesn’t just sell clothes — it also produces them.

Founded in 2013 by Matthias Wilrich, Robin Müller, and Roman Kirsch, Lesara has quickly become a fashion empire that is now present in 24 markets, thanks to a new approach to business. In 2016, it won TNW’s Tech5 competition, presenting a growth in revenue of 7,950 percent over the previous three years.

The new approach that Lesara is pioneering is called “agile retail,” a model that will free us from time-consuming fashion shows. In agile retail, trends are set by customers instead of a handful of fashion designers, all thanks to big data.

To find out whether “agile retail” was just another empty marketing term or a substantial innovation, I reached out to Roman Kirsch, the 30-year-old Lesara’s CEO.

Yes, he’s very young and partly it’s because he started early. “When I was 13, I initiated a business importing clocks from China,” he told me. “Life is short and we want to make the most of each opportunity.”

After this minor detour about Roman’s age, we got right into discussing the origin of Lesara and it’s novel approach to the fashion industry.

TNW: What did you see in the market that was missing?
Roman Kirsch: I was traveling to Asia as CEO of my previous company and I got to understand the potential of the Asian market. I saw companies like AliBaba that were moving tons of goods from East to West.

I was inspired by them but, at the same time, I saw their limits. I thought that the model of their supply chain could have been vastly improved. This is when the idea of “agile retail” came in.

What’s “agile retail”? Just another buzzword for marketing purposes?
No, I don’t think so. For our industry, the most important innovation of the last decade has been “fast fashion,”, that’s the model introduced by companies like H&M.

In a way, agile retail is the smarter and faster brother of fast fashion. Traditional fast fashion companies are not fully in control of their supply chains the way Lesara is. They deal with long lead times, various middlemen, and high stock which makes them expensive and time-consuming.

Thanks to data analysis, we are able to spot the latest fashion trends at the moment they occur and can make them available for our customers immediately.

So, could we say that agile retail is a way to rethink the supply chain thanks to big-data?
Yes, that’s correct. On average, fast fashion companies need two to three months to bring new products to their stores. We can do the same in just 10 days.

This “on-demand” approach allows us to produce only what customers really want. This way, we avoid waste and we rarely need to mark our prices down.

How do the next five years look like for Lesara?
High on the priority list is to improve our personalized shopping experience, and to fine-tune the technology to make even better personal shopping recommendations and suggestions to our customers. An important aspect of this is the mobile shopping experience and especially our Lesara shopping app.

What’s something you’d like to know from the other founders that we’re interviewing for this series of growth stories?
I’d say: Who is another CEO you see as a role-model and why?

In this regard, Koen Thijssen (co-founder Bloomon) asks: “What has been so far the hardest challenge you had to overcome as a company and as a CEO?”
When we started out we didn’t have much of a fashion background. Many industry professionals told us that the supply chain innovations we had in mind weren’t feasible.

That for us was a really hard challenge but actually I think that was that outsider view that allowed us to challenge the retail business in new and surprising ways and got us where we are today.

Alex Zivoder (CEO GoHenry): What’s your answer to the famous Peter Thiel’s interview question: “Tell me something that’s true but nobody agrees on.”
I really believe that if you try to do something new and break from existing models and systems, experience can be counterproductive at times.

It’s easy to stick to existing knowledge and ways of thinking, and much more difficult to think outside of the box and be bold enough to disrupt what has been established, whereas if you approach the topic with a more “naive” mindset you might come up with new solutions.

There’s a fitting zen saying about this: “Zen mind, beginner’s mind.”
Yes, I think it aptly describes my attitude to business.

Read next: Google Maps is broken on some Huawei and Honor phones. Here’s how to fix it