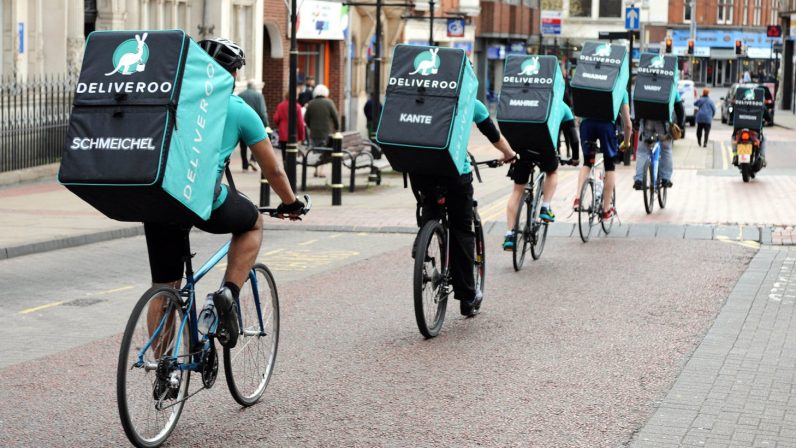 The digital revolution disrupted almost all businesses. A fierce competition ensued and, in many cases, clear winners emerged. For example, nowadays, Spotify is synonymous with online music, Google has a near-monopoly on online searches, and Amazon is the gold standard of e-commerce.

However, there are other sectors where the competition has been even harder and no undisputed ruler has triumphed. Food delivery is an example. There are dozens of apps that are fighting to become the Spotify, Google or Amazon of food delivery but none of them have fully succeeded yet. Among these apps, we find Deliveroo, Foodora, and UberEats. And I’m mentioning just the ones whose riders I could summon with my smartphone right now.

To find out more about what’s going on in this highly competitive sector, I reached out to Mike Hudack, Deliveroo’s Chief Technical Officer.

Founded in 2013 by Americans Will Shu and Greg Orlowski, Deliveroo won Tech5 UK in 2017 with a growth in revenue of more than 7,500 percent.

During our conversation, Hudack – a high-school dropout arrived in Deliveroo after four years with Facebook – described on several occasions the consequences of his company’s approach to business as “powerful.”

On this, we can all agree: Deliveroo and similar services are transforming society in a powerful way. Whether this is mostly a good or a bad thing, it largely depends on which seat you are given – for luck or for merit – in that reckless ride that is the gig economy. If it’s the saddle of your own bike, at times it might not be that comfy.

TNW: What does Deliveroo want to become in the next five years?
Mike Hudack: We want to become the best food company in the world. Part of it means simply that we want to become the market leader but it’s not all about that. It also means establishing a brand that represents for food what Spotify is for music. It means that what we ultimately want to do is to change the way people eat.

And how does your goal of “being the best” translates into practice?
I’ll give you an example. There are two ways of looking at delivery numbers. At the beginning, you look at “averages” – for example, the average time of delivery — and you try to get better at that. When you do get better, you don’t want to look at averages anymore. You start to take “extremes” in consideration.

This is the stage we’re at now. What we’re trying to do is find all the things that could possibly go wrong and eliminate them. As you can image, it’s a very different organizational problem.

The most common criticism raised against Deliveroo is that your riders have very poor working conditions: bad pay, scarce safety, and actual lack of flexibility are often indicated as the main problems. How do you frame this issue from your position?
Well, the first thing to remember is that Will Shu [Deliveroo’s CEO and co-founder] was our first delivery guy. He cares a great deal about our riders and he knows what the job entails. As far as I’m concerned, I think that the work that we offer is flexible and well-paid. In the UK, riders get £10 per hour, which is above national minimum wage.

We work with 15,000 riders and we receive thousands of new applications every month. The ability to make money with a job that you can start whenever you want and stop whenever you want is really powerful. I think that, all in all, it’s a great offer.

Let’s talk more about your role as CTO of the company. Why did you accept this position in the first place?
I remember the first time that I walked into Deliveroo’s office and I thought: “This can be a breakout company in Europe.” I like to work here because there is so much value in what we do on many different levels. We feed our customers, we employ thousands of people, and we also sustain small businesses.

At the same time, we’re trying to solve major technological challenges. In brief, when I had to decide I looked at these factors and I thought: “It checks all the boxes.”

It’s interesting that you mentioned how Deliveroo would sustain small businesses. I recently read a piece on the New Yorker that argued quite the opposite: delivery apps kill restaurants.
That’s really not true. We help restaurants achieve incremental growth through the increased number of customers we help them access. Restaurant owners can serve people who are at home, adding virtual tables to their restaurant. Again, I think that this is incredibly powerful.

Ok, now a question from another entrepreneur that I interviewed for this series of Growth Stories. Alex Zivoder (CEO GoHenry) asks: “What’s your answer to the famous Peter Thiel’s interview question (tell me something that is true that almost nobody agrees with you on)?”
I’d say that voice is going to be the next great interface. I think that Alexas and Google Home Assistants will be everywhere and everybody will be using them. It’s something that it’s not going to happen tomorrow but in five-ten years.

And what’s a question you’d ask the other entrepreneurs that I’m interviewing in this series of Growth Stories?
“What’s the most relevant book you’ve read in the last 10 years?” If you ask me, I’d say “The Generals” by Thomas E. Ricks. It’s a history of the American military command from World War II to today.

Read next: Master three of the most powerful digital creative tools on Earth for under $40