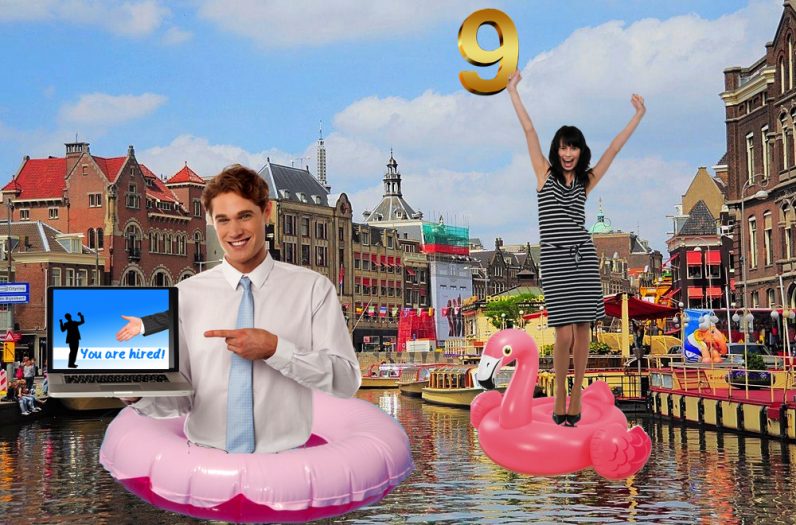 If you’re looking for a great tech city to find your next job in, then stop looking at Silicon Valley and start looking at Amsterdam.

The Dutch capital was named the best European Tech City to work in by Hubspot, which recently did a study into Europe’s tech scene.

This comes as no surprise if you consider that 578 international ICT (information and communications technology) companies have offices in Amsterdam, with 170 of them picking Amsterdam to establish their headquarters.

These companies are always looking for new and talented people to hire. If you’re one of those looking for a new job in this sector or wanting to start your career in tech, here are nine reasons why you need to focus your attention on Amsterdam.

“The variety of work you can find here is just massive compared to other places,” says Cristina Carstea, who works as a developer at trading firm Optiver.

Companies like BTC.com, which works in cryptocurrency; Takeaway.com, which works in the online food ordering space; and Adyen — the very first Dutch unicorn — are just a few of the diverse and wide variety of companies that are looking for tech talent to work with them in Amsterdam.

2. There is a small to no language barrier

Amsterdam is unique in that pretty much everyone speaks English, making it much easier for those who live internationally to come visit, live, and work in Amsterdam. There is a small to no language barrier in Amsterdam compared to other cities in Europe (i.e. Paris).

Leonardo Soares, software developer at Mollie Payments, explains, “It was very easy to blend in [in Amsterdam] because everyone speaks English.” While it’s likely you’ll pick up some Dutch living in Amsterdam (such as “gezellig” which has no direct English translation, but means cozy, comfortable, relaxing, enjoyable), you don’t have to worry about learning a new language just to work or live there.

3. Hotbed for startups and scaleups

The forward-thinking and technology-driven city that Amsterdam has become makes it a prime area for startups to start, grow, and flourish. There are quite a few incubators in Amsterdam to help any startup get off and running. Plus, with Amsterdam being a magnet of tech talent, it makes it nearly impossible for companies to not open up in Amsterdam to take advantage of the vast amount of tech talent.

Amsterdam also has tons of support and resources for those wishing to start a new company or simply work independently in Amsterdam. You may have even heard of The Next Web’s very own TQ, a curated tech hub in the heart of Amsterdam. Since many of its residents are from various parts of the world, they’ve worked to help make it easier for companies and individuals to move to and work in Amsterdam.

Unlike other cities in other parts of the world who tend to be more tech-focused, Amsterdam is unique in their public transportation and the emphasis and focus they place on that. Although well known for their bike-friendly streets, Amsterdam’s network of transportation including ferries, trains, buses, trams, and metros helps reduce traffic and allows easy movement throughout the city as well.

Another advantage, says Thomas Breach who’s a Talent Acquisition Manager at Elsevier, is that it’s just as easy to explore Amsterdam’s surroundings: “Obviously, you got the wonderful canals in Amsterdam, but if you want a bit more water, just jump on a train — and in half an hour you’ll get to the beautiful beach.”

It’s more common in Amsterdam to take a bike ride to and from work or to any other place in the city than it is to drive a car. Amsterdam is extremely bike friendly and encourages locals and visitors to bike in the city. It’s a great way to take in the city and get a little exercise at the same time.

Amsterdam leads the way when it comes to work-life balance among those who work in the tech field. According to the 2018 OECD Better Life Index, the Netherlands ranks number one in the world for their work/life balance.

In the study, they found that only 0.5 percent of the employees in the Netherlands work long hours (the average in the survey was 13 percent). Since most of Amsterdams’ tech workers don’t work around the clock, that gives them more time to explore the city and/or take up interests or activities after work.

6. Cost of living substantially lower than other tech-focused cities

For tech talent considering areas such as Silicon Valley and Amsterdam, they may find it surprising that Amsterdam ranks fairly low when it comes to cost of living.

Another bonus for international tech talent wanting to move to Amsterdam includes the lucrative 30 percent tax break given to foreign nationals which help make living in Amsterdam a bit better and your cost of living slightly lower.

One aspect of living in Amsterdam is the feeling of community and togetherness. “The sense of community is really incredible. The systems and processes in place make living easy,” explains Bronwyn Wainwright, senior content marketer at employee feedback startup Effectory.

“We really feel like a family here, because we spend so much time together,” adds software developer Patrycja Poplawska of stock brokerage firm Flow Traders. This feeling of community helps people from all parts of the world become comfortable and adjust to working and living in Amsterdam.

Amsterdam has become one of Europe’s most modern, young, and vibrant cities. Daniel Rigberg, software developer at fintech startup Dimebox, explains, “I’d say Amsterdam is the place where you can finish work and bike home [in] 20 minutes, feel the fresh air. You have enough time to get to work and get home and still do the things that you value.” The cultural life in Amsterdam is full of art, music, film, and theatre that can be explored and taken in after you get done working for the day.

Amsterdam is also home to the largest data-transport hub in the world, the Amsterdam Internet Exchange, which helps make Amsterdam a hotbed for technology startups and creativity and is proof of it being a forward-thinking and modern city.

9. Full of architecture and history

When you see pictures of Amsterdam, you don’t immediately think of tech hub. That’s because Amsterdam is full of great architectural buildings and history, along with their stunning canals. “It feels like living in an open-air museum,” says Fernando Hurtado who’s a software engineer at Picnic.

Along with all the art, music, and theatre, you can also visit the numerous museums that are all over Amsterdam to soak in the history of a city that used to be a 13th-century fishing village on the river.

You’ll find historic architecture anywhere you look, but taking a bike through the streets and along the canals can give you the dose of architecture you’re craving in a historical turned modern city.

Want to become part of it? You can, thanks to the project.amsterdam campaign. If you’re a software engineer or data scientist who’s ready for a career change, explore the 10 projects at some of Amsterdam’s most innovative tech companies. Find the job that speaks to you and APPLY.

The top candidates will get flown into Amsterdam for a 5-day “career test-drive”, flights and accommodations covered, plus a free 2-day ticket to our event of the year — TNW Conference 2018.