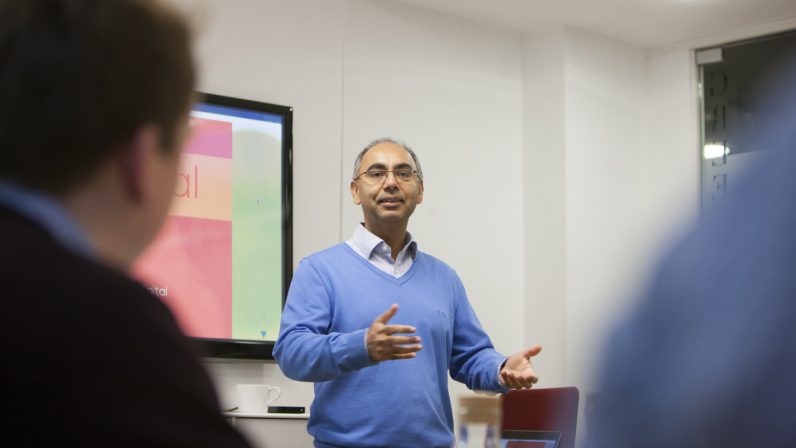 In 2013, British entrepreneur Paramjit Uppal sold his consulting firm Qedis – a profitable 300 people business – to US firm North Highland. Instead of retiring, he immediately hopped on a new business venture, founding AND Digital. a company that offers digital services.

In particular, AND Digital sells its clients three things. It guides them in their digital strategy, it builds digital products, and it teaches them the professional skills to do the first two things independently.

Apparently, this cocktail of digital services works. In 2017, AND Digital became a Tech5 UK finalist, boasting a growth in revenue of 1,640 percent over the previous three years.

To know more about this company and its unusual business model, I reached out to its CEO and founder Paramjit Uppal.

“We are 270 people now,” Paramjit started when I asked him about its company’s structure, “but we are organized in clubs that are like autonomous units. This way, we still have a startup vibe.”

Uppal speaks clearly and concisely, transmitting the idea that his life is the meticulous execution of a carefully conceived plan.

TNW: Why did you start AND Digital?
Paramjt Uppal: Because there was a demand for it. The vast majority of businesses needed to be better and faster at tech and the only way to do this is to have in-house tech people. But a lot of organizations are not great at attracting and retaining this tech talent. We set to solve that problem. We spotted the possibility to raise the bar in this sector.

What does it take to succeed in the digital world?
The key is people. At the end, it all comes down to a talent issue.

Why have you been growing way faster than your competitors?
Because we have a radically different mindset. All other digital accelerators say: “This is too difficult for you. We’ll build what you need and we’ll give it to you.” But what clients get is a black box, something that they don’t understand, own and can’t innovate on. We are the opposite, we build the products with our clients: We build, train, and coach their teams along the way.

But how can it be sustainable? If your clients become independent then they don’t come back.
It’s the opposite: When our clients become digitally savvy, they can solve bigger problems. Success breeds confidence and more investment, meaning that they need more people. Companies like ours can immediately flex up on the supply side to meet this increased demand. Technology is not something you can finish learning. In this sense, it’s more articulated than fishing.

What’s something exciting that is in the future of AND Digital?
Now, we train people to build products. In the future, we’ll train machines. That’s something that excites me. Still, humans will retain their peculiarity. Just to give an example, customer experience is a personal process, baked into consumer behavior and the organization’s culture and brand value. This is something that it’s not repeatable with AI yet.

Now a couple of questions from the other CEOs that I interviewed earlier in this series growth stories. Alex Zivoder (CEO GoHenry) asks the Peter Thiel’s interview question: tell me something that’s true that almost nobody agrees with you on.
I believe that my employees come first, then the clients, and then the revenue. It’s hard to stick to this belief. But at the end, it pays off.

Daniel Reina (CEO Tappx): What’s a thing you would change if you could restart your company now?
Maybe, I would try to do things in half of the time. But, in a way, this is already what I’m doing with AND Digital. My previous company grew to 300 employees in 10 years. With AND Digital we’re on track to do double this in roughly half the time.

And finally: What’s a question you’d like to ask the other founders that I’m interviewing in this series of Growth Stories?
We’re privately owned. We’re not backed up by venture capital or private equity. My question would be for the other companies that opted to avoid VC and PE funding. How did they manage to fund and drive rapid growth? Why they resisted the allurement of external funders?

Read next: Ethereum's creator is mad at Facebook for not removing fake profiles of him