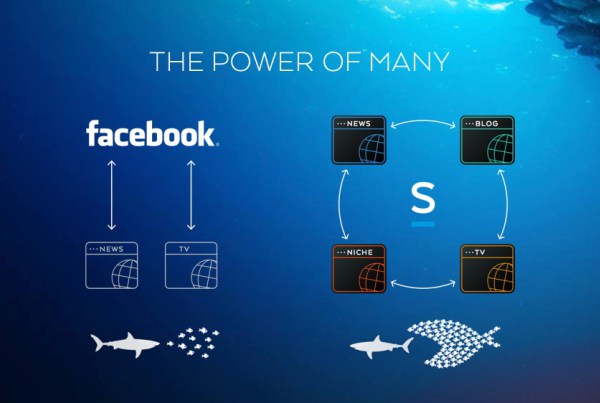 A couple of weeks ago, Facebook changed the recipe of its algorithm once again. Your newsfeed will be showing you more posts from friends and family, and less posts from publishers. This bad news reached publishers at the tail-end of an already complicated year.

2017 has been described as the year of the news industry apocalypse. Digital media juggernauts like Vice and Buzzfeed missed their revenue targets. Mashable was sold for a fifth of its former valuation. And the list goes on.

Facebook and Google are the main culprits. The duopoly eats up more than 60 percent of the total US digital ad market – leaving crumbs to the other players. VC money – that fueled the growth of many media outlets – is not enough to keep publishers afloat. Journalism needs new business models.

Worried even more than usual by how I’ll make ends meet in the future, I reached out to a man that promises to make journalism profitable again.

His name is Magnus Hultman and he’s the CEO and co-founder of the fast-growing Swedish startup Strossle. Founded in 2013, the company aims to help publishers increase their content distribution and advertisers to drive quality traffic.

Strossle employs machine learning to propose users the right content and the right ads in the right context. In addition, it inserts publishers into a network of cross-promotion, the Strossle accelerator. This way, they can team-up and battle the duopoly on a more equal foot.

TNW: First off, a truly hackneyed question: what’s the future of journalism?
Magnus Hultman: The most important thing to understand is that there is no such thing as a silver bullet for publishers. The future is a blend of different business models. There will be ads, subscriptions, micro-payments, and even merchandising. Strossle can just make sure that the cocktail will be well shaken and stirred.

What should publishers do while tech companies fix the cocktails?
Publishers should focus on their journalistic work. Today you have many publishers that pretend to be tech companies. And, of course, they suck at that. We can use technology to give them more and better audiences but they need to decide what to do with them. That’s the most difficult part. You want people to watch a couple of videos and leave? You want them to be your subscribers? You want them to buy t-shirts? You need a content strategy for that.

So, despite everything, content is still king?
Yes, definitely! Empty distribution platforms are worthless. You need content to make them appealing. Just look at companies like Netflix, Amazon, and Disney.

I interviewed many founders of fast-growing Swedish startups for these interviews. You guys are all about the same thing: making content valuable again. How so?
I know the reason! Sweden is the land of Piratebay. We were the first to pirate music, films, and books. We were the digital Vikings out there stealing content! Then, we realized that stealing is not a sustainable business model. If you just keep plundering, soon there’s nothing left. The loot is gone. So we needed to fix what we broke. That’s why Spotify got started. And that’s why thousands of years ago we became Christians, leaving our hideous Viking helms and swords behind.

That’s an interesting view. All other CEOs described Sweden as an Edenlike tech ecosystem.
Sweden is a huge, empty country made of ice. The good thing is that we’re aware of that. To survive, we needed to expand. If you combine that with a truly inclusive society, you understand why things happen so fast here.

When I started this company, I never thought for a second to stay only in Sweden. We wanted world-domination from the beginning. I believe that only Swedes, Danes, and Dutch have this kind of mindset.

And why did you found Strossle in the first place?
This is my fourth startup. When you’ve been around for so long, you simply don’t have an alternative. It’s like an addiction.

What are the skills that you value most in the company?
An entrepreneurial spirit is surely appreciated around here. And I don’t mean a person with great ideas or anything like that. That is worth nothing. I have in mind someone who solves shit. That’s what an entrepreneur does. This is why we implemented almost a kind-of “franchising model” in our offices. Every country has the independence to solve its own problems.

Where are you present?
We have physical offices in 10 European countries, from the Nordics to Spain and Italy.

Will you ever launch in the United States?
I don’t have enough cash in the bank for that! Moving to the US is extremely challenging. For every great European, there are three great Americans. It’s like an unwritten rule. Their execution power is fantastic.

We might have some tips, in case you change your mind…
No, don’t get me wrong: We will launch in the United States. It’s just that we’re not ready yet.

What’s a question you’d like to ask the other founders in this series of Growth Stories?
How can the European Union be so stupid 70 years after we founded it? It’s a wonderful idea but, as I said, great ideas are worth nothing if you don’t execute them properly.

And how would you do that?
To begin with, I’d implement one digital identity and one common corporate code. A couple of weeks ago, I had to fly to Milan just because they needed my signature on a piece of paper. This is not acceptable! If we don’t change something, we’ll never be comparable to the United States.

Your fellow countryman Ola Sars (CEO, founder Soundtrack your Brand) asks a more personal question: How do you see yourself in 10 years?
My wife asked me the same thing on New Year’s Eve! I frankly don’t know. But I promised her that I’ll soon come up with a 10-year plan.

—
In the lead-up to Tech5 2018 – the annual competition organized by TNW and Adyen which celebrates Europe’s fastest-growing tech companies in the Netherlands, UK, Germany, Spain, France, and Sweden – we’re launching a series of remarkable stories of businesses that experienced extreme growth. If you are a startup with an inspiring/remarkable/interesting story about finding your special metric that led to growth, please share it with [email protected]

Read next: Technology will have a massive impact on your financial future: here’s why