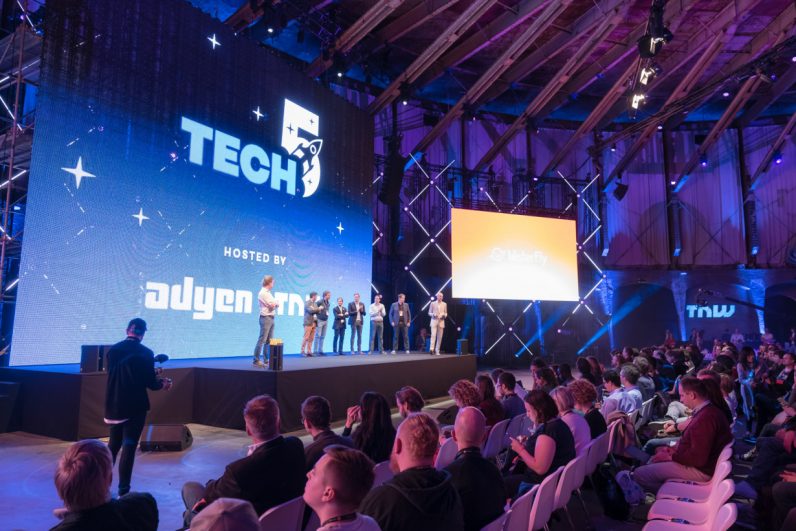 This is a call for the founders of the best and most innovative startups in Europe. Are you experiencing extreme growth? We dare you to prove it.

For the fifth consecutive year, we are setting out Tech5, our mission to find Europe’s fastest-growing tech companies and honor them at TNW Conference 2018, a premium stage for business ventures.

The story
In 2014, TNW and Dutch unicorn Adyen teamed-up to create something new: Tech5.

Modeled after the Eurovision song contest and the Champions League, Tech5 was conceived as a competition to scout the fastest growing companies by revenue.

Five years later, Tech5 represents an unmissable appointment for Europe’s tech ecosystem: every spring, high-growth startups get the opportunity to be showcased to an audience of VCs, influencers, and journalists.

Tech5 finds and showacases tomorrow’s tech powerhouses. It’s no coincidence that the competition’s finalists ended up raising over €10 B in the past four years.

But Tech5 is not just a celebration. Thanks to our unique blend of massive exposure and qualitative networking, winners can deepen their relationships within the ecosystem, connecting with key influencers.

Here’s how you can be involved
If you venture to join, the rules of the challenge are simple. Your start-up must have been founded in 2013 or later in one of these six European key-markets: France, Germany, the Netherlands, United Kingdom, Spain, and Sweden.

When applying, you’ll be asked to disclose your start-up’s percentage growth in revenue between 2015 and 2017. TNW will get back to you to confirm the growth rate. No pitch involved then, just solid revenue. Sign-ups close on March 1st, 2018. And that’s pretty much it.

The ambassadors
Following that, the winners of each country will be invited to a celebratory dinner in their capital, together with alumni and press. In this regard, we rely on six exceptional country ambassadors that play a central role in their tech ecosystems:

The finale
May 24th and 25th – during TNW Conference 2018 – the overall winner will be revealed live on stage. And it will be finally time to pop some champagne.

Join the ranks of companies like Fairphone, happn, Tiqets, Foodpanda, Deliveroo, Typeform, made.com, and marleyspoon and put your mark on Europe’s tech ecosystem! Do you have what it takes to be the next Abba of startups?

—
Tech5 is a partnership between Adyen and TNW X, our brand new b2b label. Are you a startup, corporate decisionmaker, or work in an ecosystem that could use an innovation boost? Check out tnw.co/x to see what we can do for you.