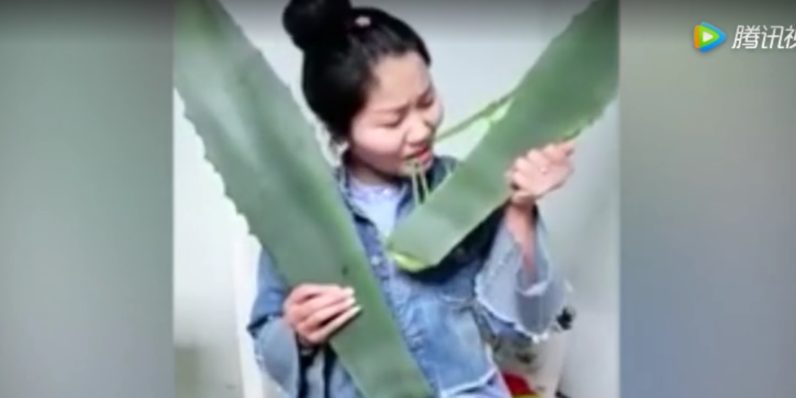 Chinese health vlogger Zhang bit off what she couldn’t chew in a livestream — which landed her in the hospital.

Zhang filmed herself eating what she thought was a massive leaf of aloe vera — which is probably not the best way to get aloe vera’s benefits to begin with. Regardless, what she was actually eating was Agave Americana, a highly-poisonous plant that looks very similar to aloe.

At first, she gamely chewed on the leaf, then started commenting on the incredibly bitter flavor. After further attempts to choke down the plant, she began to feel poorly and turned off the livestream. Zhang was rushed to the hospital shortly after, when she started breaking out in blisters. Her stomach was pumped, and she’s doing alright as of the last report.

Agave can be consumed, after a fashion — agave nectar is a popular alternative to honey, and a certain kind of agave is the source of tequila. But eating raw leaves is a recipe for disaster, or even death.

Zhang is apparently trying to make it in the world of Chinese vloggers, a burgeoning industry with lots of money on the table. According to Forbes, China’s online celebs can make tens of millions of dollars livestreaming themselves doing everyday things — such as eating what they think are healthy plants.

Of course, it’s not as though we in the States can judge. Over here, our aspiring video stars shoot their loved ones in the chest to test the thickness of books.

Read next: Netflix brings Dolby Atmos from the cinema to your living room