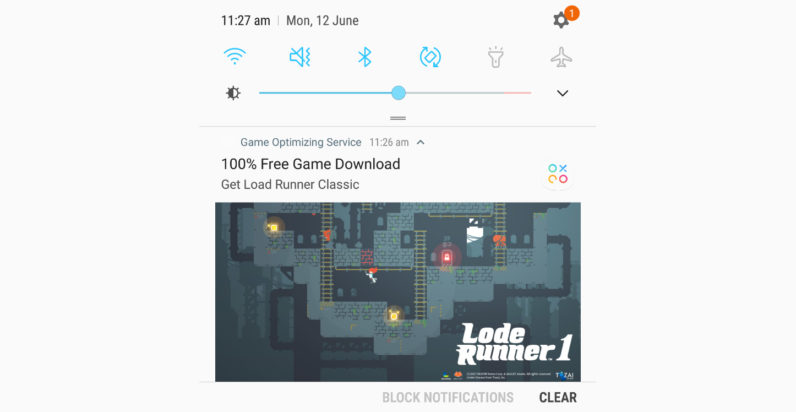 A group of angry Galaxy S8 owners has taken to Reddit to complain that Samsung has purportedly come up with an annoyingly unconventional approach to bombard users with ads: Push notifications.

Numerous users are reporting that over the past couple of weeks the South Korean titan has begun displaying ads via push notifications. According to the complaints, the culprit seems to be Samsung’s infamous Game Optimizing Service bloatware.

Preinstalled on most Samsung phones, the app traditionally serves to improve performance and curb battery drain during gaming sessions. However, it has also been defaulted to “receive marketing information” for better-tailored ad experience – which is why some users are now receiving ad notifications.

You can glance through the images below to get a better idea how these ads appear:

What is particularly annoying is how impractically difficult it is to opt out from Game Optimizing Service’s ad notification setting.

“I’ve had an advertisement for Lode (Load) Runner Classic pushed to my Galaxy S8+ twice in the past week or so,” one Redditor remarked. “I can’t see any clear way to disable these type of notifications […] [from] Game Optimizing Service.”

As fellow Reddit members have pointed out, affected users will have to open Game Launcher (another app entirely separate from Game Optimizing Service) and untick the ‘Receive Marketing Information’ option from settings. This will disable ads over push notifications.

In case Game Launcher happens to be missing from your list of apps, it probably hasn’t been activated yet. Here is how you can do this:

Once you’ve done this, you can follow the steps above to prevent Game Optimizing Service from receiving additional marketing information.

Given that it appears the app was always defaulted to serve ads via push notifications, it remains unclear why users have begun spotting the tacky ads just now. Still, factoring in the important strides Samsung has made to improve its TouchWiz user inteface, we certainly hope the trend is not here to stay.

Read next: This app lets you record split-screen footage with nearby friends