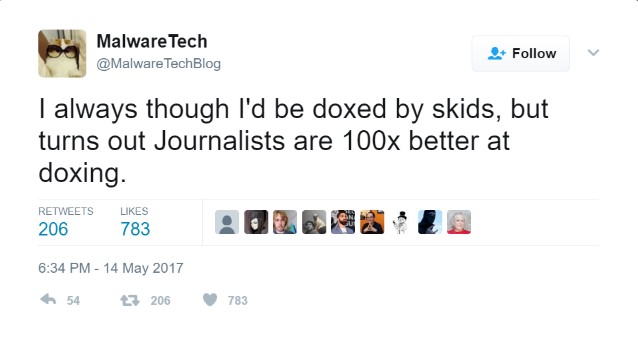 MalwareTech is a goddamn hero.

Last Friday, the UK-based security researcher stopped the WannaCry ransomware in its tracks thanks to an ingenious bit of technological trickery, thus preventing more machines from getting infected. We owe him a massive debt of gratitude.

At the very least, we should respect his privacy. MalwareTech doesn’t give out his name on his Twitter page or blog. There are no headshots. It’s obvious that he just wants to be left alone to get on with what he enjoys – hacking shit, and figuring out how stuff works.

Enter the British tabloid press, which late last night doxxed the man behind MalwareTech for literally no apparent reason.

And I don’t use the term ‘doxxed’ lightly. They pored through his online footprint until they eventually had enough evidence to identify someone who literally didn’t want to be identified.

@jeremiahg I refused to give out pics or personal info but their journalists are too good, they dug through a ton of OSINT and found me :X

I always though I'd be doxed by skids, but turns out Journalists are 100x better at doxing.

From what I can tell, the Daily Telegraph was the first publication to share his name, although other festering sphincters of bad journalism — namely The Sun, The Mirror, and The Daily Mail — weren’t far behind. I’m not going to link to their piece, because fuck them.

The Telegraph talks a little bit about how he’s self-taught, and how he stopped WannaCry by figuring out it had a kill-switch.

But that as far as the technical side of  the piece goes, because the rest is random factoids about MalwareTech uncovered through stalking other people’s Twitter and Instagram accounts.

It also mentions how he lives with his parents, and proceeds to dedicate several lines to how he likes to eat pizza. It even stole a picture from his Twitter page showing some pizza boxes, just to hammer the point home.

The weird emphasis about his fondness for pizza, and how he works from a small bedroom in his parents’ place? That shows they don’t actually respect him, or what he’s accomplished. To the hacks at The Telegraph, MalwareTech will always be some sad basement-dwelling hacker nerd.

And of course, once the Telegraph piece was published, other newspapers soon started darkening MalwareTech’s doorstep, and harassing his friends.

For the record DailyMail didn't find my name / location, they are only printing what was already printed by another paper.

Journalists found the girl in the photo posted on DailyMail and turned up at her house. Please if you want an interview that badly, DM me.

I guess the thing I can’t figure out is why it was necessary in the first place? How is it in the public interest?

It’s worth noting that in stopping WannaCry, MalwareTech has pissed off some very unsavory people. And now his name, age, appropximate location, and details of his family are in the public domain because a bunch of sleazy, shitty tabloids wanted some clicks.

Identifying criminals is one thing (We know, we've all done it). There's a public interest. But just the guy who helped out? … why

Read next: Fake WhatsApp.com URL gets users to install adware