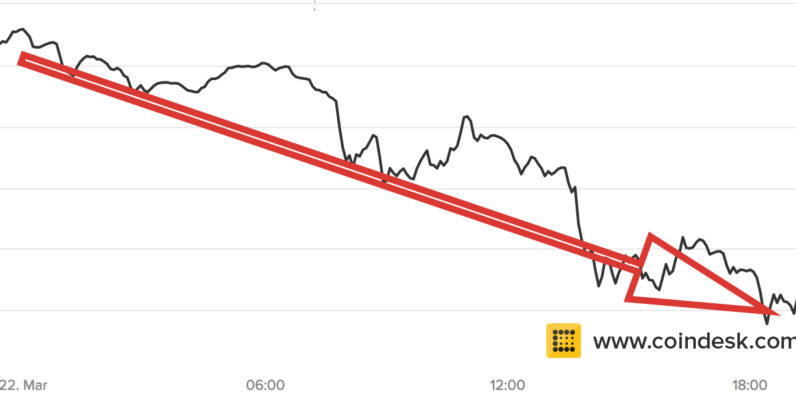 After reaching an all-time high earlier this month, Bitcoin prices are coming back to earth.

The current price (as of this writing) of $998 a coin is down more than 20-percent from its previous high, and down 10-percent today alone. As with all Bitcoin peaks, the fall is typically just as dramatic as the rise, and often just as quick.

Bitcoin is a volatile currency, so ebbs and flows — and often dramatic ones — are par the course. This fall, however, may have been due, at least in part, to a few news stories over the past couple weeks.

As optimistic as some are about Bitcoin, news of the SEC shutting the door on the Winklevoss twins’ proposed exchange-traded fund (ETF) was the first of a series of dominos. An ETF allows an index, or a group of indexes, to be traded like a stock. In short, it would have allowed quicker transactions and greater accessibility, as well as the ability to roll these indexes into investment accounts like an IRA or 401(k).

The SEC said it was “disapproving this proposed rule change because it does not find the proposal to be consistent with Section 6(b)(5) of the Exchange Act, which requires, among other things, that the rules of a national securities exchange be designed to prevent fraudulent and manipulative acts and practices and to protect investors and the public interest.”

After the SEC news, Bitcoin prices crashed, but quickly recovered.

Since, we’ve also seen bad news from China. Currently, nearly all Bitcoin transactions come from Chinese exchanges, government regulators announced it would begin to crack down on the cryptocurrency. This led to China’s three biggest exchanges imposing transaction fees on all trades, before eventually blocking customers from withdrawing the currency.

And it’s not over. The SEC plans to make at least one more ETF ruling this month, and another that could follow in April. One, or either, could send the already volatile cryptocurrency reeling.

Bitcoin tanks below $1,000 on Business Insider

Read next: Nintendo offers fix for Switch but won't admit it's broken