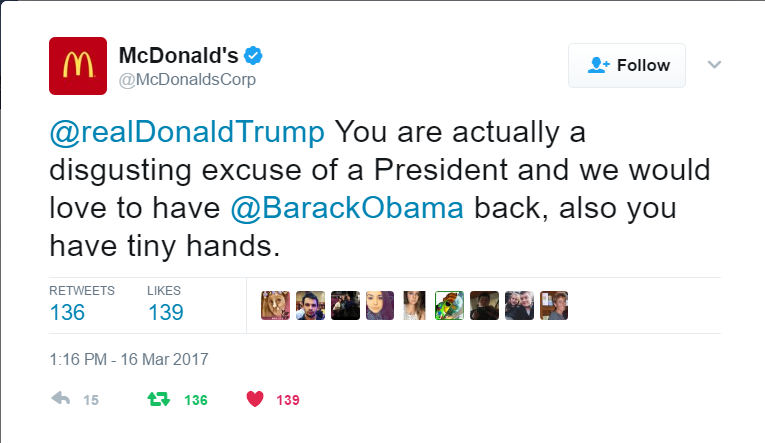 The McDonald’s corporate Twitter feed is a sleepy affair. It’s used mostly to communicate menu changes, and to answer people’s gripes about their meals, or how they desperately want the McRib to come back (it’s not, by the way. Get over it).

But today, it changed tone a little, as you can see above.

It’s not clear who sent the tweet (which was hastily deleted after nearly twenty minutes of being visible). While it’s possible that it was sent by a staffer who mixed up the McDonalds twitter feed with their own, I’m inclined to think that they were hacked, as the tweet itself was pinned.

We’ve reached out to McDonald’s for more information. When we hear back from them, we’ll update this post.

Update: McDonald’s has issued a statement saying the account was ‘compromised.’

Update 2: McDonald’s has issued a brief statement saying it’s account was “hacked by an external source,” so at least it seems no one is getting fired (except maybe someone in the security team). Here’s the statement in full:

Based on our investigation, we have determined that our Twitter account was hacked by an external source. We took swift action to secure it, and we apologize this tweet was sent through our corporate McDonald’s account.