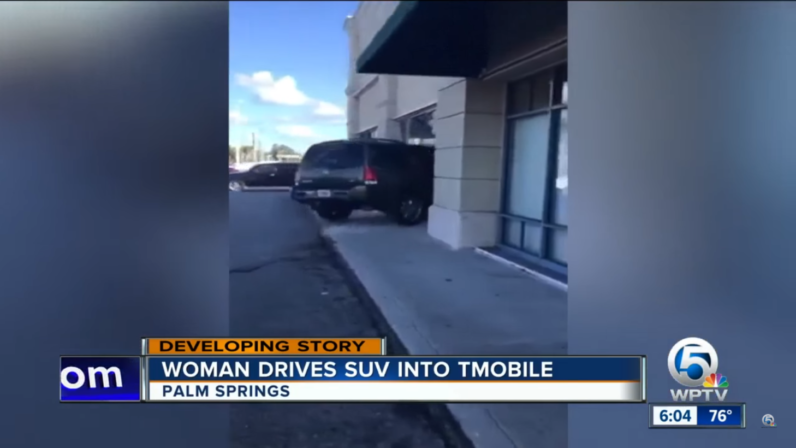 There are societally accepted ways to complain when dealing with a company. It’s fine, for example, to ask to speak to the manager, or to bitch about them on Twitter. But slamming your car into a shop front? Yeah, that’s not cool.

Someone who recently learned this lesson the hard way is Shinobia Montoria Wright – a 26-year-old resident of Palm Springs, Florida. After Wright cracked her iPhone screen, she drove to her nearest T-Mobile store to demand a replacement. It was, she said, her birthday and she would “bug out” if she didn’t get a new handset.

Unfortunately, that argument didn’t hold much sway with the T-Mobile Store staffer she spoke with, who declined her request and also noted that she appeared to be under the influence of a substance.

Still reeling from the rejection, the following day she drove her 2005 Nissan Armada SUV into the store, causing more than $30,000 worth of damage. One staff member was injured after a display case fell on top of him, and the city of Palm Springs has since declared the building to be “unsafe”.

Wright then exited the vehicle, and brought her hurricane of destruction indoors. Using a squeegee she took from her vehicle, she started smashing displays. When an employee tried to prevent her from entering a staff-only area, she attacked the man, causing “visible damage” to his neck.

Cops later arrived and arrested the woman, who was charged with aggravated battery, battery, burglary, criminal mischief over $1,000 and reckless driving. She also underwent surgery at a local hospital, in order to repair damage to her forearms caused by the crash, and is undergoing a mental health examination.

Police later concluded that drugs and alcohol weren’t a factor in the crash. Wright told cops that she was having “a bad day”, and was upset that she was unable to get a replacement for her cracked iPhone. She insists that she had insurance.