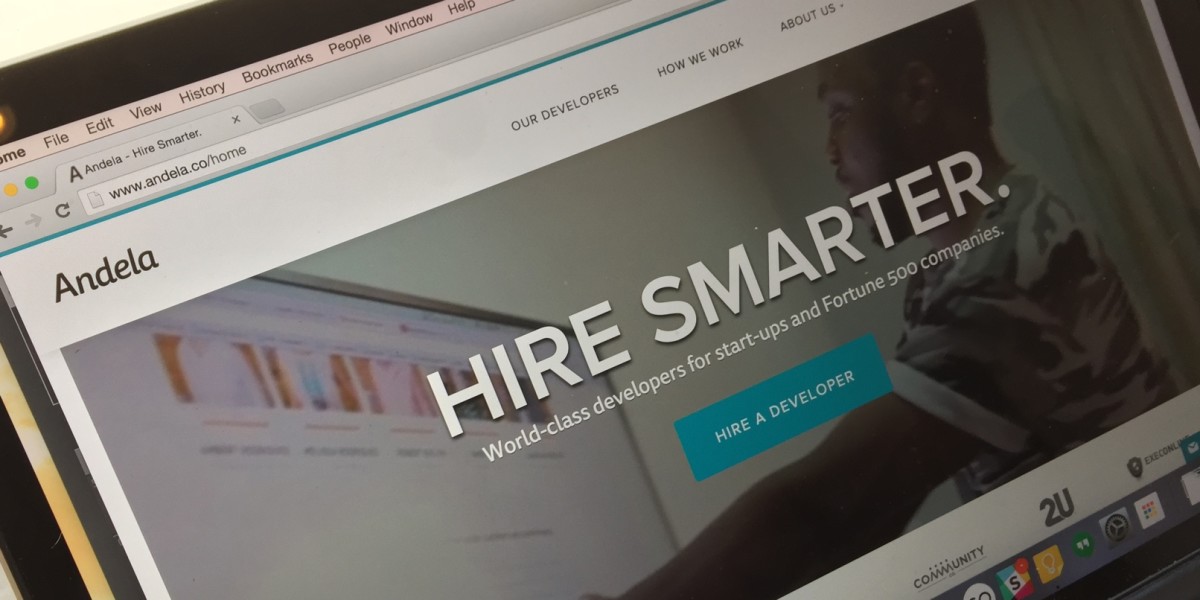 It’s well established that Africa has a severe shortage of software developers; it has for a long time. Back in 2011, the Kenya ICT Board’s Julisha report quoted 45 percent of respondent firms saying good software developers were difficult to find.

The EY 2013/14 Sub-Saharan Africa Talent Trends and Practices study confirmed this ongoing issue. The study found 31 percent of firms in the region are employing the same number of expats, while 16 percent plan to hire more. The Technical University of Kenya says the skills shortage amongst ICT graduates is due to low levels of awareness of careers in ICT among young people.

It is not just a problem that affects Africa, but software skills training firm Andela believes that the continent – while being part of the problem – also holds the solution due to its critical mass of talented young people who are struggling to find jobs in other industries.

“There is virtually zero unemployment in software development as a field. Meanwhile, in many parts of the world, bright, driven young people who could be competing for those jobs are unemployed or underemployed,” Andela CEO Jeremy Johnson says.

“In Nigeria, the unemployment rate for young people is more than 55 percent, and significantly higher when underemployment is taken into account. In short, Andela is aimed at meeting the need for technical talent while creating pathways to economic empowerment for young people across Africa.”

Andela is not the only company looking to make sure African developers are trained to the standard required by major organisations. There are a number of institutions focused on empowering young people in Africa, including the African Leadership Academy in South Africa, Spire in Kenya, and Ashesi University in Ghana. South Africa’s Project codeX is skilling-up local youth in developing, while Muzinda Hub and Moringa School are running similar projects in Zimbabwe and Kenya respectively.

Johnson, however, believes his company stands out from the rest.

“No other institution is employing the same self-funding training model that has led Andela to become the most selective tech training programme on the continent,” he says.

The company has certainly enjoyed significant success since launching in Nigeria in September last year. It has had more than 15,000 applications, and recently announced a launch in Kenya. Last week, it secured a funding round – with a value that could be as high as US$10 million – led by Spark Capital, which will be used to help it reach yet more African countries. Its list of backers was already impressive, including Steve Case, Omidyar Network, Rothenberg Ventures and Learn Capital.

The model is simple. Andela describes itself as a “global talent accelerator”, and aims to produce top-class developers and connect them to top employers across the world. Several Fortune 500 companies, such as Microsoft, use Andela-trained developers, with the company aiming to produce 100,000 in the next 10 years.

According to Johnson, Africa is ideally placed to meet the global shortage of top quality software developers.

“Over the next two decades, more people will be poised to enter the workforce in Africa than the rest of the world combined,” he says.

“Many of the opportunities that will be available will require a technical background. We’re preparing brilliant young people not only to compete for these opportunities in the years ahead, but to build the companies that will transform Africa in the 21st century.”

The company is very selective, recruiting only what Johnson calls “Africa’s best and brightest”. It then pays them to learn software development, mentors them, and finances their education through the client work they obtain upon finishing their training. Andela has a campus in Lagos, and has just opened a new one in Nairobi.

Johnson says Nigeria was the obvious choice of location to launch the company, but adds Andela has plans to operate across the continent.

“With the largest population in Africa and a 55 per cent youth unemployment rate, Nigeria served as an excellent place to begin our work of training Africa’s best and brightest to become world-class software developers. Also, one of our co-founders Iyinoluwa “E” Aboyeji, is a Nigerian serial entrepreneur, and he helped us get off the ground quickly,” he says.

“Building the programme in Kenya will give Andela a chance to tap into an incredible tech ecosystem that has been growing rapidly since the introduction of M-Pesa, and continue to attract top talent across Africa.”

It is not a non-profit exercise, however. Andela generates revenue through the client work its developers do upon completing their initial six-month training. Though the company does not disclose revenues, the caliber of investment it has received suggests many see the scale of the opportunity.

Young Africans looking for careers in Web and mobile development have also been quick to see the advantages. Andela’s courses are all extremely over-subscribed, with the company having a one per cent acceptance rate. Companies wishing to hire developers are finding Andela, rather than the other way around.

“We have very active online and word-of-mouth marketing efforts underway in Nigeria to recruit young people to apply to Andela,” Johnson says.

“And in the United States and Europe, we have seen strong inbound interest from companies without a major marketing effort.”

Read next: How I grew a startup the hard way