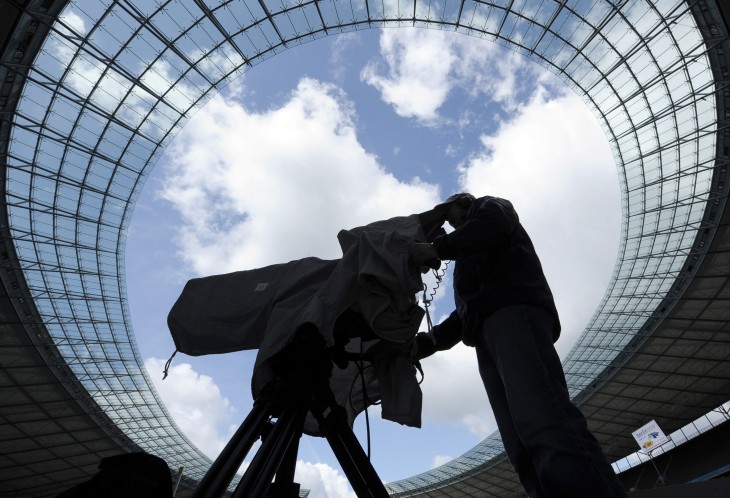 Turner Broadcasting held its second demo day today in San Francisco for its Media Camp accelerator. After three months of working with the media giant and its subsidiary networks, five startups took the stage to make their pitch in front of investors and the media. For two hours, all of the companies made their case for why they deserved to be invested in, but it was apparent that most, if not all, had a solid understanding of their market and a hopeful business plan.

Here is a recap of all the companies that presented:

A service aimed at reinventing animated television, Plumzi has already received seed funding led by Insikt Ventures, Disney and Turner. It says it is working with major animation studios in the US and next up, it is aiming to build relationships in Japan.

Plumzi feels that with television, viewers are interested in interactivity and an experience similar to what you might find with a tablet device. Through the use of it’s “Active Show” technology, it allows kids to participate in the story of an existing TV episode and allows them to help characters using touch, voice, and tilt.

The company will reuse 100 percent of the production assets from existing TV episodes to create a new game, taking 3 to 4 weeks to accomplish. It believes that it has created a new category of entertainment, combining viewing on a TV where you’re driven by stories and using a mobile device, driven by gameplay.

On the business side, company CEO and co-founder Guillaume Cohen says that typical animation studios will release two or three games per year and spend on average $500,000 to $1 million each time. With active episodes from Plumzi, he says that he expects to release more than 20 episodes per season — all of which will cost studios nothing thanks to the recycling of production assets and a revenue sharing model.

Tomorrowish’s claim to fame is saying that it has the only social media DVR. The company takes the US East Coast conversation during prime time, curates it, saves it, and then brings it together with the West Coast airings. It has formed partnerships with Twitter, Hulu, and GetGlue to help its cause, showcasing its viability as being more than just a Twitter client.

During the presentation, company CEO and founder Mick Darling, showcased an episode of Vampire Diaries that shows you the vide and the tweets on the same screen. How it works, through a dashboard, companies can add tags for what they want to aggregate and also what keywords they wish to blacklist, such as profanity. It has done work for Turner, FOX, FOX Now, E!, Opening Act, and Tru TV.

Darling touts the amount of volume that his company is handling. For Tru TV, it’s curating more than 13.8 million posts. With FOX Now, it’s 7.48 million.

For brands, Tomorrowish will give them more engagement with viewers on social media, sponsored content, and celebrity conversations.

Diving into the Social TV, it will work across all platforms so that viewers can interact with shows on mobile devices, TV, or computers. There’s also a mobile API that developers can tap into.

It has a SaaS revenue model where setup fees are based on features and the monthly fees are dependent on series fees. The company bootstrapped itself with $250,000 and is looking to raise $1.5 million to help it focus on the US market and will be hiring more sales, marketing, and development team members. It’s targeting TV networks, producers, and multiple-system operators.

Cinemacraft is a content marketing, discovery, and social engagement platform aimed at helping people find videos. Through its Videogram product, brands can create an “interactive pictorial summary of videos”.

It launched trials with Sony Pictures in May for its Videogram service.

The company has raised $1.5 million in funding from 500 Startups, NTT DoCoMo Ventures, and Turner Media Camp. It is about to close its second round of $1.5 million in the next 10 days.

Meograph bills itself as a multimedia creation platform that embeds right into anyone’s site and allows users to create content directly on the site and offers sharing and engagement tools. In the same way that Doritos and other companies are crowdsouring commercials for marketing campaigns, Meograph is leveraging this tactic in a managed offering.

It says that only one line of code is required to begin allowing people to engage. Once on your site, consumers could be invited and will create an audio, audio, image file to provide feedback. Once users are done, they can share their work through social media properties that could drive traffic back to the service.

Customers like Turner, ABC, Gannett, BBC, NCAA, NPR, and others are using the service so far. It has received investment from Media Camp, Global Venture Alliance, KAHM Capital, Early Global, and Plug and Play Ventures.

ChannelMeter is the “next generation video analytics platform” focused on YouTube to help creators get views on the social network. Company CEO Eugene Lee says there are 144,000 hours of video uploaded to YouTube every day and with the movement by traditional media to online platforms, but there needs to be a way to help better optimize the experience for brands.

The company takes your data and not only helps measure performance, but also to help you understand the impact. Once you’ve signed up for ChannelMeter, it imports all your data from YouTube to help remove the need to download data files that need to be analyzed — it’s all linked up.

More than 40,000 channels are being tracked every hour by ChannelMeter and it can handle analyzing 200 million videos.

So far, it has raised funds from Matter.vc and Media Camp. It’s launching efforts to raise $2 million in seed funding to help expand its product team, build sales force, and add new data sources from Yahoo, AOL, Brightcove, and others.

This is the third Media Camp demo day that has been held, although the second one in San Francisco. The previous class consisted of six startups, including Chute, Matcha, Showbucks, SocialSamba, Socialize, and Switchcam. All the companies that participate will receive $20,000.

Read next: Facebook pulls the plug on Credits as transition to local currency payments is completed