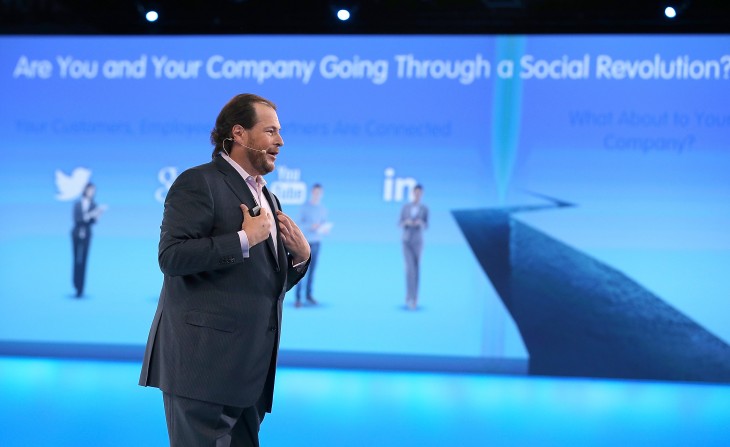 Salesforce.com is updating its enterprise social network called Chatter in a way that enables companies to tap into the interest graph. Chatter now features “Topics and Expertise”, integrating useful information they find from their social channels into the product to help them better discover insights, identify experts, and even find related resources.

The social layer of Salesforce

The addition of social intelligence features to Chatter comes just a couple of weeks after Salesforce released an update to its mobile app that allowed companies to access their customer data and create content into the Salesforce.com platform. It also reinforces founder Marc Benioff’s philosophy that Chatter will be the primary interface for Salesforce.

Now before we advance any further, it’s important to note that Salesforce Chatter first entered this world two years ago and is in a competitive industry, going directly against Yammer, Huddle, Jive, and others. But one thing that Salesforce is hoping will differentiate Chatter from everyone else is the fact that the data entered in Chatter is automatically shared across all its other platform applications, such as Desk.com, its Marketing Cloud, Work.com, and others.

Salesforce says that its customers have been looking for new ways to tap into their organization’s social and interest graphs. As it considers itself an enterprise social network, Chatter believes that it can tap into behavior typically used by people on sites like Facebook, Twitter, and LinkedIn to help companies be more productive and raise the “social IQ” of every employee.

Adding Topics and Expertise to Chatter

Joining existing features such as Recommendations, Similar Files, and Search, on Chatter is Topics and Expertise. Through this, users can analyze and categorize information within the Salesforce platform. The company says that the new Chatter will “seamlessly connect related experts, files, groups, and other information, all on a single topic page.”

How it works is that a user will log into Chatter and add a post to to the News Feed and can then apply tags to have it assigned to a specific topic. Salesforce has created an algorithm that will look at all posts to suggest specific topics that the user could assign to it. Users do not need to stick with the suggested tags and can create their own to apply to the post.

Once a topic tag has been added, that specific post will be linked to a Topic page, similar to what you might find on Wikipedia or perhaps even on Facebook Pages. Think about a Topic page as the catch all about that specific issue — so if someone posts something noteworthy in Chatter about, say, The Next Web, the system’s algorithm would automatically generate a related page. Users can go to the page and view all the relevant posts with the appropriate topic tag aggregated in one spot.

In addition, Topic pages include a list of top influencers so that users will know who has been sharing the most about the specific topic within the company. By clicking on a specific person, users can learn more about them on their Chatter profile page, along with topics that they are influential about, where they work, their interests, and more.

On the right-hand side of the page includes an algorithmically displayed list of documents shared by users on topic-related posts along with groups currently talking about the subject.

Since it’s introduction several years ago, Chatter’s Senior Manager of Product Marketing, Anna Rosenman, says that the service has been working on its evolution and how it revolves around the customer. It first started out being about collaboration and how it wasn’t a part of email and then moved towards being available on all mobile devices. Eventually the company included external parties into the conversation by allowing communities and partners to correspond with the company.

Rosenman says customers are looking for more and they’re turning to the consumer Web to see how innovation and evolution is taking place. Salesforce looked at the behaviors behind Twitter (Interest Graph) and how they utilized trending topics, LinkedIn (Expertise Graph) and how people view knowledge and background information, and lastly Amazon for its recommendation engine.

While these three services have not specifically been incorporated, the concepts and ideas behind them have — Rosenman says that Salesforce has recreated the key aspects from social networks that it felt would accomplish its needs.

An interesting note for companies though: Rosenman says that the new Chatter updates work best on the desktop, not on mobile. At this time, Topics and Expertise are not quite ready for usage everywhere. However, like the rest of Chatter, it has been natively integrated into all the other Salesforce products.