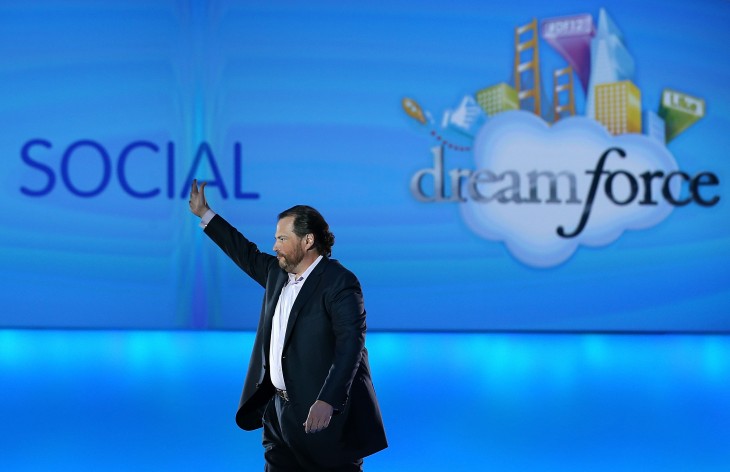 Enterprise cloud computing company Salesforce.com has released an update to Chatter, its enterprise-focused social network. The iOS and Android mobile apps are getting a refresh and, starting today, companies will be able to access, create, and act on customer data/information within Salesforce — all through the Chatter feed, across any device.

Two years ago, Salesforce.com introduced the world to Chatter, a service very similar to Yammer, Huddle, Jive, and others that have set out to help make the enterprise social.

Several months afterwards, it launched the first iteration of Chatter mobile, which allowed users to monitor their feeds, including posts from colleagues and alerts. The app acted almost like a basic form of Facebook, but for business, allowing users to upload photos, post status updates, or call or text right from the service.

Here are the changes in full of the redesigned Chatter:

With the release of this redesigned app, the company hopes that it will wind up being to the betterment of the 195,000 enterprise social networks that exist in Chatter. This ‘next generation’ iteration is intended to help companies better integrate Chatter with the rest of their offerings. Salesforce tells us that Chatter is the social layer of its platform, something that is natively embedded into all of its products, whether that’s its customer relationship management service, Desk.com, or anything else.

Salesforce set out to prove that “social” is not just a plugin nor something that should be siloed. Rather, it’s needs to be a core part of the entire business, including sales, services, and marketing.

The company believes that Chatter will break boundaries and take business processes and make it social. It says that the proliferation of mobile devices has certainly changed the expectations of employees.

Anna Rosenman, Salesforce’s Senior Manager of Chatter Product Marketing, tells us that 89 percent of daily mobile interactions take place on smartphones and tablets. Employees are using these devices in a way that is not only common to them (“consumerization of the enterprise“), but also to help change the traditional manner in which business is done.

We asked Salesforce why Chatter was going to be any different from services like Yammer, and it said that it’s more about building a holistic environment instead of having conversations in one app, it can be had across as many services as possible. In other words, it appears to be a much more streamlined than having conversations on Yammer or Jive and then marking up changes in a Google Doc or Excel spreadsheet.

The new version of Chatter is available now through the Apple App store and Google Play. Rosenman says that the company has released apps for the most common platforms and should Salesforce customers request it, additional versions for BlackBerry and Windows Phone may surface.