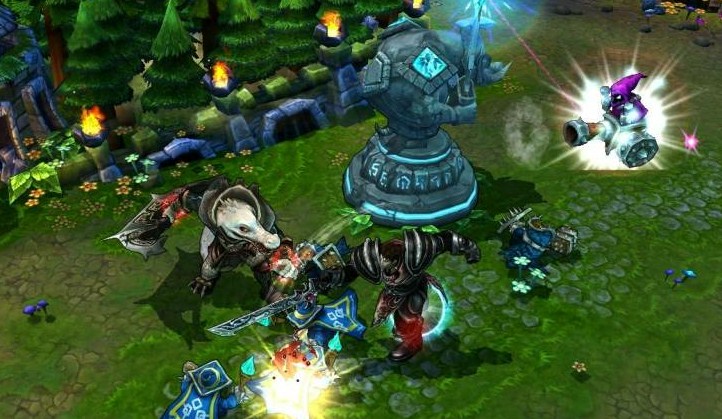 Growing under the rug and out of the sight of many is a gaming title that is rapidly spreading around the globe, and the larger competitive gaming scene. It has grown to the point that you need to know about it. Consider this your PSA. Please, meet League of Legends.

The game, often referred to as ‘LoL’ for short (cue chuckles) is a phenomenon. I mean exactly that, with no hyperbole included. The game raced past 30 million players, in late 2011, and has only continued to expand. If you have a friend or a kid who games, there is a very good chance that they have at least heard of the game, if not played it.

Your humble servant is just such a kid, son, and occasional gamer. And I’ve been sucked into League of Legends as if it was a drain and I was the mere proverbial hair. But, we’re getting ahead of ourselves. What the hell is a League of Legends? Allow me.

There are five players on each team. There are two teams. There are two bases, connected by roads, which are dubbed ‘lanes’ in game. Along the lanes are towers, that shoot powerful bullets. From each base, every so often, a stream of ‘minions,’ low-level computer-controlled monsters, are sent forth. The two teams occupy the lanes, kill minions for experience, earn gold, try to take towers, and in the end, crash the enemies’ base.

It’s complicated on the face of it, dead simple to get into, and nearly impossible to master. Once a player finds their lip in the hook, it’s down the rabbit hole to Summoner’s Rift, the game’s main map.

What’s important is this: each player controls a unique champion. Therefore, with ten total players, five on each side, there are ten unique player-controlled characters on the map at a time. They are diverse as they are unique, which is to say, greatly. Each champion has different skills, and requires different item ‘builds,’ what you spend that gold on. It’s a never-ending kaleidoscope of possibilities, one that is nearly impossible to imagine mastering.

Back to brass tacks: at last count, there are more than 500,000 people playing the game at any one time. That’s a lot. But that was last November, when the game had 32 million players. It’s only grown since then.

In the competitive scene, those figures are leading to impressive stats for competitive gaming. As we noted not two weeks ago:

This weekend, at the Cosmopolitan in Las Vegas, IGN is hosting its fourth IPL event, featuring the two (arguably) most popular esport titles in the world: Starcraft 2, and League of Legends. TNW has been keeping an eye on the business end of esports for some time, and a certain statistic stood out today: one hour into the event, over 100,000 people were tuned into the two games’ livestreams.

I wrote that post too quickly; by the end of the day, over 200,000 people were watching. League of Legends has exploded out of nowhere to become the most popular esport to watch, besting the ever-popular Starcraft 2. It’s a fresh upset, but the game is walking about on its own two legs. It needs no help to draw a crowd.

Now, why should you care? You are probably not much the gamer, but here’s why this is relevant to your life: the paradigm that has given LoL such explosive growth is rapidly becoming the norm for new games. Here’s how ‘free to play’ works: anyone can download the game, and play it as much as they wish. But for special add-ons like champion ‘skins’ (outfits), they have to shell out cash. It’s a touch more complicated than that, but trust me, it works. I’ve lost $25 to LoL (if I’m counting correctly), and it’s free.

From gaming, monetization, and software perspectives, League of Legends matters. In a big way. There, now you know. You are quite welcome.

Read next: Brin: we would not have been able to develop Google if the Internet had been dominated by Facebook