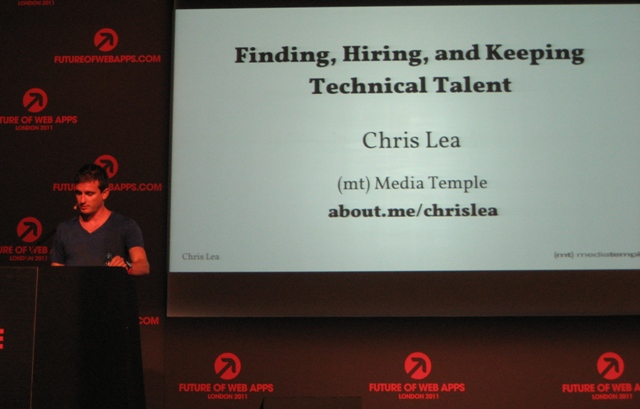 The Next Web has been at The Future of Web Apps conference in London over the past couple of days, speaking with some great folk from across the tech world, such as SoundCloud Co-founder Eric Wahlforss, and Mozilla’s Developer Evangelist Christian Heilmann.

A common theme that permeated many of the discussions we’ve had has been how to build the best products, looking at things like browser barriers and APIs. But it’s worth looking at the bit before the product building stage – the finding, hiring and retaining of top technical people.

Chris Lea, a Performance Engineer at Media Temple – a US-based Web hosting and cloud services company – was at The Future of Web Apps conference to give some tips on how to do just that. “I believe that building and maintaining the right team is the most important job you have as an operator, period”, says Chris. “If you have a great team, building  a great product is almost an afterthought”.

So with that in mind, here’s Chris’s 3-step process towards building the very best tech team.

“This is the hardest part”, says Chris. “There’s a big issue with supply and demand, and good technical talent is very scarce right now. A typical process for recruiting new techie people might be posting something on the company website, tweeting about it, telling your friends and maybe visiting some job boards. You might even go to a recruiter. But all of these approaches miss the fundamental issue companies are dealing with right now – they all assume someone is looking for a job. This isn’t true though, the right people are not looking for a job, the jobs are looking for them”.

First, you have to sit down and establish what skills you need, whether that’s JavaScript, RoR, Node, EC2, MySQL, Python or MongoDB. “Every single one of these disciplines will have a social scene, an online community”, says Chris. “You have to infiltrate those communities”.

Infiltrating means hanging out on IRC Channels to see who knows what, talk to people and build relationships. “You can just walk in and watch what’s being said”, says Chris. “On most of these hangouts, there will be small groups of people who are the rock stars, answering everyone’s questions. Those are the guys you want to talk to”.

Chris also pointed to mailing lists as a good starting point for finding the best technical people. “It may seem a little archaic, but a lot of technical people, a lot of discourse happens around mailing lists. Scour them, see who’s productive and, if you can, contribute. That will get you in so quickly, it’s crazy”.

Tech meetups are also a good way of meeting the right people, with many cities holding regular weekly sessions for particular disciplines, and this is a good way to build a shortlist of potential candidates. “If you operate a small business, you should always be recruiting”, says Chris. “You’re competition certainly is”.

Another interesting avenue into the heart of the best tech minds is through universities, but Chris warns against falling into the trap of heading straight to the CIS department. “That can work for certain things”, says Chris. “But the best way I found was to find their Linux User Group (LUG), talk to who’s in charge and offer to buy them beer or pizza in exchange for letting you pitch. This can get you interns, which are quite easy to turn into employees”.

Finally, Chris pointed to the importance of having a dedicated company ‘tech blog’, as distinct from the normal company blog. This is where potential candidates will look when they’re assessing a company. “They’ll want to know what you’re working on and what technologies you’re using”, says Chris.

Armed with one or more potential candidates for a position, how do you make the final call on whether they’re the right person for the job? This question can be divided into two parts – can they do the job, and are they the right fit for the company.

Can they do the job?

“A lot of the fun stuff is very new”, says Chris. “Everybody is learning on the job, and for the right people, this is a job perk. So rather than asking them ‘How have you done something a certain way in the past, ask them how they WOULD do something in the future. Ask them how they would tackle real problems that you actually have. It’s also important to include existing tech employees in interviews to ensure they’re not talking mumbo jumbo”.

Chris pointed to a job advert he recently saw requesting Node JS experience of 3+ years. But for the uninitiated, Node JS has only been around since 2009. “With a lot of these new technologies, smart is often better than experience”, says Chris.

Everybody’s CV includes a ‘hobbies and interests’ section, which could include anything from jogging and tennis, to reading and knitting. Chris thinks this is actually a good way of reading how suitable a candidate is for a role. “Do their outside hobbies involve figuring things out, or making stuff work? Do they prefer fixing cars to jogging? This is like a big green flag for me”, says Chris.

War stories – everyone has them, right? It’s important to identify instances where a candidate has screwed up in the past and ask how they handled it. This decreases the chances that they’ll make the same mistake.

The one final point Chris talked about was an interesting one. Ask candidates if they have a favorite text editor, and establish how prepared they are to argue its case against other options. “People who have been writing code for long enough should have honed their tools, and care enough about their workflow that this is a big deal for them”, says Chris. “I don’t care which text editor they like, as long as they care enough about it to argue”.

Do they fit in?

Whilst the question of whether they can do the job or not is certainly important, they also have to fit in with the culture of the company, a point that Chris feels if often ignored in recruiting. “The culture is critically important”, says Chris. “Would you hang out away from the office? Ask existing employes the same question. If the answer isn’t yes, then it’s no. They will be an anchor in the long run”.

“When you hire someone, implement a sunrise period”, says Chris. “Ninety days is probably about right. It gives both parties a chance to see if they both feel right about it. We’ve almost never had to say no to someone after those ninety days, but it has been worth it for the one or two times we’ve needed it”.

Assuming the sunrise period produces an indispensable employee, how do you then go about keeping them? As we’ve seen already, there’s no shortage of jobs out there looking for the top tech minds. “Find out what they value about their jobs”, says Chris. “Most great engineers I know are not wholly motivated by money, though obviously that is still important”.

This was a key point that SoundCloud CTO and Co-founder Eric Wahlforss hit on during our interview yesterday. So what does Chris see as key motivators for techies? “Lifestyle freedom is a powerful motivator”, he says. “This works if there are good communication patterns”. So it doesn’t have to be all about money, which is a good thing especially for young startups with budget constraints, and as Chris pointed out in one example, it could be as simple as giving them every second Friday off during the winter months and buy them a season’s pass to the local snowboarding slopes. If that’s what they like, of course.

This ties in nicely with one of Chris’s final points – holidays. “Make sure folk take vacation, preferably somewhere away from a computer”, he says. “Happy employees who have lives outside of work are better than unhappy employees who are married to their jobs”.