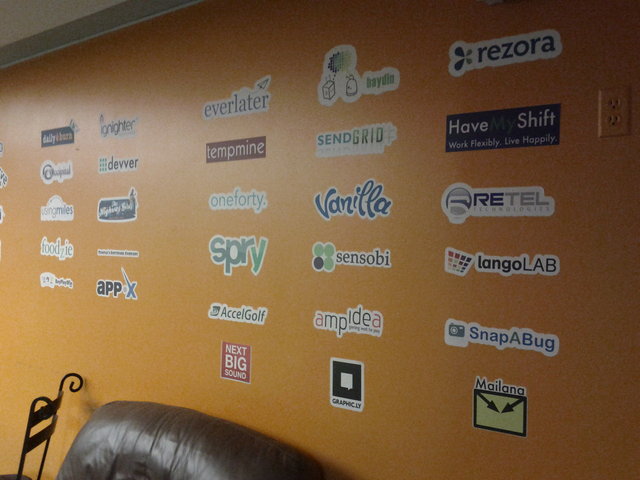 It took me two days, around 10 emails and a lot of begging, but I had finally stepped foot into The Bunker, the basement-level home of the original TechStars in Boulder, Colorado. All week long, nearly every interview that I had done mentioned TechStars as one of the driving forces behind the continued success of entrepreneurs in this town, so I knew that I had to get inside and find the special sauce that made the accelerator tick.

I had arrived early for a 2pm meeting with founder David Cohen so I was offered the tour, starting with the most important place in the building, the Founder’s Room. Existing in a mirror-walled space that used to be the setting for aerobics or yoga (more on Boulder’s clever use of property in my piece to come later), it’s an area that is packed with a mishmash of desks and monitors, the determined click-clack of keyboards being the pervasive sound.

“There are discounts for us at the Apple Store” says one of the assistants, then Cohen’s own assistant gives some instructions for what needs to happen in order for those discounts to be listed for the TechStars classes. Amid all of the seeming chaos in this space, every detail is meticulously planned. It’s part of a grand-scale process that I’d later find to be very important to how TechStars operates.

While in the room I met founders who had only met each other for the first time two weeks previous to this day. This is a new class, still polishing their pitches and figuring out what small pivots need to happen in order to assure success. They’re in the middle of what is affectionately known as “mentor whiplash”, where they sit in a series of meetings to find out with which of the numerous available mentors they’d like to work. Looking at their calendars is like a lesson in time management. As one founder would inform me, he and his team are in meetings an average of 6 to 7 hours per day right now, but these meetings are important to the overall success of the business.

As Cohen finished up a phone call, I had the chance to sit on the couch and work with a three of the twelve companies on their media pitches. It was abundantly clear that, while the pitches had been worked on previously, the bulk of their time had been spent on their products.

Finishing the time, Cohen had come out and was listening in on the practice session. Watching one team struggle to accurately portray the company, his first of many sage words were given — “Just tell me what you do.”

As I’d come to find out, this was very telling of how Cohen runs the TechStars network. It’s an environment of big dreams meshing with level heads, where alumni sit face to face with current classes to help guide the new blood on its path. According to Cohen, the entire thing can be summed up as “meaningful engagement. We’re not guru-based.”

“TechStars is about the cities that we’re in. It’s about being open and being accessible. We’re big believers in mentorship and allowing the program to be mentorship training.”

This echoes the sentiment that I read in an interview with TNW’s Courtney Boyd Myers that Cohen had done some weeks previous to our own. What I wanted to know, though, was the answer to one question — Why Boulder? As it turns out, that was a question with a much deeper explanation than I would have imagined.

“There is a karmic belief that goes into action in Boulder. You have companies that could be competition for one another, and yet they work together. ReturnPath mentored SendGrid for instance.”

But there’s more to the story than simply being one of karma. There’s a competitive, determined attitude in Boulder that I’ve not seen elsewhere. Cohen agrees, using Occipital (the creators of 360 Panorama) as an example:

“They couldn’t attract funding. That made them mad. So they went to work and now they’ve amassed a small fortune from selling their first product [RedLaser] to eBay.”

That determination is not something that can be taught or mentored, but TechStars is focused on giving the best possible experience to any startup that gets accepted.

“We have a general focus on quality. Why do we just do 10 or 12? It’s because we can’t help them all. It’s not about churning and seeing what works, it’s about making sure that each one works. We take a higher hit rate from that lower volume.”

In exchange for that mentorship, TechStars takes 6% in founder’s stock and no follow-on fund. That is to say, as Cohen puts it “we never do the next round. We’re always on the same side of the table and out with the founders at the end.”

Mentorship seems to have a long reach in TechStars. I was informed that some of the previous classes would be coming back later in the afternoon for a head-to-head session with the current class. At first I was told that the session was closed, that there was no way I was going to be allowed to attend. However, being the persuasive beggar that I am, I was later told that I could sit in, with the agreement that I would not write about specifics.

During the wait, there was a meeting with TechStars NYC Managing Director David Tisch. As Tisch’s Skype call was projected onto a screen, he gave what he called a “TechStars 101”, teaching important lessons on the common mistakes that startups make in communication and how to avoid them. I spent the meeting listening in, while gathering nuggets of information from one of the founders present in the current class:

“This is startup life on steroids. I get 6 hours coding because the rest of the time I’m in meetings about product and business. We pick 3 or 4 mentors to work with, who want to work with us.”

Urging him forward a bit, I asked him about the difference in mentality between what he saw in San Francisco and Boulder. “Nobody comes out and says it, but this is the anti-Silicon Valley. We have ties, and we want to keep those ties, but we don’t want to be what the Valley is.”

The meeting with Tisch closes after a Q&A session and the alumni session begins.

The graduates filed in, likely 25 or so in total. Taking seats face to face with the current class, the most notable things were the opening and closing of the session. It started with one of the “old guard” congratulating the current crop on being chosen. From there questions were passed back and forth about perfecting their products, when the first customers were signed up and whether or not sleep would ever have a chance to happen. In total, the 90-minute session was filled with frank talk about investors, investments, multi-million-dollar mistakes and lessons that should be learned early. The current class was challenged to give their pitches, then each of them was picked apart for clarity and content. To close, one of the founders from a 2009 class welcomed the current crop to an “exclusive group”. On the whole, it was something that very few people ever get the opportunity to do but one could easily see how vitally important a session of this nature could be.

Flashing back just a bit, Cohen brought up a point in the interview that came to light during the alumni session:

“You want to be a mentor? Just go. Don’t wait. Go help in a coffee shop. We push that mentorship in our startups and that’s what you’ll see from every one of them.”

Whether this mentality holds true in the rest of the TechStars groups, I couldn’t say. What Cohen finds to be important though is the fact that TechStars is exactly where it wants to be.

“We’re in the 4 cities that we want to be in. We’re in the 2nd through 5th largest cities for technology. I don’t know that we won’t have another TechStars in another city, but right now we’re where we need to be.”

Cohen talks of the Startup America network and how TechStars is releasing some of its application work. “It’s the right thing to do. We don’t look at this as giving it away. We record what works and we share that with the network.”

But every time, there is that pervasive feeling that something is important about Boulder and the community that thrives here. Cohen likely sums it up better than I could:

“The secret weapon of Boulder is one of collaboration and sustained mentorship. We strike the chord here that people care about. They care about the community from where they came. They want to be a part of making it better and TechStars is a blueprint of how to do that.”

The current TechStars class in Boulder graduates in early August. I’ll be coming back to Boulder and of course telling you more about them as time moves on. For now, just like The Bunker, that list is marked as confidential and carries a stern warning to not talk about the businesses listed without their permission. Collaboration and mentorship may be key, but there’s something to be said for being locked in a basement with pizza, caffeine and a mission. The fine balance of where all of these factors meet is what pushes TechStars to be the top-ranked accelerator in the United States.

Read next: Prehype: an incubator that helps corporations innovate like startups