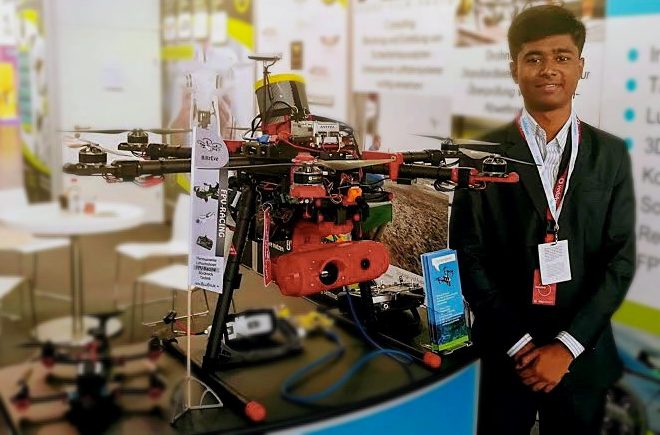 One of India’s popular drone makers, Prathap NM, has been found to pass off drones made by German and Japanese companies as his own.

Last year, Indiatimes published an article saying that Prathap, a 22-year-old independent tinkerer, has built over 600 drones from scratch, reclaiming parts from e-waste. The science grad reportedly started building drones since he was 16.

The report also claims that Prathap won the Albert Einstein Innovation Gold Medal at CEBIT expo held in Hannover Germany in 2018. However, there’s no such award at the CEBIT summit.

In a recent interview with Btv News Kannada, Prathap showed a photo featuring himself and a drone he claimed to have built.

. However, a statement from German drone maker BillzEye suggests that the owner of the company, Bill Gutbier, let him take a photo with the drone at the expo.

In another instance, Prathap put up a photo with a drone from the Japanese company ACSL on his Instagram. The company has denied any involvement with him on building drones.

At the beginning of this month, rumors on social media began to spread about Indian Prime Minister Narendra Modi roping in Prathap for a project with the country’s Defense Research and Development Organization (DRDO). However, Prathap denied this development to Alt News and Boom Live. A video featuring Prathap was shared by a fan/parody Twitter account last week, which you can watch below.

The question still remains as to why Prathap hasn’t been able to provide some proof for the 600 drones he has claimed to build. We have contacted Prathap to comment on these reports, and we’ll update the story if we hear back.

Earlier today, Bengaluru’s quarantine squad managed to locate Prathap, who was missing from home since Saturday and was violating quarantine rules.

Read next: Uber refuses to back down and heads to UK Supreme Court to defend its business model for the third time