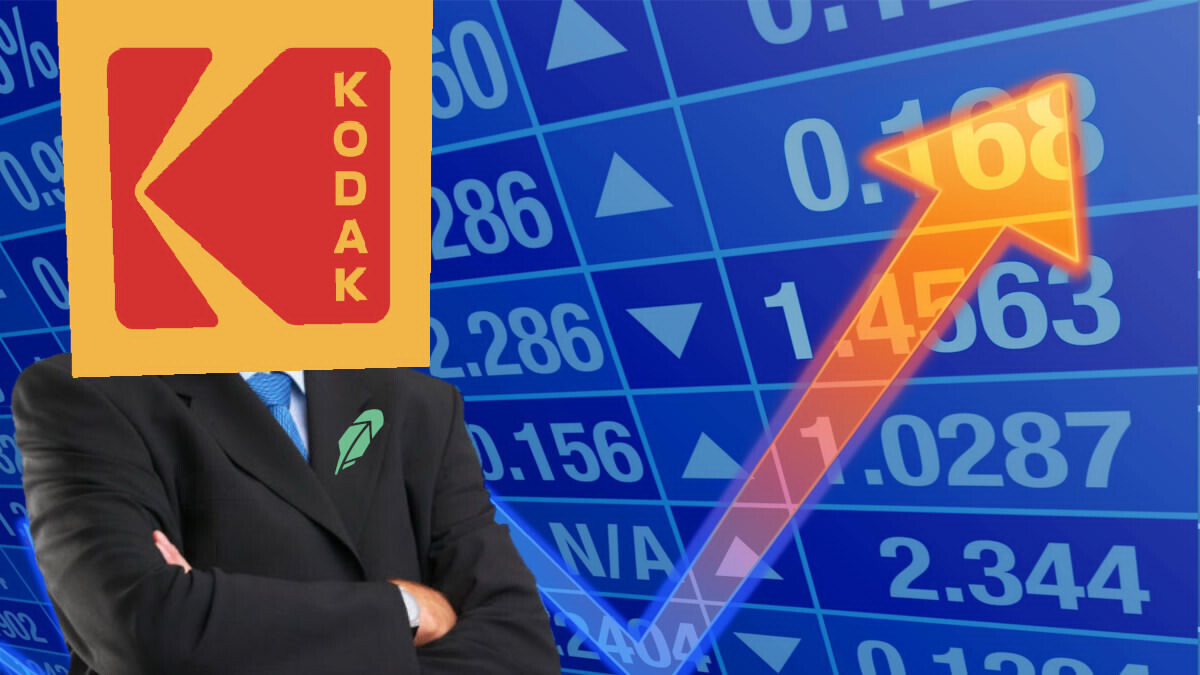 Trade in Eastman Kodak stock was halted multiple times on Tuesday to protect investors from volatility, as the embattled camera-cum-pharma firm surged more than 80% during the first hours of trade.

However, Kodak‘s latest pump was remarkably short-lived; after shooting to $13.06 in less than an hour, Kodak stock fell quickly to close 8% up by the end of the day.

This represented roughly $210 million gained and lost from Kodak‘s market value within a single trading session, after fighting to maintain a market cap above $90 million just one month ago.

While absurd, those movements are tiny compared to the monstrous 2,000% rally sparked by Kodak‘s $765 million government loan to fund an ambitious pivot to producing basic ingredients for drugs.

As one might expect, Robinhood traders jumped to capitalize on Kodak‘s seemingly miraculous resurrection.

On the morning of July 28 (when Kodak wasn’t pharma), roughly 9,300 Robinhood users held Kodak stock, according to the popularity data shared by Robintrack.

Two days later, that number had grown beyond 123,000; more than 92% of Robinhood traders with Kodak stock in their portfolios had bought in after news of its government loan first broke.

But word appears to have leaked early, sparking allegations of insider trading that led Kodak to announce an “internal review” to investigate the matter.

What was a $96.5 million photography company had suddenly grown to be worth nearly $2 billion in two days, only to see $1.5 billion of that valuation evaporate almost as quickly.

Kodak is all fun and games, until you bought the top

From the sidelines, watching a throwback brand like Kodak enter the stratosphere and return to Earth on potentially dodgy circumstances might seem entertaining, but the Robinhood users left holding its stock aren’t likely to see it that way.

After analyzing its initial pharma pump against Robintrack’s data, Hard Fork found almost all of the Robinhood traders that bought Kodak stock for its pharma play did so on its way from $8 to $59.

Just 9,300-odd Robinhood traders held Kodak stock prior to the deal, so I guess we can call these the lucky few.

At pixel time, Kodak stock trades at $7.79, 86% down from its pharma-peak, and well below the range required for all those Robinhood users not to lose money on their investment due to pesky allegations of insider trading.

Robinhood won’t let us do these articles anymore (boo!)

If authorities end up proving wrongdoing at Kodak, one can imagine the market sending Kodak right back to $2 — leaving almost all of the Robinhood users holding its stock in the lurch.

Unfortunately, as much as Hard Fork would like to report on whether any of those investors cut their losses during Kodak‘s latest pump, Robinhood no longer allows Robintrack access to its user data, but as of midnight on August 13 there were still 93,730 users with at least some Kodak stock in their portfolios.

“The trend data that is available on our web platform can be reported by third parties in a way that could be misconstrued or misunderstood,” said Robinhood in a statement to Bloomberg. “Importantly it is not representative of how our customer base uses Robinhood.”

Whether that’s true is cause for debate. But regardless, Kodak now sits prominently alongside Hertz and GAP on the growing list of companies that’ve lured in retail investors with spontaneous rallies this year.

If Kodak‘s 80% rally on Tuesday is anything to go by, those riding these rollercoasters had better get comfortable.

(Edit: This piece has been updated to clarify percentages in the 15th paragraph.)