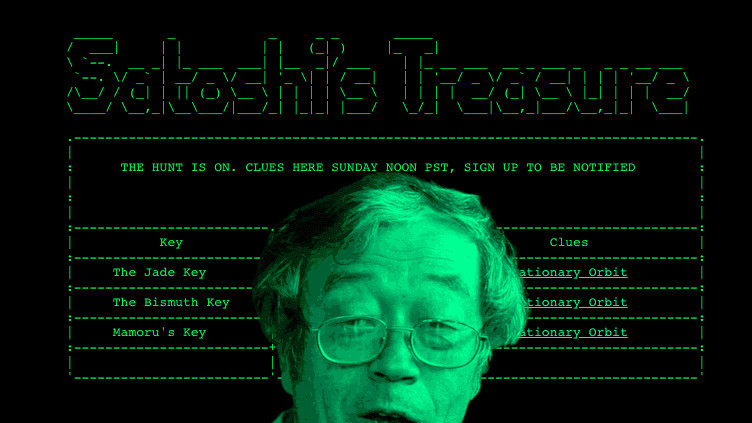 Satoshi’s Treasure, the alternate reality scavenger hunt for $1 million worth of Bitcoin, BTC has just released its 14th clue. Best part is: it’s loaded with $70,000 in Bitcoin.

“[Three] keys and additional $70,000 will be rewarded to hunters who solve the puzzle,” reads a notice on the game‘s website.

There are curious things to note here, besides the dope prize.

This clue is the “Zero Knowledge Key,” and it comes with a message: “Don’t be so SNARKy”. (Hint: budding cryptocurrency project Zcash utilizes technology known as “ZK-SNARKs” to keep its transactions relatively private.)

Satoshi’s Treasure began back in April. Inspired by Ready Player One, players are urged to work together in teams to solve puzzles that often involve interacting with real-world objects and locations across the globe.

The game’s organizers split private keys to $1 million worth of Bitcoin into 1,000 “shards.” The first individual (or team) to collect just 400 of them will immediately unlock the full prize.

Hard Fork has reached out to those behind Satoshi’s Treasure to confirm exactly how this additional $70,000 Bitcoin prize will be paid out, and will update this piece should we receive a reply.

So far, players have solved just 10 of the 14 released clues for Satoshi’s Treasure keys.

You can read hacker John Cantrell’s hints and tips for playing here, and learn more about Satoshi’s Treasure and its side-quests here.