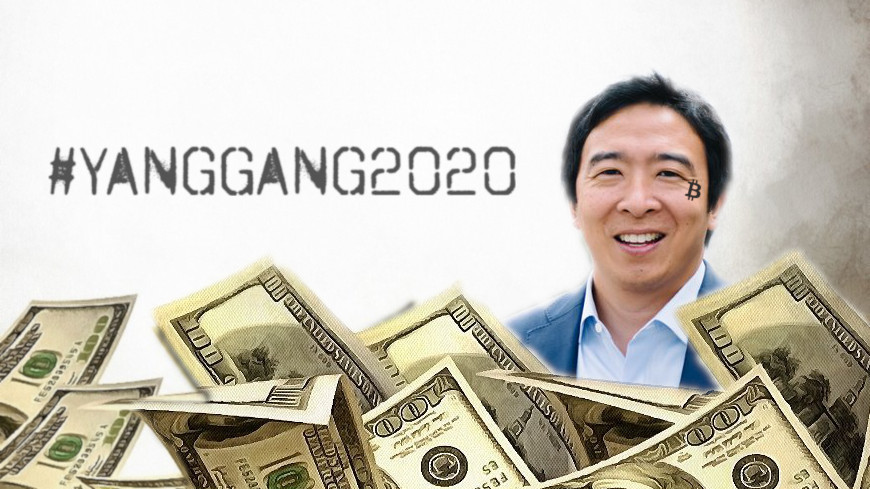 The hype surrounding the US presidential election in 2020 is growing palpable, and one candidate, Andrew Yang, is getting significant attention from the cryptocurrency community.

Yang, of the Democratic Party, is absolutely the favorite of internet memelords, but he isn’t the only one appealing to the blockchain crowd.

Hard Fork investigated the Twitter feeds of every confirmed presidential candidate (as well as a few rumored ones) to figure out who the cryptocurrency community prefers most.

Our analysis reviewed tweets from an exhaustive list of potentials (from Trump, to Bernie Sanders, Elizabeth Warren, and Tulsi Gabbard – even Kanye West.)

Focusing purely on tweets related to blockchain and cryptocurrency, Yang has garnered 75 percent of the interaction total, proving his effectiveness at capturing the attention of decentralized tech fans.

Most notably, Yang found traction when he opened his campaign to accept donations via Bitcoin, Ethereum, and a handful of other digital assets in July last year.

The move came in tandem with a message directly addressing the cryptocurrency community, sent during an “Ask Me Anything” Facebook session.

In it, Yang declared himself a fan of blockchain‘s “underlying technology,” and said cryptocurrency could be critical in creating a “digital-social currency.”

Yang Bucks are gonna pump Bitcoin, so let’s get this bag

The cornerstone of Yang’s appeal with the Bitcoin BTC crowd is an apparent shared belief in the concept of “Universal Basic Income,” which (in this case) involves the government distributing $1,000 every month to each US citizen over the age of 18.

Yang explained this vision during a recent appearance on the wildly popular Joe Rogan Experience (JRE) podcast. The effect this had on Yang’s exposure shouldn’t be understated.

This is a chart of Yang’s Twitter following over the past year. After Yang’s JRE debut on February 12, his count more than tripled, from below 50,000 to over 188,000 today.

While “Yang Gangers” are not exclusively cryptocurrency fans, Bitcoiners have been quite receptive of Yang’s plan to regularly hand out free bags of money.

A popular idea is to potentially spend the free “Yang Bucks” on Bitcoin, in hope of pumping its price (which would make them even richer.)

“Amateur economists” have even made a handy infographic displaying how Yang Bucks (in combination with Bitcoin) are poised to fuel a self-sustaining economy that’s supposed to protect against “AI & robots & shit.”

Here’s what Delaney and Kasich have to say about blockchain

The presidential buzz in crypto-circles is not all about Yang (just most of it). Delaney, another Democratic candidate, has recently tweeted about blockchain twice, both times with official-sounding rhetoric.

“Chair Giancarlo’s speech at the DC Blockchain Summit sponsored by the Chamber of Digital Commerce highlights the need for tech-forward regulatory solutions,” wrote Delaney. “We want savvy leaders guiding the country on blockchain.”

He backed those comments a few days later, when he described the blockchain community’s innovation as “inspirational.”

The true crypto-wildcard is John Kasich. Towards the end of 2018, Ohio’s former governor tweeted an article from a local news source that described blockchain technology as “Internet 10.0.” (For reference, the rest of the blockchain industry is still stuck in “Web 3.0.”)

Regardless, neither Kasich or Delaney have enjoyed as much engagement as Yang. While there have been efforts to squeeze “blockchain” into social media feeds, Yang is the only one to find true success by discussing decentralization.

By analyzing tweets with #YangGang and #YangGang2020 hashtags, we’ve ranked authors by interaction volume (their influence).

Whistleblowing non-profit WikiLeaks is the sixth biggest Yang Gang influencer (not counting Yang), having earned over 4,200 interactions with Yang-infused tweets.

There is also a surprising number of established “crypto-celebs” amongst the top 100. Indeed, our data suggests blockchain think-tanker Neeraj Agrawal is the 42nd most visible Yang Gang influencer, having earned over 400 interactions with hashtagged tweets.

Nic Carter, public blockchain investor, was number 86. We detected he received 92 interactions across a pair of choice tweets. Lawyer-slash-cryptocurrency pundit Jake Chervinsky just made the cut at number 95.

Perhaps the coolest find, though, was that Yang’s interest in Bitcoin is not recent. He actually tweeted about Bitcoin way back in 2013, when the world’s most popular digital asset was four years old.

“I sense the bitcoin [sic] price correction will make some Fellows [sic] nervous,” he wrote, referencing an article that detailed a sudden drop in Bitcoin price (from $1,079 to $576.)

The 2020 elections are still a year-and-a-half away, but consider that Yang’s rise in popularity was incredibly sudden (and super hilarious). With so long left in the race, it’s probable the Yang Gang is yet to reach its final form, but it’s definitely wising up to its potential.