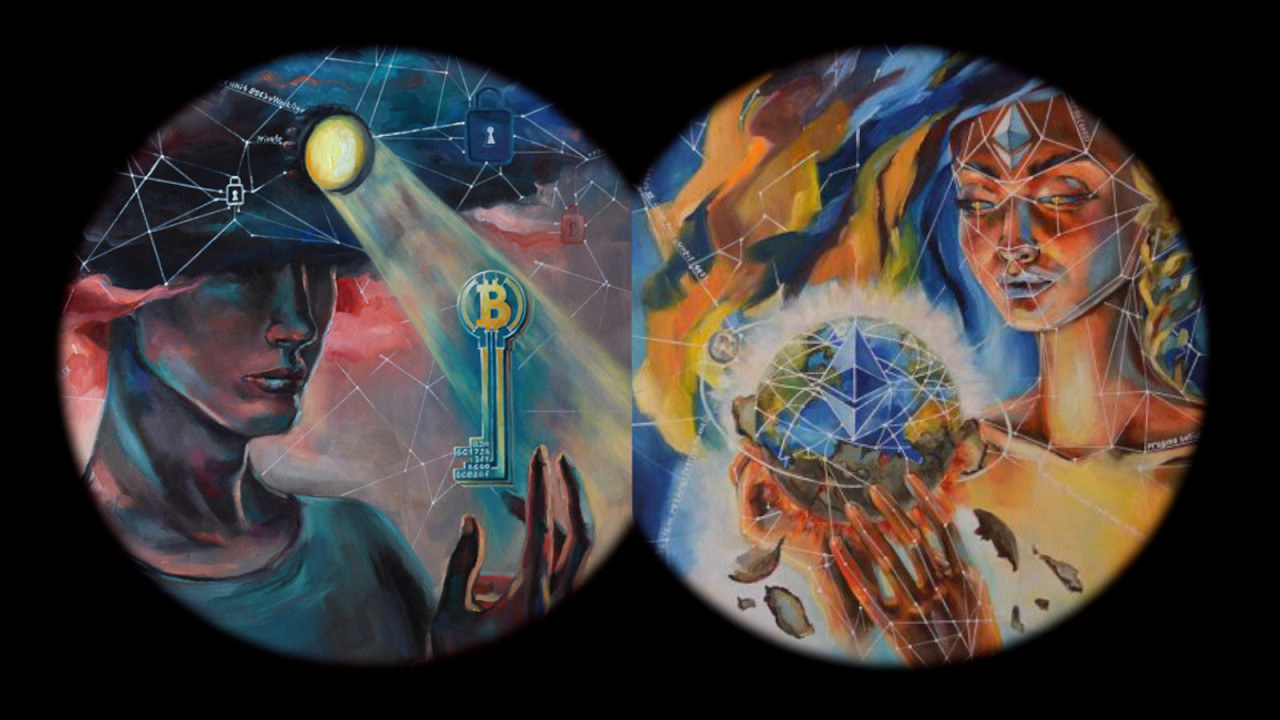 Over the past 10 years cryptocurrency, blockchain, and art have become the most surprising and unlikely of bed fellows.

Street art, graffitti, and memes are quite common, but the words cryptocurrency and fine art rarely appear in the same sentence. But that’s changing as one artist is making these worlds collide to produce something as individually unique as a Bitcoin wallet private key.

Toronto-based fine artist – Nelly Baksht – is one of a growing community creating works specifically for the cryptocurrency and blockchain industry. But she hasn’t always been interested in the decentralized technology.

For Baksht her love of art comes first, but after spending time with friends she became fascinated by the political power of decentralization, blockchain, and cryptocurrency.

Her blockchain-themed pieces have been showcased at specialist conferences all over the world, including Malta’s Blockchain Summit and the Blockchain Futurist Conference. You may also have seen them pop-up on reddit from time to time.

But how does a classically trained artist find her way blending fine art with visions of cryptocurrency and blockchain? Hard Fork spoke to Baksht to find out more.

Despite having an interest in art from a young age, and undertaking an intensive eight-year long art program at the Youth Art School in her native Russia, Baksht went on to train and practice as a corporate lawyer for seven years in her homeland.

Baksht told Hard Fork: “My passion for art has always been with me. While working as a lawyer I started a university art program in Graphic Design and graduated in 2008,” she continued. “After I moved to Canada, I happened to get into community of very talented artists, and I decided to realize my dream and dedicate myself to fine art.”

It might seem surprising to some that cryptocurrency and art have come together so strongly, but to Baksht it seems quite natural.

“In the modern world, a syntheses/synergy of different human activities leads to creation of new industries and movements,” Baksht said. “This is how cryptoart appeared  – [it’s an] art movement that combines technology and art.”

Indeed, we’ve seen Bitcoin hidden in a street mural, cryptocurrency themed posters, jewelry, and the French even held a “cryptoart” exhibition to celebrate 10 years of the decentralized currency.

It’s a common rhetoric in the cryptocurrency community that Bitcoin will disrupt age-old financial methods, and blockchain will change the face of the world as we know it. To the anti-establishment crowd this might sound great, but the reality of change to an unknown is dangerous and scary for the rest of us.

Instead, Baksht aims to create bright and positive pieces that look towards the creation of a better world, rather than the destruction of the old by blending her traditional fine art skills with her own visions of modern technologies.

“I had a goal to create something that shows emerging technology in a very positive way, something more creative rather than destructive,” Baksht told Hard Fork. “I did not have a goal of creating a new style. But the blockchain world is very different from the traditional world. And I wanted to combine cutting-edge technology with traditional fine art techniques.”

As with a lot of creative processes though, these works don’t always paint themselves. Baksht told Hard Fork that it’s a different creative process every time. “Sometimes it is a long process through a lot of thoughts about concept, then composition, many sketches, I can make many changes compared to initial idea.” She continued, “but sometimes I just get it instantly, and I can see the complete painting – no tweaks, no changes needed.”

Indeed, it might be easier to get a painting onto canvas than other times, but how does an artist with no prior knowledge or experience of blockchain or cryptocurrency find their way to painting commissioned pieces that have appeared at conventions and conferences all over the world? 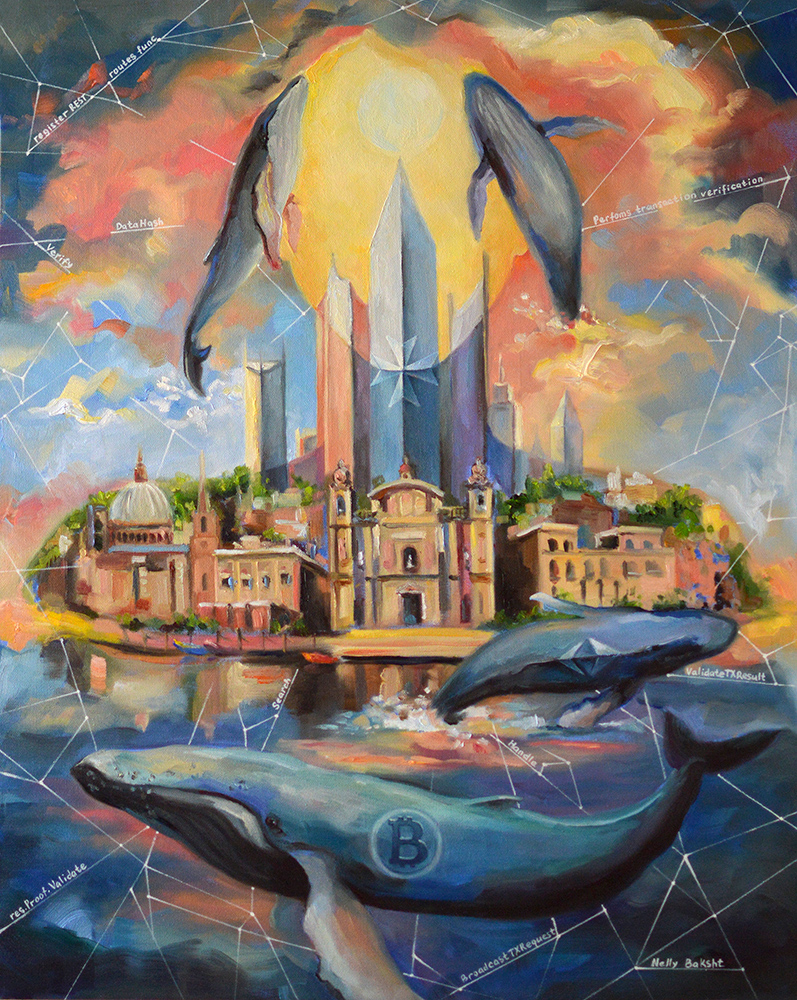 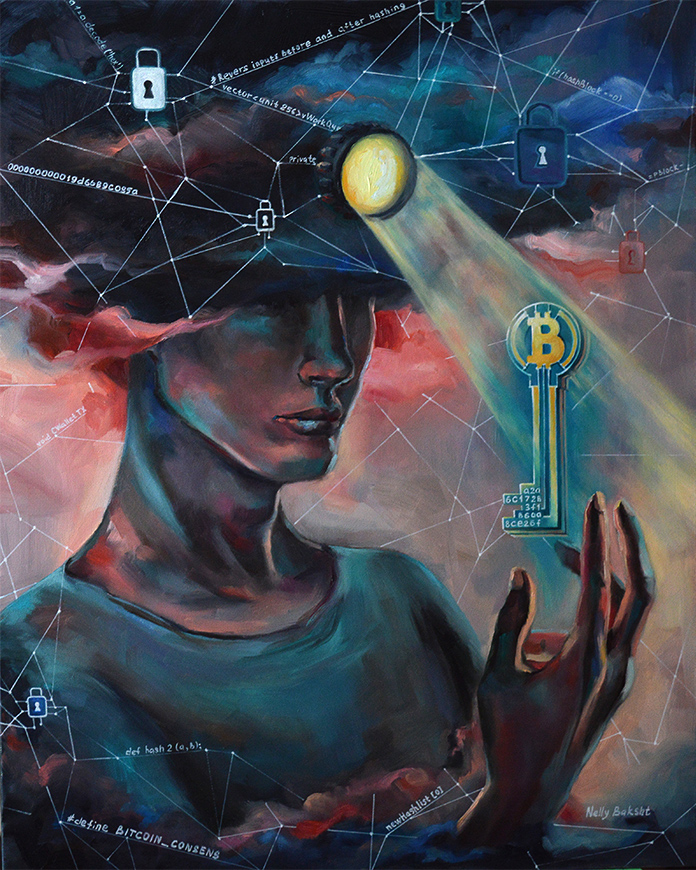 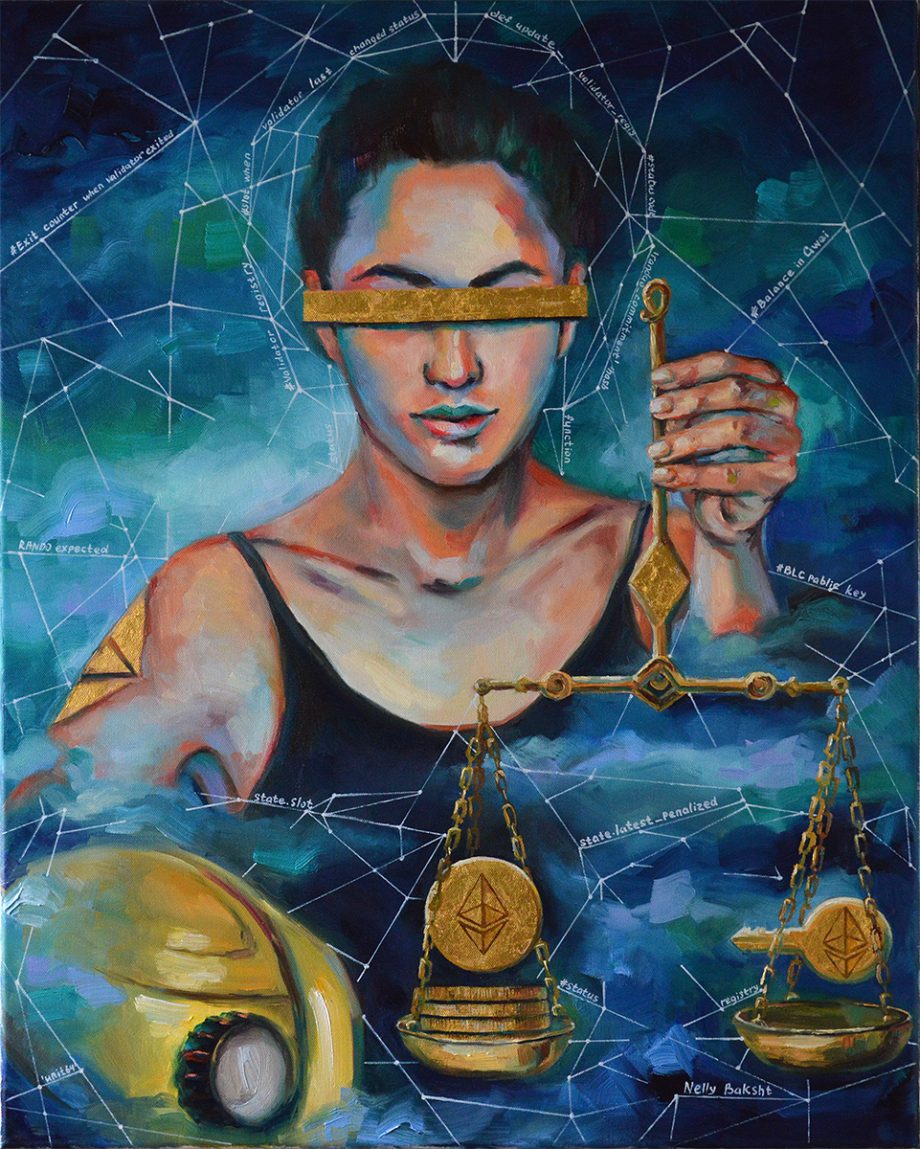 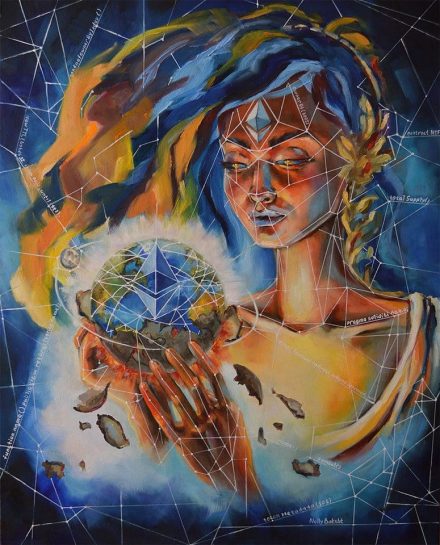 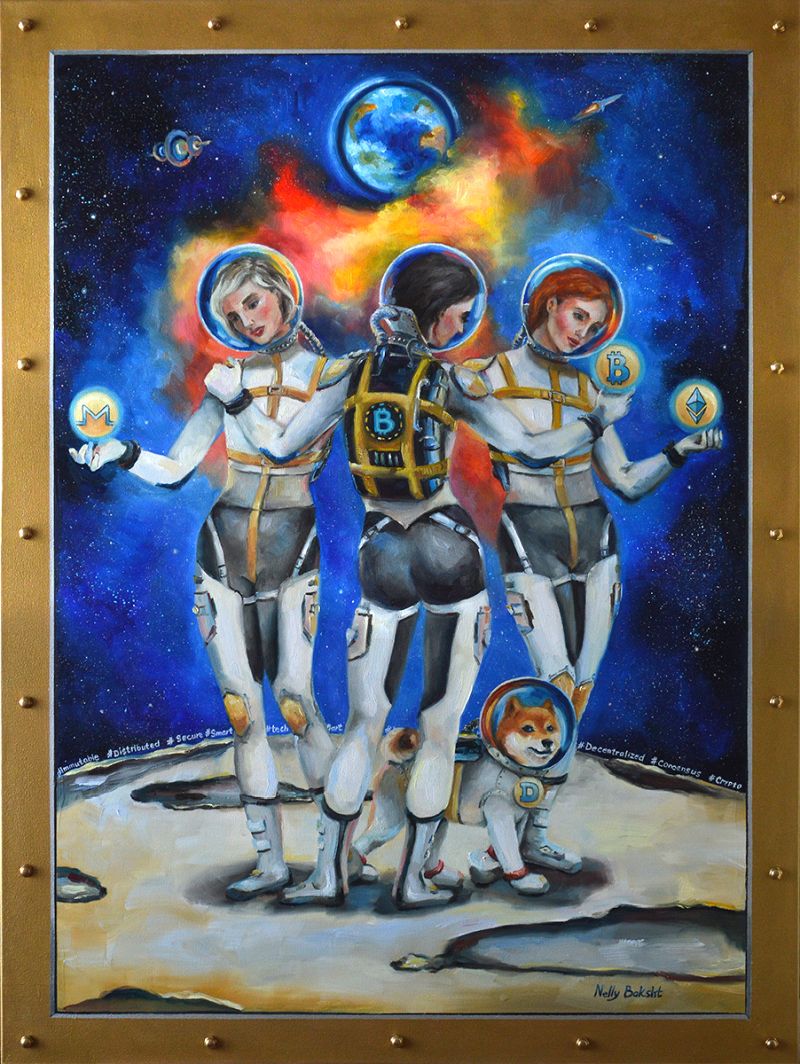 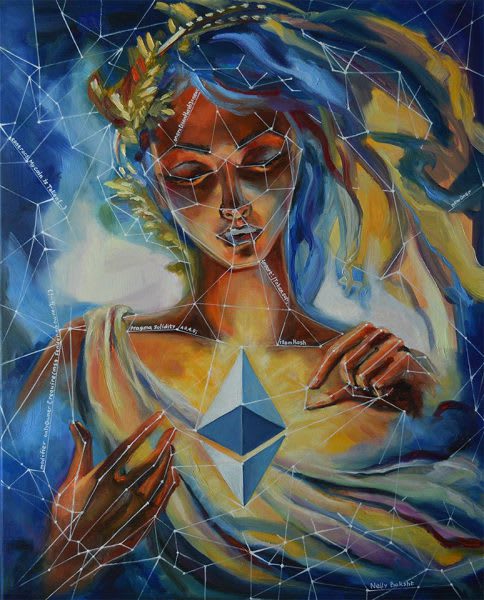 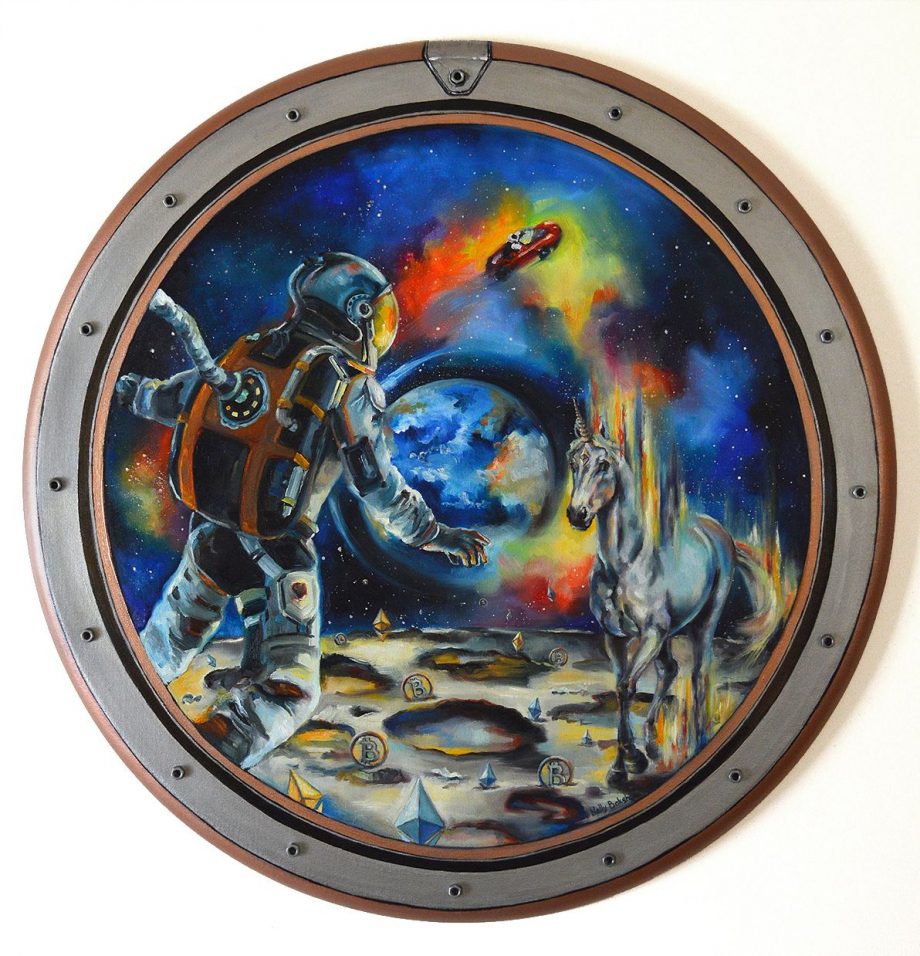 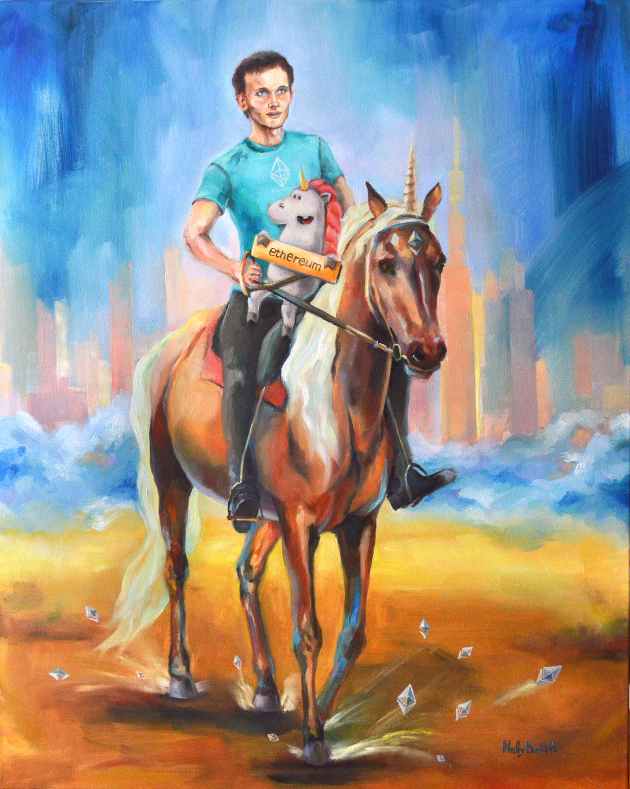 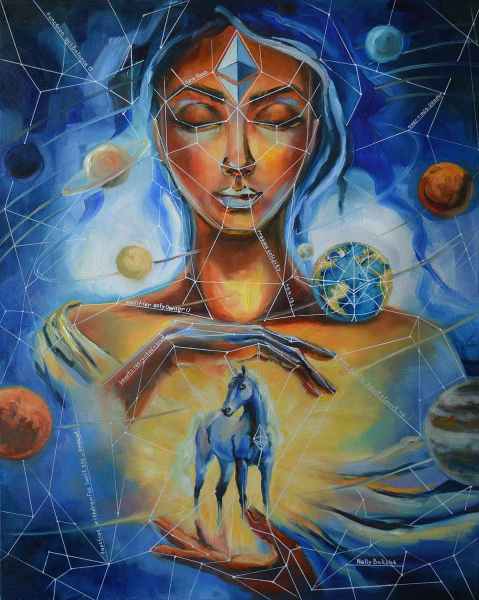 Like many of us, Baksht got interested in blockchain because of her friends, lots of whom work in computing and information technology industries. It was just a matter of time before Baksht found her way to painting cryptocurrency-based art.

“Obviously sooner or later many of them started paying attention to evolving blockchain technology. So did I.”

That said, Baksht is hesitant to call her art “cryptocurrency-based,” rather she looks to the root of cryptocurrency: “cryptography.” Her work is not focussed on pandering to the memes and rhetorics of the industry, but exploring the societal implications of blockchain, technology, and decentralization through artistic expression.

“You may find many cryptoart works about crushing modern society and financial system,” she adds. “I would like my cryptoart works to deliver a different message – [the] idea of decentralization and blockchain technology have been given to people to change the entire world into a better place to live for all of us, it is about beauty genesis not scary apocalypsis.”

But with the currently stagnant market and interest in cryptocurrencies being much lower than it was a couple of years ago, I was interested to know if this has impacted Baksht and the cryptoart world. Interestingly enough, Baksht tells Hard Fork that she hasn’t been affected at all.

“Luckily, I don’t see any decrease in interest… I take the market fluctuations philosophically: I am an artist, not a trader, and my job is to create and inspire.”

Perhaps this is a lesson we all should heed, artist or not.

Baksht’s also supporting the cryptocurrency community by accepting payment in Ether and Bitcoin – and US dollars. The authenticity of original pieces is also verified on the Ethereum blockchain. What better way to declare your love for art and cryptocurrency.