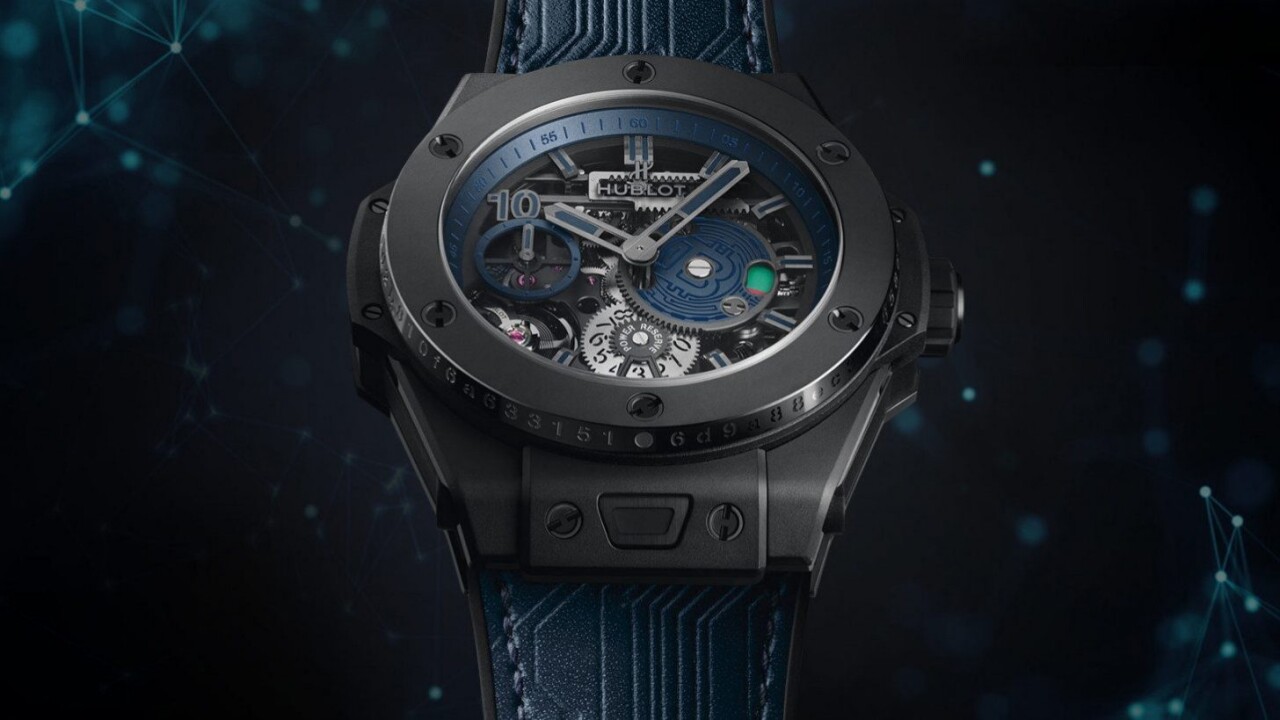 As you might expect, the new Bitcoin BTC watches are only available for purchase using Bitcoin. It’s really just a new addition to Hublot’s line of BIG BANG MECA-10 watches, but with a peer-to-peer cryptocurrency twist.

Hublot will only release 210 copies of the new P2P watch, a number referencing the 21-million Bitcoin that will ever exist.

Each watch will have a 45-mm case made from black ceramic. Every BIG BANG P2P will also have a unique identification number – relating to the Bitcoin transaction used for its purchase – engraved on the bezel surrounding the watch-face.

But of course, that isn’t enough blockchain steez for a Satoshi Nakamoto tribute-watch – oh no. The BIG BANG P2P watchband is embossed with an uber-cool blockchain design, which Hublot says represents “the interconnection network of computers on which virtual money works.”

The reveal comes with this seriously dramatic promotional video. I gotta say, that Bitcoin embedded within the watch’s movement is pretty dope.

Another cool part is the BIG BANG is backed by a 10-day power reserve, meaning that this watch can go a full 10 days before having to be rewound. “[That] number that was not chosen at random: Ten to mark the number of years the Bitcoin has existed,” reads the Hublot website.

But while the watchmaker claims that this is all part of the Bitcoin tribute, this isn’t the case. All the other watches in the MECA-10 series have the same reserves.

Perhaps, Hublot are stretching the truth a little to better market its new Bitcoin watch by playing on a happy coincidence.

As Hublot has only just debuted the watch today, at a special event, there is yet no indication as to its expected retail price on release, or even when that may be. Bloomberg reports Hublot will sell the watch for “around $25,000,” worth of Bitcoin, but Hard Fork has reached out to Hublot for clarification.

Hublot also says that Asian brokerage firm OS Limited will be handling its Bitcoin transactions, while noting the partnership represents the first time a leading watchmaking brand has opened up to accept cryptocurrency payments.

The event was apparently hallmarked by a “captivating tunnel” that treated guests to an “interactive display” detailing the world of cryptocurrency, specifically the Bitcoin payment system.

Which is all very cool, but does the watch tell me when the next bull market starts?