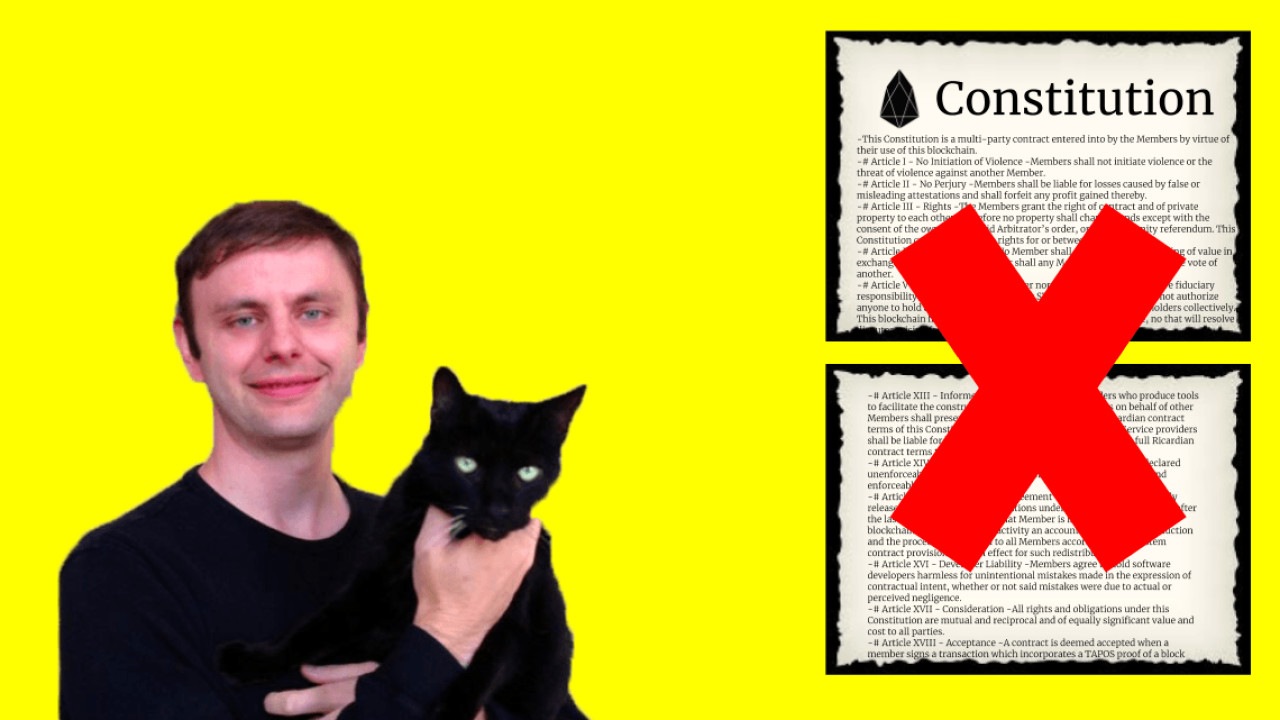 Amidst all the chaos surrounding the EOS EOS constitution, it seems Daniel Larimer, the cryptocurrency’s co-founder and technical architect, is giving up on its on-chain governance model.

In a conversation on EOSIO Gov Telegram channel today, Larimer proposed to scrap the existing constitution calling it “unwise.” Indeed, he is working on proposing a new constitution.

Larimer said that he has “learned a lot about human nature by watching the disputes, the witch hunts, the ‘bring everything before [EOS Core Arbitration Forum (ECAF)]’ mindset.” But he would now prefer to put an end to it.

The EOS governance model drew severe criticism earlier this month when EOS block producers — who act as the “executive branch” on the EOS blockchain — froze seven EOS accounts in violation of its own constitution.

The EOS constitution requires such decisions to be made by ECAF, the arbitration body of EOS. But the block producers froze the accounts without receiving any order.

This was followed by another controversy earlier this week, when a block producer EOS Store failed to comply with a different ECAF order, alleging miscommunication between the block producers and the arbitration body.

An unverified screenshot of a conversation between EOS Store representative and a Reddit user indicated that EOS Store is run by an individual, and he couldn’t comply with the order due to his private affairs — raising further heat on the matter.

We didn’t get any response from EOS Store to confirm this in spite of repeated attempts. But clearly all these controversies have forced Larimer to change his mind about letting block producers have such excessive control over the network.

My official opinion on disputes regarding stolen keys is that no action should be taken. The producers should campaign on using some of their pay for donations to make the victim whole. Damage to community from ECAF is greater than funds we hope to restore to users.

It is worth noting that following Larimer’s comments, ECAF has stopped taking complaints about lost funds. “Lost Private keys claims will be rejected,” the ECAF website displays in bold.

Most of the EOS community members are backing Larimer’s proposal. But some are arguing that it takes away the very essence of EOS.

Larimer’s comments are indeed surprising given that — until as recently as last week — he was hailing decentralized blockchain governance. In a blog post, he suggested that there is a need to make blockchain safer for users through governance, and that “code is law” is a myth.

Incidentally, under Larimer’s new proposal, the governance will be limited to just “correction of intent of code.” This is peculiar given Larimer’s frequent criticism of Ethereum running a similar model.

Many critics on social media including Bitcoin developer Jameson Lopp are arguing that Larimer and the EOS community should have seen this coming.

“This has been a learning experience” as if it wasn’t obvious that such positions of power wouldn’t be exploited?

But, say what you will — I think backtracking is still better than letting a messed up constitution govern the EOS blockchain forever.