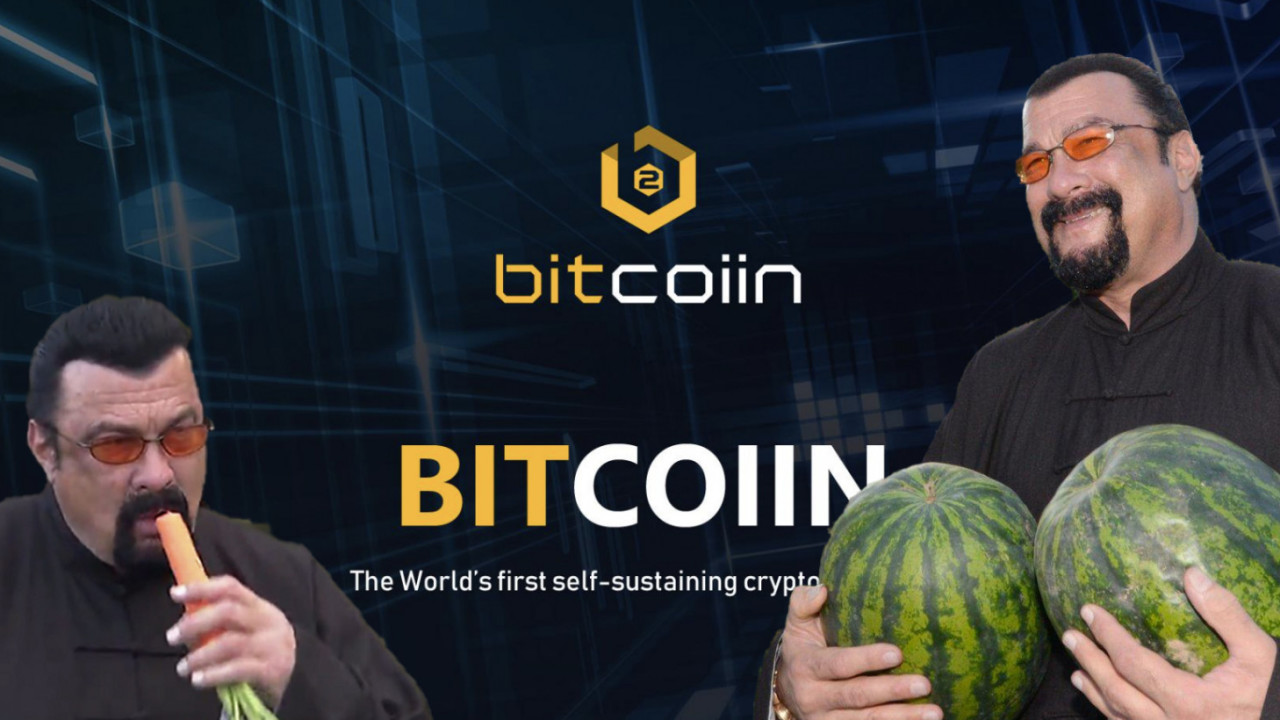 Actor Steven Seagal could be the harbinger of the ICO apocalypse. Seagal today announced his involvement with ‘Bitcoiin,’ an upcoming token that looks a lot like Bitcoin, but is built on the Ethereum blockchain.

Hollywood actor Steven Seagal has become a believer of Bitcoiin2Gen (B2G), the Hollywood action star will be representing the leading cryptocurrency, Bitcoiin2Gen, as a brand ambassador.

Glossing over the press release — which was seemingly written by a chimpanzee on bath salts — I have real questions about B2G, and Seagal’s involvement.

For Bitcoiin2Gen, the choice of Zen Master, Steven Seagal is obvious as brand ambassador, this extends our long-term commitment towards the community.

Let’s start with the zen master. Call me dense, but I don’t see how it’s obvious for this man to endorse anything other than a martial arts movie marathon on late night cable television.

As humans go, Seagal is undoubtedly one of the worst. He’s been accused of harassing, beating, and sexually assaulting multiple women. He’s settled lawsuits for employment discrimination, wrongful termination, and failure to prevent sexual harassment. And then there’s the really odd stuff, like accusations of human trafficking, cockfighting, and killing an 11-month-old puppy.

You could say he’s a bit of an asshole.

His history makes B2G’s decision to bring him on as a figurehead an odd choice. The company has already raised $10 million via its ICO, and now it’s brining on the answer to the question: What happens when you add a goatee to a walking, talking representation of the poop emoji?

Maybe I’m missing the correlation. Ah, this should help.

As a Buddhist, Zen teacher, and healer, Steven lives by the principles that the development of the physical self is essential to protect the spiritual man. He believes that what he does in his life is about leading people into contemplation to wake them up and enlighten them in some manner. These are precisely the objectives of the Bitcoiin2Gen to empower the community by providing a decentralized P2P payment system with its own wallet, mining ecosystem and robust blockchain platform without the need of any third party.

The release also makes no mention of Seagal’s compensation. According to the Securities and Exchange Commission:

Celebrities and others are using social media networks to encourage the public to purchase stocks and other investments. These endorsements may be unlawful if they do not disclose the nature, source, and amount of any compensation paid, directly or indirectly, by the company in exchange for the endorsement.

We can logically assume one of two things to be true: Seagal meditated on the merits of decentralization and decided to jump on board a fake Bitcoin, or he’s being paid. B2G didn’t respond when we looking for an answer.

As for the organization itself, it’s hard to be impressed. The white paper is what happens when 1,000 words are due, but you can only muster 200. It’s chock full of meaningless jargon and industry buzzwords and dives further into cryptocurrency as a whole than the project itself.

It has some “unique features” though, like mining… um… and trading.

Bitcoiin 2Gen focuses on the original founding father’s vision of what crypto currencies should be, while incorporating the Ethereum based blockchain, adding to the blockchain unique features such as Mining, Trading, and Staking of the coin, as well.

There is a fairly interesting “recruitment plan” you might recognize from other “definitely not a scam” projects, BitConnect and OneCoin — both of which turned out to be pyramid schemes.

B2G, for what it’s worth, told us it’s most definitely “not a pyramid scheme.” Because what else are you supposed to say, really?

Maybe B2G is a completely legit project that’s going to go on to change the world — or at least confuse it into buying a token they thought was Bitcoin. But that appears doubtful at this point. And bringing on Seagal isn’t doing much to instill confidence in an already vague project.