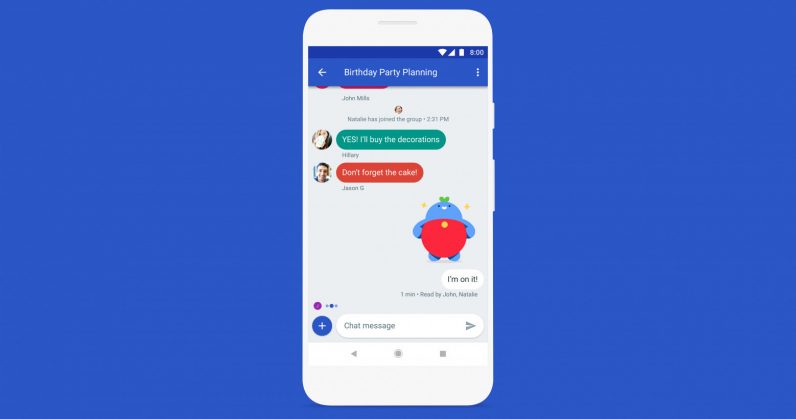 Credit: Google via The Verge

As a tech-savvy TNW reader, you may have already ditched SMS for more sophisticated messaging apps years ago, but people still send some 8 trillion texts a year – and that means that it’s worth improving the experience for those folks, and for the rest of the planet that’s yet to send their first message.

To that end, Google is building Chat, a texting experience that will replace traditional SMS on Android devices. It’s built on the Universal Profile for Rich Communication Services standard – aka RCS – and it’ll roll out sometime in the next several months. The Verge has an excellent explainer on how it’ll work:

Essentially, if you and your contact are rocking Android phones with carriers that support RCS, you’ll enjoy a bunch of modern messaging features when you text them, such as read receipts, typing indicators, full-resolution images and video, and even group chats.

You’ll be charged for the data consumed in sending your message, instead of what it’d cost on your plan to send an SMS. And if you text someone who doesn’t have Chat enabled (that includes iOS users), they’ll receive plain ol’ SMS messages.

That’s kind of like what Apple offers its iOS users with iMessage. And even Microsoft supports RCS, so it’s possible that we’ll be able to link our phones to our desktops and text people from Windows 10 machines too.

But there’s one big difference: unlike iMessage, Chat isn’t encrypted. That means that your messages will be stored on your carrier’s servers in a readable format that governments could request and access if they decide to investigate you for all your heinous crimes and criminal wrongdoings.

So, should you be excited about Chat? To be honest, there’s nothing that Chat will offer to trump your modern messaging app of choice; it’s simply dragging SMS into the 21st century. You’re certainly better off sticking with an encrypted service like WhatsApp, Telegram or Signal.

It’ll certainly be good for folks who will get started with mobile devices for the first time once Chat launches, as they’ll get to experience feature-rich texting even before they sign up for a messaging service.

It’s a huge deal for Android, and a major achievement for Google, as it’s managed to partner with some 50+ carriers worldwide and numerous hardware makers to garner support for RCS and make this possible. The company has also put development of its Allo messaging app on hold; since launching it in September 2016, it’s failed to drum up interest in Allo.

Anil Sabharwal, who’s heading up the project at Google, speculates that you should see Chat start to become available in the US by the end of the year, and more widely thereafter; the company will also continue to enhance the Android messaging app with more features, and even roll out a desktop web interface for Chat soon enough.

Read next: 11 things you need to know about your smart home devices