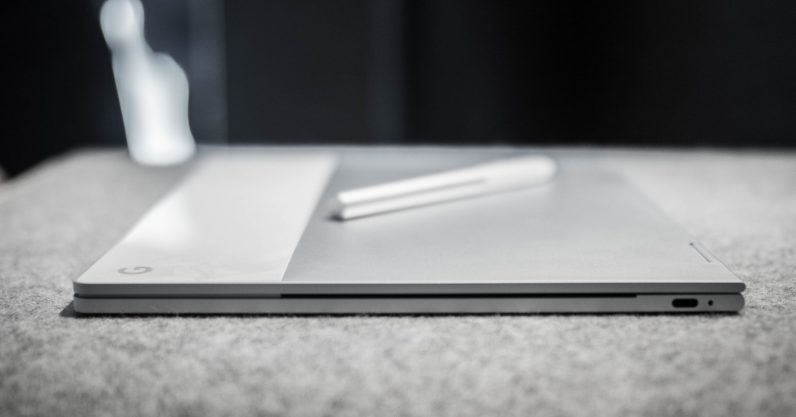 Had it not leaked just a couple of weeks ago, the Pixelbook would have been one of the more surprising announcements to come out of today’s Google event. It’s proof Google believes there’s still room for a premium Chromebook, And maybe it’s right: If you can get past the fact that it only runs Chrome and Android apps – which become more powerful every day – the Pixelbook is shaping up to be a formidable laptop.

The design is the somewhat rare combination of classy and not looking like a Macbook. The glass panel is a nice touch; it’s unique and keeps the Pixel family aesthetic. The chassis is also super thin and folds flush when you flip it over into tablet mode. Google enthusiastically claims it’s the first convertible laptop to feel like a proper tablet when flipped over. While it’s still not as good as say an actual tablet PC like the Surface Pro, at 10.3mm thin, and 1kg thick, Google isn’t really exaggerating.

But it also feels really good as a laptop too. One thing you can’t see in images is that Google is actually using a silicone material in the area flanking the trackpad, giving it a soft-touch feel instead of the usual cold, hard metal. I love the soft feel on the wrists with devices like the Surface Laptop and the Dell XPS 13, so I’m glad to see more manufacturers recognizing the fact that metal is actually not a comfortable material.

The keyboard feels reminiscent of the one’s in the new MacBook Pros; which is to say shallow travel but enticingly clicky. I normally hate these type of keyboards, but the Pixelbook’s didn’t really rub me the wrong way – maybe because I liked the soft-touch finish on them too.

The trackpad, meanwhile, was large and easy to use – no complains there so far. I briefly tried the $99 Pixel Pen, which uses Wacom technology, is tilt sensitive and features 10 millisecond latency. For comparison, the new Surface Pro and iPad Pro have 21 and 20 ms latencies, respectively. In practical terms, I couldn’t notice the pen lagging behind my actions no matter how quickly I tried doodling.

There’s one button on the pen, and Rather than being used to access an eraser or other functions, it’s used to invoke the google assistant. You can draw a circle around an image on your screen and find out more about its contents almost instantly. That was really impressive to see even in a controlled demo; I can imagine it coming in handy when trying to do research online.

In a year where shrinking bezels are a welcome industry trend, the Pixelbook’s large black borders do look a outdated. They give you something to grip on when folded over, but they’re still pretty huge even by tablet standards. But at least the display they’re surrounding looks really good, with a QHD resolution a good colors and contrast.

With a Kaby Lake Core i5 or i7 processor running Chrome OS, I expect the laptop to perform smoothly, but I can’t really imagine who would need a Core i7 with the current state of ChromeOS. Samsung’s Chromebook Pro already felt like overkill with just the i5.

Perhaps it’s a sign that Google has plans to expand its OS’ support for powerful offline apps, but right now, the i5 model makes a lot more sense.

The last part of the equation is battery life. Google is rating it at 10 hours, which sounds decidedly average, but a representative was keen to point out its estimates are based on real world usage and not cheating by simply looping video. He challenged me to put that claim to the test, which I intend to do as soon as I get my hands on a review unit.

At $999 starting with 128 GB, 8GB of RAM and a Core i5 processor, it’s certainly not as cheap as traditional Chromebooks, but it also doesn’t seem particularly outlandish either. Chrome OS may still be limited compared to Windows and macOS, but it’s getting more powerful by the day. And with design like this, maybe there really is room for a thousand-dollar Chromebook.