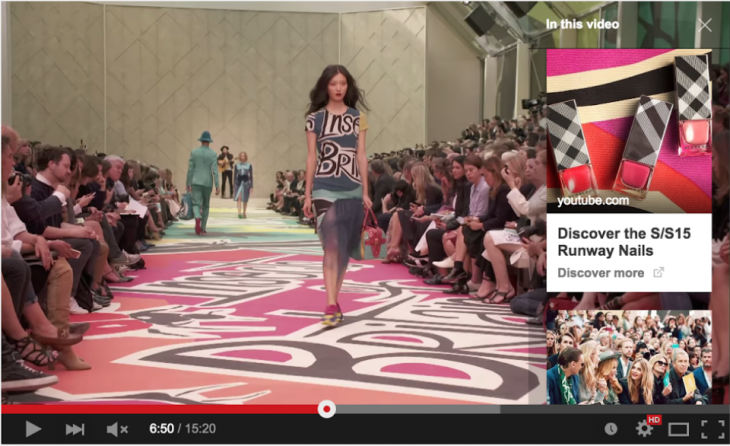 YouTube has announced that it is adding interactive cards to its TrueView video ads.

This means that marketers will now be able to add more information in overlays on top of their in-stream spots. For YouTube, this makes ads more lucrative as the company can still make money from ads even if people have bypassed them.

The old format allows viewers to skip any ad after five seconds, and the advertiser only gets billed if they choose not to skip the ad (or watch at least 30 seconds if it’s longer).

YouTube introduced cards as a replacement for annotations and now they are expanding on this by improving their capability for ads. The new TrueView cards will aim to encourage viewers to do something after watching an ad and engage with the advertiser.

YouTube will be changing how it counts views on ads with the cards as well – it will be billed as a view when someone clicks on a card, and will bill for the interaction but only as either a full view or a click, never both. The streaming service is operating off the basis that a click is a strong enough indication that the viewer is interested in engaging with the ad.

The cards will display information on brands, their products, related videos and playlists as well as links to the advertiser’s website although that feature won’t be available immediately.

While YouTube has enabled similar features in the past that allowed marketers to display more information on top of their ads, these only ever worked on desktop and were confined to text-only. The new TrueView will feature imagery and be viewable on smartphones, tablets, and eventually on connected TV devices like Apple TV and Chromecast.

TrueView ads are five years old now and YouTube has said that the number of advertisers using the service grew 45 percent in 2014, and all of the top 100 global brands have run TrueView ads in the past year.

Read next: Roundup: The first reviews of the Apple Watch