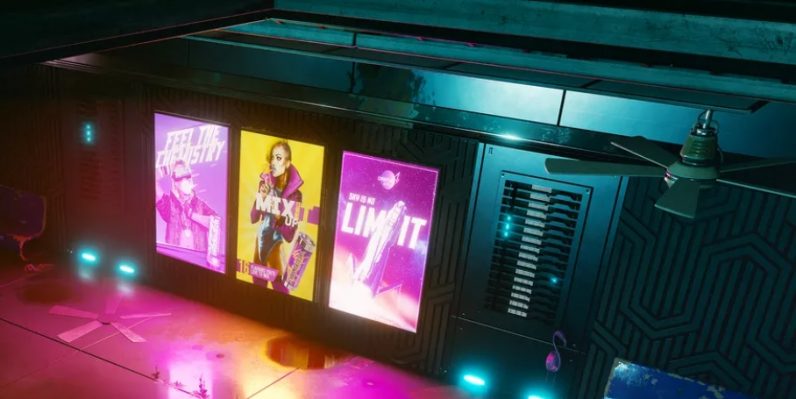 Every queer person on the planet could sense it, like a disturbance in The Force, when the review embargo lifted for CD Projekt Red‘s Cyberpunk 2077.

I’m picturing meerkats popping up in unison as I write this. But the truth is that a lot of queer gamers were waiting with bated breath to see how things were going to play out.

Background: CDPR made the questionable decision to include an in-game fictional advertisement for a fictional beverage. The ad (from Polygon’s screen capture):

So what we have here is an in-game ad for a drink being marketed as a way to “Mix It Up.” It features a feminine-appearing person with an erect penis-shaped bulge inside their clothes. This is problematic. It portrays trans people as exotic and abnormal. And it’s hypersexual. It tells people who have no day-to-day interaction with trans people that those people are deviants, sex objects, or both.

Naturally, many trans people and their allies took umbrage to this. But CDPR was undaunted. When Polygon’s Charlie Hall interviewed the artist responsible for creating the advertisement, they had this to say:

Cyberpunk 2077 is a dystopian future where megacorporations dictate everything. They try to, and successfully, influence people’s lives. They shove products down their throats. They create those very aggressive advertisements that use, and abuse, a lot of people’s needs and instincts. So, hypersexualization is apparent everywhere, and in our ads there are many examples of hypersexualized women, hypersexualized men, and hypersexualized people in between.

That’s a fine sentiment, and it might make sense to someone without a horse in this race. But, as Polygon’s Stacey Henley recently pointed out:

I don’t buy it. While a cutting critique of queer commodification might have been part of the idea’s nucleus, the outcome is a commodification itself, objectifying trans people as creatures of deviance, defined by their genitals and suitable only for sexualization or rejection.

And I don’t buy it either. Henley goes on to point out that CDPR has a long history of being called out on social media for transphobic “jokes”. Worse, CDPR tripled-down on its questionable behavior by making a cis-gender cosplayer portraying “Mix It Up Girl” a finalist in a contest it held. The model then defended her portrayal of “Mix It Up Girl” by stating that cis people also face harassment and violence — note: trans people are significantly more likely to be the victim of violence than cis people.

All people have their own struggles. Many cis men and women face acts of harassment and violence on a daily basis as well

Here’s what’s wrong with that: It’s simply not appropriate for a cis person to portray a tragically offensive trans character.

And finally (no, I haven’t forgotten to make good on what this article’s headline promises): the plot twist here is that Cyberpunk 2077 is among the first highly-anticipated AAA games purported to have a queer-friendly character creation system. But let’s just pump the brakes a second here because it’s not.

Henley put it best in their article:

The fact that Cyberpunk has fixated on the junk as the ultimate feature of a trans person, yet given no consideration for voice, and then repeatedly joked about customizable genitals in its marketing efforts, shows the complete lack of a trans perspective in both the design and in the advertising of the game.

I was excited for this game. Finally! A character creator that gives players realistic choices instead of arbitrarily-limiting social constructs!

Instead, it just appears that someone simply said “well, just remove the gender references then.” The game’s played in first-person. As Henley points out in their article, that means you won’t see your character’s junk but you will hear their voice.

Okay, enough background. You were promised answers to some of the stupidest questions in gaming and you’re going to get them. Starting with: why “queer people are so mad” about something as silly as a canonical piece of fictitious advertising in a cyberpunk dystopia.

I’ll also cover: why do queer people want to ruin video games? Why does every game have to have queer people in it? And why can’t queer people just make their own games?

Because, as many fearful gamers have predicted, at the rate things are going every single game from Mass Effect to Madden, from Metal Gear to Myst, will have to be at least 50% queer, right?

No. Those are all stupid questions.

Queer people don’t want to ruin video games. When we say we want representation, we don’t mean we want developers to just go queering up their games all willy-nilly. We just want fair representation.

And we do make our own games. They’re excellent. But those games don’t do as much to sway how straight/cis people see us as the AAA ones that portray us negatively.

Outside of “queer games,” queer representation in gaming is abysmal. The number of openly queer characters are few and far between and, more often than not, we’re portrayed as promiscuous deviants.

And when we’re given providence to create queer characters or play our characters as queer, we almost always end up with a Mass Effect situation where queerness is directly, and exclusively tied to romantic and sexual situations. Despite the fact that my Dragon Age character lives in a world where people are openly racist and devoutly religious, for some reason my character’s queerness almost never matters unless I’m trying to bed someone.

Queer characters are often “quirky” villains, promiscuous allies, and tragic background characters but they’re seldom the reliable hero (or anti-hero, as the game’s lore might prescribe). And even when we are – there’s a kickass non-binary robot in Borderlands 3 – we’re still not normal, FL4K’s an inhuman construct.

There are exceptions, but ultimately “thirsty and untrustworthy” are how most queers are portrayed in mainstream video games.

We don’t want to ruin your games. We simply want them to better reflect the realities of our existence. So to answer all of those stupid questions in one sentence:

No, we don’t want to ruin games or make every game queer but when you do put us in games make sure you’re using us in a way that’s consistent with reality.

Instead of treating the LGBTQ community like it’s a problem for video game developers to overcome, it’s time these companies recognized we’re the solution.

Read next: How to choose a startup accelerator — no matter what’s happening in the world