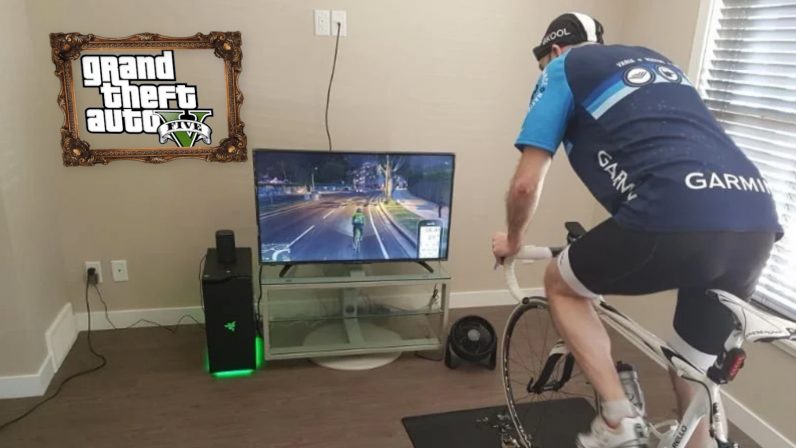 With lockdown measures enforced around the globe, exercising indoors has had a bit of a boom — particularly indoor cycling. Online video game-like training platforms like Zwift have brought new realms of realism to the activity, but this ingenious GTA V mod has taken it to a whole other level.

In short, the GTBikeV mod lets you ride your real bike around GTA V’s massive virtual world, Los Santos, almost as if you were actually there. The mod allows you to connect your bike and smart trainer to the game, so as you pedal your indoor exercise bike, your in-game character explores the virtual world.

Before you ask, yes you can ride on the highways and get wasted by reckless drivers — just like real life. And yes, you can also fire a gun and perform ride-by shootings if you really want to, although this might prove tricky because you need to cycle and use a conventional game controller at the same time.

Once you’re up and running — former bike racer and cycling YouTuber Chris Pritchard has a video showing you how to do that — you simply hop on your bike and smart trainer as you would if you were in Zwift, Sufferfest, or any other virtual cycling platform.

GTBikeV mod borrows many of the principles that has made Zwift so popular among cyclists. It controls the resistance of your smart trainer to replicate the gradient of the road in Los Santos. It displays key performance metrics on a virtual bike computer in the lower right of the screen. And it has predetermined routes so you can get training with minimal fuss.

You have a couple of options when riding around Los Santos: you can pick to ride one of three premade routes or you can “free ride” and explore the world. You can also control your character’s steering using a keyboard or controller, or set it to “auto drive” and the mod will take care of the rest, pretty much how Zwift does it now.

The best bit though, is that the mod automatically generates a .FIT file as you ride. In other words, it means you can upload your ride to Strava once you’re done and brag to all your friends about how you took the KOM on Vespucci Beach.

Unfortunately for now, this GTA V mod is only available in single player story mode. So there’s no meeting up with your friends and racing up Mount Chiliad, no opportunity to pull up alongside a stranger and challenge them to a bicycle-based drag race down the highway, and no way of busting a cap in the ass of your cycling friends.

Seeing as this is a mod, it’s understandably a little buggy. It looks like its creator, Makinolo, only uploaded the first released about a week ago, and has already ironed out a few issues already.

The thing that really excites me though is that this is an indicator of where virtual cycling could go. While platforms like Zwift focus on cycling and training — and do a damn good job of it — GTBikeV was borne of gaming. As CyclingTips’ coverage points out, GTA V’s open world cost around $130 million to develop; it’s massive, beautiful, detailed, and perhaps as close to the real world as we can get.

It’s got me thinking about what other virtual worlds I’d love to see remade as cycling platforms. I wonder what it would be like to cycle into Damascus rather than ride in on Altaïr’s horse. But why stop here? Why not strive to make the most perfect world for cycling possible? Anyway, I digress.

The biggest draw back with Zwift is that it doesn’t look particularly pretty. From a gaming standpoint it’s a little linear too: you have to stick to roads, you can’t steer, and the graphics are very 2005. It’s not entirely fair for me to say this because Zwift is designed to work on everything from phones to high-end gaming PCs, and it’s first and foremost a training and virtual racing platform which it does a far better job of than GTBikeV.

Even though it’s far from perfect, it’s got me incredibly excited about the future of indoor cycling. Platforms like Zwift have pretty much nailed how the game interfaces with smart trainers, but the gaming experience leaves a lot to be desired.

In the near future, I’d love to see these two worlds collide. If devs could blend the online multiplayer racing mechanics of Zwift into virtual worlds as rich and luscious as Los Santos, I’d put money on it being a massive hit. It would also leave me scratching my head asking: why bother ever going outside again?

Read next: There’s an actual science to good Instagram photos