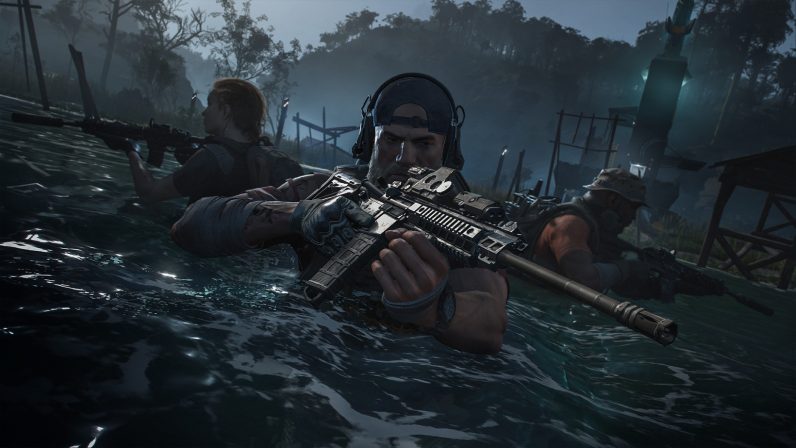 There may not be a new Assassin’s Creed this year, but that doesn’t mean there’s no big open-world Ubisoft game to play. It’s Ghost Recon: Breakpoint’s turn to serve us with the all-too-familiar Ubi-formula of a huge open map filled with a thousand little icons to explore.

It isn’t Ghost Recon’s first foray into open world territory; 2017’s Ghost Recon: Wildlands was Ubisoft’s previous attempt to apply this format to the tactical shooter series. Unfortunately I’ve never played it, I was led to believe Wildlands was best enjoyed in co-op with a couple of friends, and my little gaming crew never got around to it. This time around, I convinced the boys to start playing Breakpoint with me.

Ghost Recon: Breakpoint is set 4 years after the events of Wildlands. The real-world Bolivia locale from the previous game is swapped out for a fictional island, called Auroa. The opening minutes of the game show a ‘Libertarian utopia’ city that has gone off the radar, and the player character being sent to investigate, only to have their helicopter taken down by swarm of hostile drones.

Shortly after the intro you encounter the game’s main antagonist (played by Punisher-actor Jon Bernthal) and you get introduced to the game’s main hub area, Erewhon. After that, you’re free to explore Auroa on your own. Either by vehicle, helicopter, or on foot.

The island is overrun by bad guys, but you get a decent arsenal to deal with them. There’s a big variety of guns, an assortment of consumable items like medkits and grenades, and, most importantly: your drone. You can deploy your drone whenever you want and fly it around to scout enemy locations and other hazards. These get conveniently marked in your UI, so you can easily keep tabs on your foes.

You’ll need to utilize every tool in your arsenal if you want to stand a chance, because the opposition is vicious. Breakpoint is not made to be played like an action game; it basically begs you to take your time, plan your attack, and be very wary of your surroundings. When you play by the game’s rules, it’s enjoyable — sometimes even satisfying. Simply scouting out an entire camp, picking off enemies one-by-one with your sniper rifle, and stealthily making your way to the objective feels good. It’s especially fun if you do it with a group of friends that wants to play by the game’s rules too — but you’ll have to find some very patient friends.

Unfortunately, mine weren’t. After encountering a plethora of weird bugs and egregious microtransactions, my friends bailed on me, and I don’t blame them. Breakpoint reminds me of how bad Assassin’s Creed: Unity was at launch. Missing guns, flying player models, disappearing helicopters, frozen NPCs; we’ve seen it all. The performance isn’t as bad as Unity’s (on my PS4 Pro at least), so I wouldn’t say it’s unplayable. The bugs just constantly take you out of the immersion. See for yourself:

After my friends dumped me, I decided to give it a go on my own, only to be frustrated by how Breakpoint feels when you don’t play exactly by its rules. Like I said, it’s all fun and games when you’re sneaking around undetected, but as soon as you’re spotted by one of the many soldiers, drones, tanks, or helicopters, you’re fucked. These scenarios have always been a problem for games that emphasize stealth, but I have rarely been as frustrated as with Breakpoint. It’s simply not fun to fight a massive tank drone with a sniper rifle and a health bar that depletes after a handful of enemy bullets.

Even if everything worked perfectly, Breakpoint still would have little to offer that other Ubisoft games with the same formula don’t already. The worlds and the stealth action in Assassin’s Creed games are vastly more interesting — blowing shit up with helicopters is better done in the Far Cry series, and if you’re looking for a good co-op military shooter you’re better off playing The Division 2. You can also just buy Wildlands for about half the price of Breakpoint. That’s what I’m going to do, I just hope my friends are down to give it another go.

Read next: The 4 biggest product launch mistakes — and how to avoid them