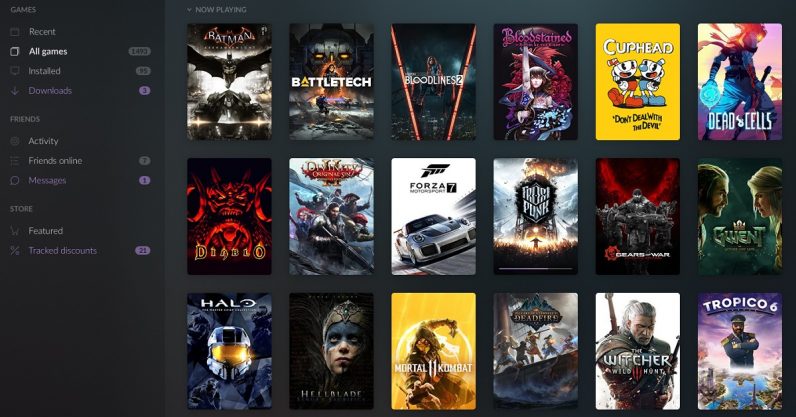 Good Old Games (GOG) has long been Steam’s quirky alternative in the world PC stores, and is now putting itself in the unlikely position of peacemaker with the launch of GOG Galaxy 2.0. With this updated platform, GOG intends to combine all your disparate gaming libraries in on place, inadvertently providing a solution to a current problem for PC gamers.

You might have heard some scuttlebutt over the last few months that the PC gaming community is a little divided over platforms — I’ve written one or two articles on the topic. The gist of it is that a factor in the current “store war” between Epic Games and Valve’s Steam is that some gamers believe having different platforms for their games is an inconvenience they shouldn’t have to put up with. The underlying complaint is that Epic’s dividing the community and forcing gamers to come to their store by allegedly buying exclusivity deals with game publishers. Others say having more than one gaming library isn’t as big of a deal as critics are making it out to be.

However, GOG Galaxy is hoping to eliminate that problem entirely with its Galaxy 2.0 platform. One of the biggest features of this new release is the ability to import games from your various libraries into your Galaxy library. This means that, while they won’t technically “move” anywhere, you’ll be able to launch games from your GOG, Steam, Epic Store or anywhere else. The platform will allow for both automatic integration, and manually adding games not connected to any platform.

And, while you won’t be able to launch them on PC, GOG will apparently allow you to list your PlayStation and Xbox games in the library as well, meaning you’ll have a complete picture of every game you have. GOG will even graciously fill in metadata about the games, including cover art. According to GameSpot, the company are working on Switch integration as well.

GOG claims that all the games will work as they would on the platform you purchased them on, provided you still have the platform installed somewhere on your computer. Games will be automatically updated, saves will be backed up to the cloud, and you’ll be able to both play with and chat with your friends on different platforms. GOG also says it’s completely private and the company won’t be sharing your data with anyone, and the client is, as always, not necessary for playing your GOG games (in other words, you don’t have to use this platform at all, which is nice).

It’s worth noting Discord does something similar with its Universal Library, but, having used this feature myself, I can tell you it’s neither as reliable nor as usable as it would probably like to. For starters, it doesn’t access games from any of the weirder platforms I have — or my GOG library, for that matter. There have also been myriad launchers that do this as well, but it’s cool to see from a company whose launcher I already have installed on my PC.

This doesn’t solve the store war’s underlying issues of consumer mistrust and platform preference. But for gamers who’ve succumbed to the need for multiple libraries, Galaxy 2.0 could be the tool that eliminates one of the major inconveniences the store war has caused. For me, it’ll just be a relief to be able to play every game I might want to play on my PC without having to remember exactly where I bought which game and keeping several different launchers updated.

You can sign up for the Galaxy 2.0 beta here.