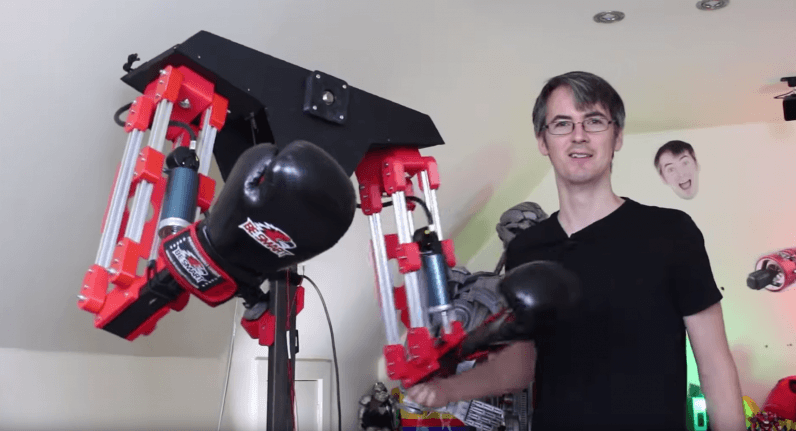 Since the 80s, fighting games have been a raucous good time, a way to blow off some steam while digitally beating an AI opponent to smithereens. In the VR world though, these same characters might one day fight back — physically.

James Bruton, a robotics engineer and YouTube creator, teamed up with a group of students from the University of Portsmouth to create a robot that fights back when provoked. It’s a thing we’ve all dreamed about since childhood — a robot that hits back during fighting games — but after seeing it, I’m not so sure I still want one.

The robot is powered by an Arduino Mega interface and trackers from HTC’s Vive headset. It has robotic wheels, mounted to a wooden base, and pneumatic arms meant for beating the shit out of human foes. Many of its moving parts were 3D printed, meaning this concept might not be as expensive as you might assume — down the road, anyway.

Currently the robot is only capable of playing a custom-made fighting game, but imagine the possibilities offered by Smash Bros. or old-school classics like Mike Tyson’s Punch-Out. I’d pay for that. Well, I’d pay to watch it beat the crap out of my colleagues at TNW, anyway.

It’s definitely a cool concept, but as The Verge’s Dami Lee said, if you want to experience getting hit while playing video games, it might be worth getting an older sibling, instead.

Read next: Over 650,000 Game of Thrones fans sign petition to remake Season 8